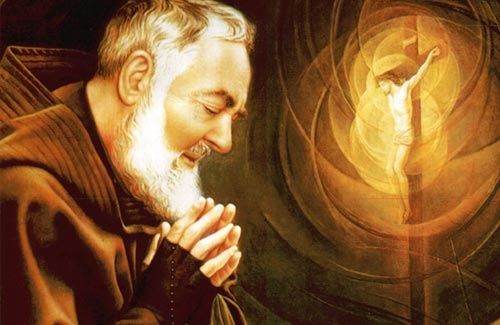 On 21 June 2009, Pope Benedict XVI made an apostolic journey to San Giovanni Rotondo in Italy, where he spoke eloquently about the first priest in the history of the Church to receive the five wounds of Christ.

Pope Benedict said, ‘Some saints have lived Jesus’ experience intensely and personally. Padre Pio of Pietrelcina is one such. The stigmata that marked his body closely united him with the Crucified and Risen One. A genuine follower of St Francis of Assisi, like the Poverello he made St Paul’s experience his own, as he described it in his Letters: ‘I have been crucified with Christ; it is no longer I who live, but Christ who lives in me’ (Gal. 2:20). Like Jesus, Padre Pio did not have to battle with earthly enemies, in radical combat, but rather with the spirit of evil (cf. Eph. 6:12). The greatest ‘storms’ that threatened him were the assaults of the devil, from which he defended himself with ‘the armour of God’. Together with St Francis and with Our Lady whom he so deeply loved and made loved in this world, may he always watch over all of you and protect you.’

The stigmata to which the Pope referred were received on 22 October 1918. St Padre Pio wrote to his spiritual advisor Padre Benedetto, describing how he received the stigmata:

‘On the morning of the 20th of last month, in the choir, after I had celebrated Mass, I yielded to a drowsiness similar to a sweet sleep. All the internal and external senses and even the very faculties of my soul were immersed in indescribable stillness. Absolute silence surrounded and invaded me. I was suddenly filled with great peace and abandonment which effaced everything else and caused a lull in the turmoil. All this happened in a flash.

While this was taking place, I saw before me a mysterious person similar to the one I had seen on the evening of 5 August. The only difference was that his hands and feet and side were dripping blood. The sight terrified me and what I felt at that moment is indescribable. I thought I should die and really should have died if the Lord had not intervened and strengthened my heart which was about to burst out of my chest.

The vision disappeared and I became aware that my hands, feet and side were dripping blood. Imagine the agony I experienced and continue to experience almost every day. The heart wound bleeds continually, especially from Thursday evening until Saturday. Dear Father, I am dying of pain because of the wounds and the resulting embarrassment I feel in my soul. I am afraid I shall bleed to death if the Lord does not hear my heartfelt supplication to relieve me of this condition…not the wound or the pain, which is impossible since I wish to be inebriated with pain, but these outward signs which cause me such embarrassment and unbearable humiliation.’

One of the striking features about the account is that St Padre Pio did not ask for the pain to go, only the external signs of the pain. This supplication goes indeed to the heart of his earthly mission – to suffer as much as was bearable for the good of souls. His letters bear testimony to this fact, and are a fantastic insight into the mind of the saint. In one letter to his spiritual advisors he writes: ‘the most certain proof of love is to suffer for the one we love and since the Son of God suffered so much for pure love, there can no longer be any doubt that the cross carried for him becomes lovable in proportion to our love.’

However, for St Padre Pio this suffering must always be combined with a child-like trust in the Father’s will, and so it must not be borne grudgingly, but in fact joyfully and for reparation of the Father’s justice. In another letter he says, ‘I have no wish whatsoever to have my cross lightened, for it is a joy for me to suffer with Jesus,’ and, ‘I should reproach myself if I sought to be without suffering for one single moment or, worse still, if others tried to take this privilege from me.’ The stigmata were independently verified by Vatican medical officials on several occasions.

St Padre Pio’s fame soon spread throughout Italy, bringing him even worse sufferings. In the immediate aftermath of receiving the stigmata his presence at the friary of San Giovanni Rotondo (Italy) began to draw a fanatical following, as well as stirring up a great deal of suspicion and opposition. In an attempt to calm the frenzy, for a period of two years from 1931 to 1933, the Vatican decided not to allow St Padre Pio to appear in public, either for confession or public Mass, and he was only permitted to celebrate Mass in a private chapel in isolation. This period was named ‘my imprisonment’ by St Padre Pio, but he always maintained that it was God’s will since it came from his superiors. A favourite maxim of St Padre Pio was to ‘pray, hope and don’t worry’ and, although stretched to its limit in this period, it served him well.

‘I have no wish whatsoever to have my cross lightened, for it is a joy for me to suffer with Jesus’

When St Padre Pio came out of exile and resumed his earthly ministry, the fanaticism did not, however, stop. In order to make things more orderly when hearing confessions, in which he was engaged for anything from eight to eighteen hours a day, a ticket system was introduced. In the hearing of confessions, another supernatural element of St Padre Pio’s ministry was apparent, for he was widely reputed to have the ability to read souls. An Albert Cordone related, for example, how a neighbour of his went to confession three times and each time St Padre Pio said, ‘Try to remember the other sin.’ Each time the lady in question had to say she did not know what he was talking about until the priest replied after the third time that ‘He could have been a good priest.’ The woman had had an abortion, and finally, following this prompting, she made a confession, claiming she did not know abortion was a sin. Cases like this are not isolated.

The priest’s fame soon spread outside of Italy, particularly with the Second World War, which brought many American soldiers to San Giovanni Rotondo. Almost all the testimonies from these men speak of the incredible, supernatural element to the Mass that St Padre Pio celebrated. Masses were said to last as long as two hours, and several of the soldiers’ accounts reported that he really lived the Mass, particularly the recounting of the Lord’s Passion which was said to send St Padre Pio into involuntary spasms and visible pain. He was often described as being in some sort of dialogue which lasted for long periods of time, where it is thought he was recommending souls to God. The priest also thought it was important for people to be with the Lord for as long as possible. The silence which follows our consuming the Sacred Host may last a minute or two with other priests, but St Padre Pio left as long as forty-five minutes for people to take in and savour their union with God.

A favourite maxim of St Padre Pio was to ‘pray, hope and don’t worry’

There is, of course, much more which can be related on the sufferings of St Padre Pio. Pope Benedict XVI’s assertion of the ‘assaults of the devil’ is by no means a vague, allegorical account. Speaking about the tempter in a letter to his spiritual advisor Padre Agostino, dated 18 January 1912, St Padre Pio relates: ‘The ogre won’t admit defeat. For the past few days he has paid me visits along with some of his satellites armed with clubs and iron weapons… I cannot tell you how many times he has thrown me out of bed, and dragged me around the room. But never mind!’ St Padre Pio made it clear in his letters that his fight with evil was real, intense and at times brutal, and amazingly took place in twentieth-century western Europe!

Because of the brevity of this article we have not even touched upon other supernatural phenomena, such as St Padre Pio’s ability to bilocate. It was clear, however, to those who came into his presence that in their midst was a living saint. He was canonized by Pope John Paul II in June 2002.

His legacy of prayer and intercession lives around the world. In the UK there are 230 St Padre Pio prayer groups, who are called to pray for the needs of the Church, for the sick and for spiritual direction. These prayer groups were originally set up by St Padre Pio himself, as he was acutely aware that prayer and suffering could save souls and save the world. So I leave you with a prayer calling on him:

‘Almighty God, you gave the Capuchin priest, St Pio of Pietrelcina, the immense privilege of sharing in a unique way in the Passion of your Son. Grant me through his intercession the graces I ardently desire…’

« Newman on Lent
My Journey back to Church »