Sister Dorothy Stang – The Angel of the Amazon 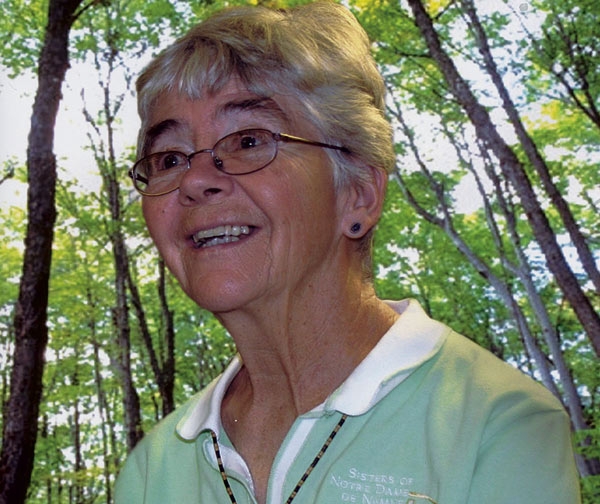 She was a 73-year-old woman who did not fit the familiar template of a martyr. Yet Sr Dorothy Stang, a Sister of Notre Dame and ‘Angel of the Amazon’ as she has been called, encountered the disenfranchised, impoverished, oppressed people of the Amazon Basin and fell in love with them. She took up the cause of whole villages, helpless before the treachery, violence and greed of the ranchers and multinational logging companies as they destroyed homes, despoiled the land and laid waste the Brazilian rainforest, and she loved the indigenous population even at the cost of her own life. Jesus said that the greatest love is the preparedness to lay down one’s own life on behalf of others (John 15:13). Sr Dorothy Stang followed his words to the letter.

The Sister of Notre Dame did not think of herself as courageous: stubborn, persistent and a thorn in the flesh of the Brazilian authorities and the loggers, yes. Perhaps there were moments when she felt anxious, or even angry in her dealings with officialdom, but missionaries don’t always see things from the outside. Identifying with the needs of the people amongst whom they find themselves, they join their struggle for justice, accepting the consequences whatever they might be. It is impossible to be a missionary in today’s world without also thirsting to achieve justice for the ‘little ones’, so often trampled upon by those who are big and important in the eyes of the world.

Over the last twenty years 1,400 people have been killed during land conflicts, but logging and intimidation continueSr Dorothy Stang was a missionary and, in common with other missionaries across the world, could say with the biblical Ruth, ‘Where you go I will go, and where you stay I will stay…Your people will be my people and your God my God. Where you die I will die, and there I will be buried’ (Ruth 1:16-17 NIV).

Sr Dorothy, an American from Ohio, lived in Brazil for almost forty years, supporting the rural poor amongst whom she spent most of her days. The indigenous people frequently occupied land without an official piece of paper to prove their ownership of forest they had inhabited since time immemorial. Knowing the unique value of the rainforest to the world’s ecosystem, Sr Dorothy worked with the villagers, helping them to develop a stable agricultural system which would provide them with food and employment. She also started thirty-six schools and twenty-one health clinics. She tried to start a radio station, but her opponents set it alight and destroyed it. Over the last twenty years 1,400 people have been killed during land conflicts, but logging and intimidation continue.

Logging companies easily obtained the necessary permissions to fell huge tracts of the rainforest, even if it meant dispossessing the local population, whom they did not compensate for the loss of land, home and livelihood. Inevitably, the loggers and Sr Dorothy found themselves in direct confrontation as she sought to protect the rights of the people. Loggers accused her of supplying peasant farmers with guns and issued death threats. Yet Sr Dorothy refused to be swayed from her purpose, saying, ‘I don’t want to flee, nor do I want to abandon the battle of these farmers who live without any protection in the forest. They have the sacrosanct right to aspire to a better life on land where they can live and work with dignity while respecting the environment.’

It seems that Sr Dorothy had a premonition of her death. She and her brother David enjoyed a very close relationship. On 11 February 2005, the feast of Our Lady of Lourdes and the night before her murder, she rang him, saying, ‘I’m a little concerned this time’ about negotiating the familiar road through the jungle to a village where, the following morning, she was to attend a meeting. David attempted to persuade her to change her plans but, with her customary determination, his sister refused.

The next morning, Sr Dorothy set off for the village, as it happened, alone, as the man who was to accompany her was delayed by a few minutes. Two men, Rayfran das Neves Sales and Clodoaldo Batista, employees of a local landowner, blocked her path and demanded to know if she carried any weapons. As usual, she carried only a bag containing a few letters, legal documents and her Bible. The man who was to have accompanied Sr Dorothy to the village later reported that she replied, ‘This is my only weapon’ and proceeded to pull her Bible from her satchel.  Opening the book at St Matthew’s Gospel, she started to read aloud the Beatitudes (Matt. 5:3-12). When she had finished reading, she closed her Bible and started to walk away. It was at that moment that they opened fire and shot six times at point-blank range. The killers and Sr Dorothy’s would-be companion all fled, leaving her dead in the road, where she was found six hours later.

She replied,‘This is my only weapon’ and she proceeded to pull her Bible from her satchelNews of Sr Dorothy’s murder reached beyond the Amazonian villagers to the whole world. The local people themselves set out en masse to be present at her funeral, which several thousand attended.  One of the Sisters of Notre Dame present said that she had overheard a peasant farmer reflect, ‘Today, we are not going to bury Dorothy; we are going to plant her’. They truly saw her as the ‘grain of wheat that fell to the ground and died in order to bring forth a hundredfold’ (cf. John 12:24).

Sr Regina Reinart, a Medical Missionary of Mary, wrote: ‘She had met her assassins the night before she died, and had advised them not to do what they were planning to do, but to be good fathers to their children, to look after their land and to sow the seeds of justice.’ There are echoes of the words of Jesus at the Last Supper!

Nobody in their right mind sets out to be a martyr. It is something that happens along the way. We have a time-honoured saying that ‘the blood of martyrs is the seed of the Church’. Whether or not Sr Dorothy is ever officially proclaimed a martyr by the Church, many already see her as such.

Sr Mary Alice, another Sister of Notre Dame, reflected: ‘The poor loved Sr Dorothy because she was their loyal friend, she could be trusted, she believed in them and she was tireless in her struggle against injustice’.

‘The blood of martyrs is the seed of the Church’They will always remember that she died for them. Her actions spoke louder than her words. Anybody can read the Beatitudes. It takes an extraordinarily courageous, faithful person to read them facing the barrel of a loaded gun and within seconds of its firing.

We are all called to live the Beatitudes. In a special way, missionaries assume this responsibility in a land that is not their own, amongst a people who are not their own. In so doing, they find that they have become an integral part of a land and people that are no longer unfamiliar. Sr Dorothy made the Beatitudes her way of life even though they led to her martyrdom.

This article was written by Sr Janet Fearns FMDM.