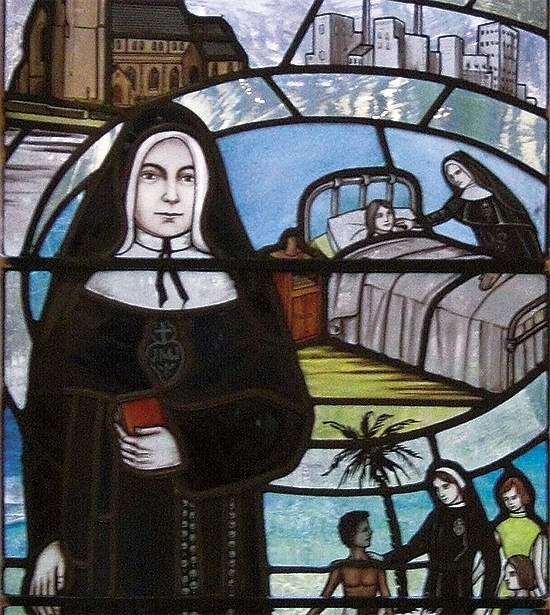 Elizabeth Prout was a woman with a unique spiritual vision. She was a spiritual revolutionary: a convert from Anglicanism (much to her family’s disapproval)  a pioneer of women’s rights, a social reformer but most of all a woman on fire with a passion for Christ. Dr Lucy Russell helps us understand the life and times of this remarkable woman.

Elizabeth Prout was born in Shrewsbury in 1820, and was baptised into the Church of England. Her father had been baptised a Catholic, but no longer practised, and her mother was a devout Anglican. As an only child, Elizabeth was a much cherished daughter and very close to her parents.

In Victorian England, women of the Prouts’ social class would have been brought up with marriage and motherhood as their only goals; professional careers were not open to women. But Elizabeth never married; instead she became a nun and a pioneer of women’s rights.

Elizabeth was brought up in the Anglican Church and attended Sunday school at the twelfth-century Benedictine Abbey made famous by Ellis Peters’s Cadfael Mysteries. The Catholic Church was not popular in England at this time, but things were changing with an influx of Irish immigrants and, at the other end of the social scale, with an intellectual movement led by Blessed John Henry Newman. Dominic Barberi (now Blessed Dominic) arrived in England in 1842. Thirty years earlier, he had heard the voice of God telling him that he was to bring stray sheep back to the fold. God would reveal to him a little later that his mission would be in England. We don’t know for certain, but it is thought very likely that – just like Newman – Elizabeth, impressed and convinced by Dominic’s spirituality, was received into the Catholic Church by him. Her conversion took place sometime between 1843 and 1846. It was not an easy decision for Elizabeth, who knew that her parents would not welcome the news. But Elizabeth recognised in Dominic a man of God, and said ‘yes’ to God’s call. Not only did her parents not welcome Elizabeth’s news, they disowned her and threw her out of their house. Elizabeth’s parents were perhaps trying ‘shock tactics’, hoping their daughter would come to her senses, but their actions were a catalyst for the inevitable.

Elizabeth turned away from her earthly family to follow her vocation, and became ‘a woman of totally unique spiritual visioElizabeth turned to the Passionist priests she knew for help, and in late spring or early summer of 1848 entered the convent of the Sisters of the Infant Jesus. Six months after that she was given the religious habit and the name Stanislaus after the Jesuit boy-saint who had braved the opposition of his parents to follow his vocation. But when early in 1849 Elizabeth was diagnosed with a tubercular knee, she returned home to her parents where she was welcomed with open arms. Anne Prout nursed Elizabeth back to health, convinced her prodigal daughter had learned a hard lesson and would come back to the Church of England and marry. But Elizabeth was determined to remain a Catholic and started going to Mass again as soon as she could walk. Her parents made clear their opposition, depriving her of breakfast when she came home from Mass, and then locking her in her room so she couldn’t get to Mass. Almost thirty years old, Elizabeth left home for the last time and went to Manchester where she began teaching the children of Irish immigrants and factory workers in the Catholic Parish of St Chad’s.

Elizabeth was shocked by the living and working conditions in 1850s Manchester. Despite the growing wealth due to trade and commerce, prosperity lay in the hands of very few of Manchester’s residents. Those who worked in the factories and produced the wealth lived, worked and died in desperate poverty and degradation.

Elizabeth’s spiritual life was rooted in prayer, the Mass and the Sacraments. She visited the sick and needy, and soon other like-minded women began to join her cause. She founded a religious order called the Sisters of the Holy Family, and took the name Mother Mary Joseph of Jesus. Candidates who wanted to join the religious order were welcomed from all social classes. Those who had little or no education were not ‘lay sisters’ but equal in rank to every other member of the group. Elizabeth made sure that the nuns supported themselves, as well as teaching the women of Manchester to do the same. Although some leading priests criticised her ‘revolutionary ideas’, the Vatican approved Elizabeth’s order of nuns in 1863 and put her in charge. But Elizabeth died the following year, aged 43. She had been worn out by her work for the poor and in keeping her order afloat financially.

Despite the growing wealth due to trade and commerce, prosperity lay in the hands of very few of Manchester’s residentsJust over ten years after her death, the Passionist Fathers allowed the name of Mother Mary’s Institute to be changed to ‘Sisters of the Cross and Passion’ and gave the Sisters permission to wear the Passionist Sign. In time the town of St Helens may well have three Saints, making the Church of St Anne and Blessed Dominic ‘the church of the three saints’. Blessed Dominic was beatified in 1963, and the Causes for Sainthood of Father Ignatius Spencer and Mother Mary Joseph were introduced in Rome in 1996.

During a pilgrimage to the Shrine in 1998, Father Nicholas Postlethwaite, Passionist Provincial said, ‘It is my view that Mother Mary Joseph built on Blessed Dominic’s Passionist vision, but developed it beyond anything he had ever envisaged. I think her own insights as a woman, her ability to analyse English society, and her daily experience of living directly with the poor, meant that she journeyed to new lands of Passionist vision, theology and spirit…’

Trusting our children and watching them struggle isn’t easy. The reaction of Elizabeth’s parents to her decision to say ‘yes’ to God is striking. We are commanded by God to honour our mother and father, but as parents we must also remember that God the Father has a role in the lives of our children too. We must trust him, and them. Elizabeth turned away from her earthly family to follow her vocation, and became, in the words of Father Postlethwaite, ‘a woman of totally unique spiritual vision’.