St Teresa Benedicta of the Cross 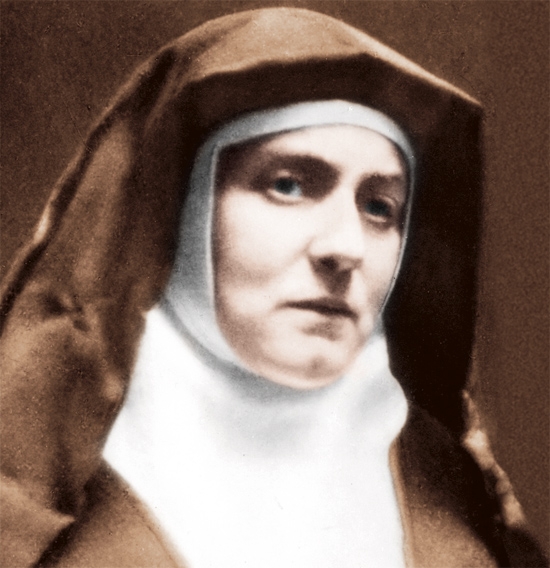 The words of Cardinal Newman’s motto, Heart speaks unto heart, can be placed alongside some words of Edith Stein, whose feast day we keep on 9th August: Secretum meum mihi – my secret is for me. Just as Cardinal Newman’s choice of motto speaks of the mutual communion of the heart of man with the  heart of God, so do Edith Stein’s words veil the mystery that is the working of God’s grace in her own soul at the moment of her conversion.

Like Cardinal Newman, Edith Stein dedicated herself to a search for the truth. She was born in Breslau in October 1891. Having ceased to live the Jewish faith in which she was born and brought up, Edith studied philosophy at the universities of Göttingen and Freiburg. Her ‘master‘ was Edmund Husserl, and the attraction was the school of realist phenomenology that focussed attention back on to the truth to be found in things. During this period of her life, Edith encountered religious phenomena as an area worthy of phenomenological study; she came to know academic colleagues who were religious believers; she encountered Christians, both Catholic and Protestant, and, subsequently, recognised the power of the Cross in their life. Edith moved gradually from atheism to the moment of being received into the Catholic Church. It was at the moment of that conversion, during an extended stay at the home of her closest friend, Hedwig Conrad-Martius, that Edith protected the intimacy of that experience by describing it to her host as being her own secret for herself.

‘God has created me to do him some definite service; he has committed some work to me which he has not committed to another. I have my mission – I never may know it in this life, but I shall be told it in the next’. These words of Cardinal Newman also have a parallel in the life of Edith Stein.

After becoming a Catholic – she was baptised on New Year’s Day 1922 – Edith Stein maintained an inward desire for the Carmelite life. Her overnight reading of the life of St Teresa of Avila was the immediate cause of her conversion. Anxious that such a step would be quite unbearable for her mother after the pain already caused by her conversion to Catholicism, Edith took up a position as a teacher at the Dominican school in Speyer. She taught there for eight years, working with trainee teachers at the school as well as teaching the pupils. Edith lived an almost religious life with the nuns. ‘With very few words – just by her personality and everything which emanated from her – she set me on my way, not only in my studies but in my whole moral life. With her you felt that you were in an atmosphere of everything noble, pure and sublime which simply carried you up with it’.

With her you felt that you were in an atmosphere of everything noble, pure and sublimeEdith Stein also gained a reputation as a speaker, particularly on questions relating to women and education. She translated a volume of the letters and diary of Cardinal Newman, and produced a translation that was in effect also a commentary on Thomas Aquinas’ de Veritate. Eventually, Edith left her post at Speyer to give herself more time for her own academic work, later taking  a lecturing post in Münster. It was as the Nazis came to power in 1933 that Edith’s Jewish heritage became the reason for her not being able to continue with her work in Münster. The ‘mission’ of these eleven years might not have been her first choice – her spiritual directors had recognized what she had to offer to the Church as a person ‘in the world’ and had discouraged her expressed wishes to enter Carmel – but Edith had lived them faithfully.

The comparison between Edith Stein’s eleven years of public life as a Catholic and the time that Cardinal Newman spent at Littlemore before his reception into the Catholic Church is not an exact comparison; but both times do share the sense of being times of faithfully lived preparation fulfilled in their eventual outcomes. Edith’s vocation, even during her time ‘in the world’, was one of preferring the Carmelite vocation. When it was no longer possible for her to continue in public life, she saw it as a call to enter Carmel. Her spiritual director described Edith as running towards Carmel like a child who throws herself into the arms of her mother.

As she entered religious life, Edith Stein received the name Sr Teresa Benedicta a Cruce – literally, ‘Sr Teresa, blessed by the Cross’. In the light of events in Germany, she believed that the Cross was being in some way placed upon the Jewish people and that those who recognised this had a responsibility to take on themselves and to carry that Cross. She prayed that God would make clear to her how she could bear that Cross for her people, though as she entered Carmel it was not apparent how that vocation would be fulfilled.

Hedwig Conrad-Martius described a meeting with Edith in the parlour at Cologne Carmel after she had completed one year of the noviciate: ‘…the spirit of childhood, the spontaneous joy and the sense of being in safety that she had now acquired was, if I can speak thus, an enchantment. The marvellous double meaning of the word grace – free gift and charm – were here united.’

After the Kristallnacht attacks that took place in November 1938, it was decided that it would be safer for her and for the community in Cologne if Edith Stein were to transfer to the Carmel at Echt in Holland. She was driven across the border on New Year’s Eve 1938/39. Hedwig Conrad-Martius observes how the photograph taken of Edith just before she left for Holland shows her previously innocent and joyful character completely disfigured by suffering.

After the occupation by the Germans, Holland did not prove safe for Edith either. In August 1942, a pastoral letter was read in all the Catholic churches of Holland condemning the deportation of Jews from Holland. In retaliation, the German authorities arrested all Catholics of Jewish descent, among them Edith Stein and her sister Rosa. Edith’s arrest and subsequent martyrdom have both a Jewish and a Catholic character. Edith and her sister died at Auschwitz-Birkenau on 9th August 1942.

‘I always have to think of Queen Esther, who was taken away from her people for the express purpose of standing before the king for her people. I am the very poor, weak and small Esther, but the king who selected me is infinitely great and merciful.’

She believed that the Cross was being in some way placed upon the Jewish peopleAccording to Hedwig Conrad-Martius, the essence of Edith Stein can be found in the beauty of a three-fold obedience to the real: that of the saint (the interior receptivity of the soul to the life of the Holy Spirit), that which she lived in a spirit of child-likeness (openness of personality), and that which she lived as a philosopher dedicated to the truth of things as they presented themselves to her (phenomenology). That is, obedience to the truth of things, the truth of persons and to the truth of God. This is the meaning of her life for us today.