Melinda Gates – Giving it All Away 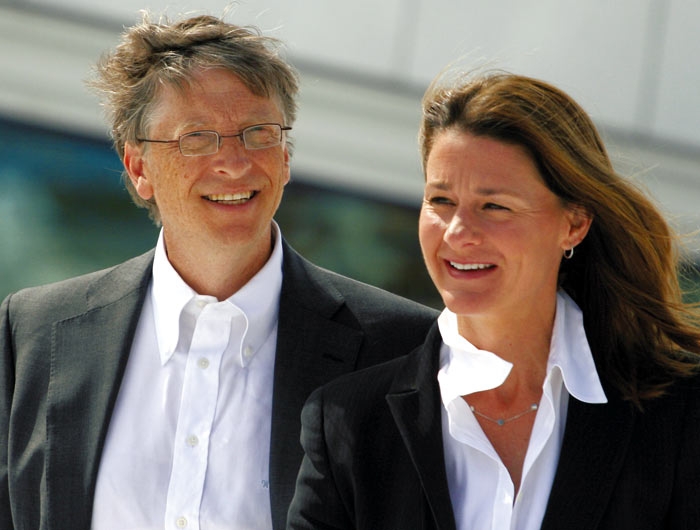 Melinda Gates, wife of Microsoft founder Bill,  wants her enormous wealth to benefit the poorest of the poor in the developing world.  Her giving, she tells Joanna Moorhead, has its roots in her Catholic upbringing, and in the Church’s social teaching.

It’s 9am on a wet weekday, but despite the early hour Melinda Gates is looking impeccable in a grey trouser suit and perfectly-applied make-up. She looks a million dollars – which isn’t surprising, since she’s the wife of Microsoft founder Bill Gates, and as such is one of the wealthiest women on the planet.

But if you thought someone in her shoes would spend her life ricocheting between the hairdresser, the gym and the spa, think again. Melinda, who’s 47, is just back from a trip to Senegal and Niger where she spent her time in remote villages talking to local people about what they need to improve their lives. For the last 12 years, much of Melinda’s life has been devoted to giving away her husband’s wealth to the developing world – and she believes in consulting on the ground before she makes her decisions.

‘from those to whom much is given, much is expected’Melinda French, as she was born, was raised in Dallas, Texas, the second of four children in a firmly Catholic family. She was a pupil at St Monica’s Catholic School, and then went on to the city’s Ursuline Academy and often speaks about the influence the nuns had on her life. The school motto was ‘Serviam’ ‘I will serve’ and it’s clear she took that message to heart early on in her life – although back in her schooldays, no-one could have guessed quite how far-reaching her ‘serving’ would turn out to be.

After leaving the Ursulines she studied at Duke University in North Carolina, before joining Microsoft in 1987. There she met Bill at a company dinner in New York and began dating him after they met by chance again a few months later in a car park; they were married in 1994, a few months before the death of Bill’s mother Mary.

After her marriage, Melinda left Microsoft to raise her children – the couple have two daughters, Jennifer and Pheobe, and a son, Rory – and as they grew older, she began to increasingly turn her attention to the foundation that she and her husband established in 1994.

She attributes much of her drive as perhaps the world’s leading Catholic philanthropist to her late mother-in-law’s message that ‘from those to whom much is given, much is expected’ – and also to the gospel message and the teaching of the Catholic Church. ‘We have beautiful teaching on social justice, and the Church does incredible work through its relief services,’ she says. ‘My roots come from the Church’s social teaching – it’s the basis of what I do.’

Of course she has her critics: there are people who say it’s unfair for one or two people to have the power to make decisions that really can, and really do, have life-and-death outcomes. But given that this is a woman who’s been up since 4am trying to get better healthcare for the people of Africa, when she might have been sunning herself on a beach and minding her own business, this seems a little churlish.

Since the inception of the Gates foundation she’s always made it clear that the organisation would not fund abortion. She doesn’t feel the same way about contraception. And now, because – she says – so many of the women she’s met in Africa and Asia have said it’s a major priority for them, she’s decided to speak out in favour of birth control. ‘I wrestled with it for a long time, of course I did,’ she explains. ‘As a Catholic you say I believe in this faith, there are amazing things about this faith, amazing moral teachings that I believe in: but I also have to think about how we keep women alive. I believe in not letting women die and in not letting babies die.’

‘My roots come from the Church’s social teaching – it’s the basis of what I do.’If women could space their babies apart more efficiently, says Melinda, those in the developing world would be able to wait until they felt able to care for, and feed, a new baby. At the moment, she says, women too often find themselves pregnant before they feel ready – and the pressure on their bodies, and on their families – is often too much. ‘It’s shocking how many women in Africa will tell you they know someone who died, or whose baby died, in childbirth,’ she says.

Catholic Church-approved methods of birth control are, says Melinda, extremely important in helping couples plan their families. ‘The Catholic Church believes in a form of birth control and that is natural birth spacing and that is an ok method to teach women, women do use that in the developing world. But there are also modern tools and I feel like there’s space for everybody to do their work.’

Of course not everyone within the Church is with her on that – she has been the target of critics who accuse her of misguided thinking in linking contraception to deaths in childbirth: the focus, they say, should be on improving obstetric services, not in helping women to stop getting pregnant in the first place.

She and Bill are also dedicated to giving their wealth away – almost all of it, and with a foundation worth around $34 billion, that’s a lot of money. But Melinda is undaunted: she says many Catholics support her campaigning and the direction in which her funds are being used.

And, certainly today as she heads out into London to attend a conference of development partners from around the world, she doesn’t look like someone who is having second thoughts or who is prepared to slow down. Since she upped a gear with the foundation’s work, she and Bill have shared the travelling so that one of them is usually at home in Seattle with their children.

She and Bill are also dedicated to giving their wealth away – almost all of it, and with a foundation worth around $34 billion, that’s a lot of money. The idea, they’ve said, is to ensure that it is put to good use within their lifetimes, or certainly that it’s all been used up within a few years of their deaths. This is clearly a couple who took the words of another philanthropist, Andrew Carnegie, to heart: he said that ‘to die rich is to die disgraced’. Nor will their children inherit large legacies: they’re said to be leaving them enough to allow them to do what they want with their lives, but not so much money that they’ll be able to choose to do nothing.

‘to die rich is to die disgraced’What comes across more than anything when you meet Melinda is that she’s still the Ursuline high-schooler, still living out the nuns’ motto. It’s certainly controversial in some quarters, but few could argue that her heart, when it comes to her wealth, is very firmly in the right place. Her central philosophy is that ‘All lives’, have an equal value.’ It isn’t good enough to think that mothers in Africa somehow don’t love their children as much as mothers in the West: they love them just as much, and they deserve the same chance of being able to raise them to adulthood. And that, says Melinda, is what she is dedicating her life to working towards.