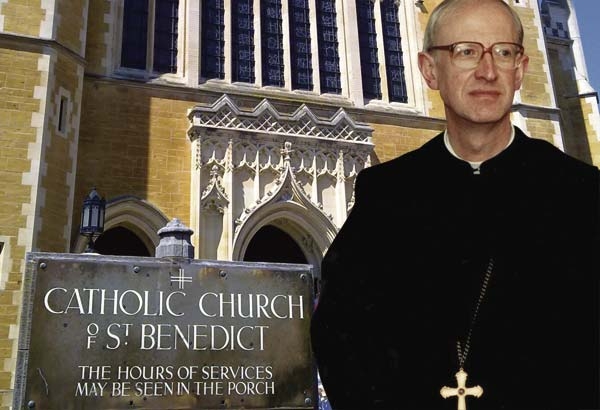 In this Year of Faith declared by Pope Benedict we are encouraged to grow and mature in our faith, however the church recognizes that there are obstacles to faith and these include scandal and bad witness (Catechism of the Catholic Church 29).  The child abuse tragedy which has engulfed the Church  has been a cause of great pain, suffering and scandal which has undermined and challenged the faith of many.

Eileen Fairweather, the Catholic award-winning investigative journalist, recently joined forces with Alive Publishing to raise awareness about the case of Laurence Soper, a former Benedictine Abbot currently on the run from the police. Eileen explains the story behind the search for Laurence Soper.

Laurence Soper, 68, was abbot of Ealing Abbey and, until last year, treasurer of the International Benedictine Congregation. He skipped bail 18 months ago before police could charge him with alleged abuse at the Abbey’s attached St Benedict’s School, which has been at the centre of a shocking abuse inquiry resulting in arrests and convictions.

Alive Publishing through Faith Today, Bible Alive and its other publications will be alerting Benedictine monasteries world-wide by circulating this feature and Soper’s photograph, and urging its readers to pray for him to turn himself in, and for anyone with knowledge about his whereabouts to alert the police.

I have exposed many paedophile networks targeting Britain’s schools, charities, children’s homes and churches. So many children suffered because people protected adults, not them.

No one sensible would choose my grim specialism. But, years ago, a small girl whom my own child knew was abducted and left for dead by a man allegedly involved with such rings. I was horrified and felt duty bound to investigate. One inquiry led inexorably to another. This work is exhausting, scary and heart-rending. But – while others fled the church over the abuse issue – it brought me back to it, after years of being lapsed.  I wrote about my journey back to faith first in the Mail on Sunday and then for Bible Alive.

Working in this area is challenging in so many ways, emotionally, psychologically and spiritually. It is always the victims of this terrible crime that one’s heart goes out to. The stories of the St Benedict’s abuse survivors are poignantly similar to those of poorer  victims from the other side of the tracks. These Old Priorians do not recall privilege but pain, including breakdowns, being sectioned, becoming anti-social and violent. One recalled a classmate becoming a prostitute, another committing suicide.

Families too were fractured by the abuse: some parents could not believe that any priest would behave so, others near destroyed by their inability to protect their beloved child.

A former pupil told me he was haunted by other children’s cries. ‘Some of us used to gather outside the studies of Fr Pearce (now serving a prison sentence) making noise to signal our presence, when classmates he had targeted for ‘extra tuition’ were summoned there. Back then, of course, we had only the most rudimentary vocabulary for what we knew or suspected was going on.’

Soper today has put himself outside both the law and the church through disappearing. Police have obtained a European Arrest Warrant, and Ealing Abbey has confirmed that: ‘Laurence Soper has been dismissed from the monastery. He is no longer a monk or a member of the community.  By virtue of this, he is canonically suspended from priestly ministry.’

The Vatican ordered an inquiry following the Lord Carlile’s independent report on the scandal, this listed five allegations on five occasions against Soper, the first Apostolic Visitation in Britain in living memory. Its findings will not be made public. But Soper was also an ordained priest and may now be laicised. The abbey has confirmed: ‘His case has been passed to the Congregation for Religious in Rome and the matter is now in their hands.’

So where is Soper now? Police suspect that he may still be in Italy. But that is a guess. Publicising the facts can only help.

Andrew Charles Kingsdon Soper was born in Hendon, Middlesex, on September 17 1943, to Alan Kingsdon Soper and Anne, maiden name Morris. His Penzance-born father married his mother in Cardiff in 1936. He was a distant cousin of the socialist and Methodist peer Lord Donald Soper, but apparently never met him. He was his parents’ only child.

He is around 5.7, pale, with ‘grey or blue eyes’, and slim built. He needs spectacles or contact lenses, and is grey-haired. A former pupil recalls a distinctive  ‘high-pitched voice’, another a ‘nasal’ voice, and ‘slightly posh received pronunciation accent’. He attended St Benedict’s as a boy, and many suspect that he is in a remote, contemplative monastery abroad, sheltered by monks who are misguided or do not know his real background.

Laurence Soper
around 5.7, fair complexion ,
with ‘grey or blue eyes’,
and slim built.
He needs spectacles or
contact lenses,
and is grey-haired.
A former pupil recalls a distinctive  ‘high-pitched voice’, another a ‘nasal’ voice, and ‘slightly posh received pronunciation accent’
his forenames are Andrew Charles Kingsdon and that is probably what is on his passport.Sant’ Anselmo’s (the Benedictine HQ in Italy) abbot, Father Lorenzo Elias, has only been there 18 months. He told the Mail on Sunday’s reporter in Italy, Nick Pisa, that Soper seemed kindly, calm and a good treasurer, but kept to himself, did not have close friends or talk about his background. Soper was questioned a second time by British police in London in January 2011. Extraordinarily, they let him retain his passport, did not take a photo, and asked him through his solicitor to return in March. Instead, after leaving St Anselmo on March 4,  he vanished.

So how is Soper surviving now? A Benedictine contact told the Mail on Sunday that Soper slipped back into the Vatican City last summer, when most staff leave for the country to escape the stifling heat, and emptied his bank account.

Soper is thought to have inherited from his parents,  who died in care homes on the English south coast ‘four or five years ago’. As a Benedictine, Soper was obliged to hand personal wealth to his order.  But he was at risk, and his escape appears well planned.

Like Sant’ Anselmo, Ealing Abbey say that Soper has never been in touch since and switched off his phone: ‘He was trusted by the police in England to return as and when required. He has betrayed that trust. If anyone has information as to his whereabouts, we urge them to contact the police.’ A spokesman added that it ‘wholeheartedly’ supports the renewed appeal to find him. ‘People here are so angry with him. The school and abbey cannot move on while he evades justice.’

Could someone be sheltering Soper from mistaken charity? I have interviewed several paedophiles in prison. They are deeply damaged and damaging people. But cynically manipulating people is also crucial to obtaining victims and allaying the suspicions of other adults.

Mike Conway, Managing Editor of Alive Publishing, says: ‘Soper was the leader of a monastic community for many years.  He is familiar with the Scriptures and the Gospels. He will know that Jesus taught that it would be better for a millstone to be tied around the neck and to be hurled into the sea than to hurt or sin against a child.’

He accepts that Soper may be innocent and, if he is, he should hand himself in to clear his name; if he is  not, then he must face justice. ‘We appeal to anybody with knowledge about his whereabouts to follow their conscience and contact the police.’

The Metropolitan Police are appealing for information in tracing a former Roman Catholic monk who failed to return on police bail.

In June 2010, a man now in his 40s made an allegation of sexual assault relating to his time at St Benedict’s School, Ealing.

Officers from the MPS Child Abuse Investigation Team investigated and Laurence Soper, 68, was arrested in September 2010 on suspicion of sexual assault.

He was subsequently bailed to return to a west London police station in March 2011 pending further enquiries but he failed to appear.

Officers have made extensive enquiries to trace him without success and a European Arrest Warrant for his arrest has been obtained.

It is believed he may be in Italy and officers are appealing for anyone who may know of his whereabouts to please make contact on:

if you wish to remain anonymous call Crimestoppers on:

« Melinda Gates – Giving it All Away
Giving – An Act of Faith »