Taking the Passion to the People 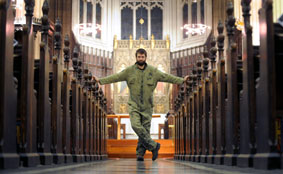 They were first performed in the middle ages, when public shows were the only way of putting out a mass message. But in the tech-savvy 21st century, passion plays are back. What’s it all about? Faith Today reports.

The place is Scotland; the moment, the eve of a potentially ground-shifting referendum. Dominating the media is one man whose message is strong and loud and powerful. But no, it’s not Alex Salmond, it’s Jesus Christ. And as the narrative enfolds it’s clear that Christ is going to pay a very high price for daring to anger the Scottish powers-that-be.

That’s the plot of this year’s Edinburgh passion play, due to be performed in the centre of the city on Easter Saturday. More than 30 actors and 100 support staff are involved, most of them amateurs – and the organisers hope that the show could be seen by many thousands in the midst of a busy holiday weekend. ‘It’s a story for all time, as relevant today as it was 2,000 years ago,’ says the play’s director Suzanne Lofthus. ‘We want to ask the question: if Jesus was around today, what would he look like? What would be say and do, and how would people respond to him?’

The Edinburgh passion play is probably the edgiest of the 20 or so major plays planned for easter weekend this year across the UK. Some of them, like the one scheduled to take place in London’s Trafalgar Square, will be traditional renderings of the gospel story; others, like Edinburgh, will take a much more contemporary approach. But what’s most interesting is that, centuries on from the inception of the passion play in the middle ages, and in an age when most of us are glued to our high-tech devices, there’s a revival of one of the most basic possible forms of storytelling – the dress-up and act-out play, performed in town and village and city centres, with non-professionals taking the leading roles.

So what’s it all about? Peter Blackman, who’s a Catholic, is the director of the South Woodham Ferrers passion play. The Essex new town held its first passion play in 2009, and hopes to repeat it on a five-yearly cycle. ‘We’re using the play written for the Hornchurch production, but we’re tending towards a more contemporary telling of the story,’ says Peter. ‘Last time, Jesus arrived on a Harley Davidson motorbike – this year we’ve got an equally grabbing entrance, but we’re not going to say what it is.’

The resurgence of interest in passion plays, he says, is all about taking the gospel story to where people are. ‘If they’re not in the churches, but they are on the high street and in the shops, we’ve got to take the message to there, to where the people are,’ he says. ‘Our play has a cast of 50 and it takes place in the very centre of the town – the garden of Gethsemane scene is played out on the steps of the town’s Barclays Bank. What we want to do is stop people in their tracks as they go about their shopping on a bank holiday when they can’t even remember what the bank holiday is about, and say to them: this is the story. This is what it’s all down to.’

Like most passion plays, the South Woodham Ferrers production is truly ecumenical – all the more so in its case, since the main church, Holy Trinity, is the centre of worship for the town’s Methodists and Anglicans as well as its Catholics. This year, the Anglican bishops of Bradwell, John Wraw, is playing the blind man healed by Christ; one of his lines, says Peter, is ‘I’m not a holy man’. ‘It’s all about getting people to think about Christianity,’ he says. ‘The feedback last time was fantastic; we had people in tears, people saying they were going back to their faith, people who had never really encountered the message of Christ before who were clearly overwhelmed by it.’

Back in Edinburgh, director Suzanne Lofthus says she’s very excited about this year’s play. Like many of those involved in directing and producing the shows, she has many years of experience. ‘For many years I had been directing a traditional version of the play in Glasgow, and I felt the young people weren’t getting the relevance. They seemed to think it was a nice story, but that it didn’t have much to do with their lives. But I wanted to show that Jesus is as relevant to this generation as to any other generation, and I hope what we’re planning for Edinburgh this year will truly do that.’

What the play doesn’t do, she says, is give its audience lots of answers. ‘What I hope they’ll do is go away and think about the questions it raises for themselves. I hope they’ll think, I’ve never thought of Jesus in that way before – and then they’ll think about what it means. ‘What’s very clear, she says, is that the Christ in her play isn’t party political; there’s no attempt to persuade anyone how they should vote in the upcoming referendum, and in one aside reminiscent of spin doctor Alistair Campbell’s famous comment that Tony Blair ‘doesn’t do God’, the Jesus in the Edinburgh play says he ‘doesn’t do politics’. ‘People will read all sorts into the script, but at the end of the day the important thing is they think about who Jesus was, and why he did what he did.’