The Camelite Martyrs with a Message for Our Time 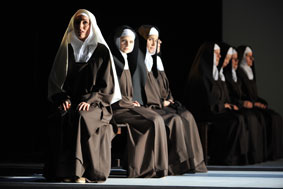 This month sees the London opening of an opera that tells the story of a community of nuns who died during the French revolution. Joanna Moorhead travelled to Compiegne and Paris to learn more about how they lived, and why they died.

I am no opera buff, but the music from the final scene of a piece of work by Francis Poulenc has just moved me to tears. It’s a haunting, sorrowful piece of orchestral music, heavy with impending tragedy: its central feature is a group of beautiful female voices singing the Salve Regina. But what’s odd about it, if you don’t know the story it tells, is the fact that the music is accompanied by a series of heavy thuds; and the more thuds you hear, the fewer the voices. Until, at last, they stop altogether.

The opera was written in 1956. It’s called the Dialogues des Carmelites, and it depicts the tale of a community of 16 Carmelite nuns who were guillotined during the French revolution in 1794. The nuns, aged between 29 and 78, sang their hymns on the scaffold as, one by one, they were strapped to the guillotine and beheaded. It is one of those stories that, even at a distance of 200-plus years, still has the power to shock.

Poulenc’s operatic take on their story was acclaimed from its debut performance in Milan in 1957, and is widely regarded as one of the greatest works of its kind of the 20th century. But it has never been performed at London’s Royal Opera House. Until now: because later this month, it opens in an award-winning production directed by Robert Carsen and conducted by Simon Rattle.

The opera focuses on a fictional character called Blanche de la Force, who joins the Carmelite community at their convent in Compiegne in the early weeks of the French revolution. When the convent is closed, she flees; the other nuns choose to be martyred rather than to disband. But on the day of the executions Blanche is among the crowd; and at the last minute, she steps forward to accept the same fate as her sisters.

In the true story, the nuns were evicted from their convent in September 1792, and from that point on they lived in the town in four groups in ordinary houses, dressed like ordinary women. They met for prayer and kept to their Carmelite vows as much as they could. But, though they kept as low a profile as possible, the local revolutionaries became aware that they were living against the spirit of the new code, and they were taken by cart to Paris to be tried for sedition.

The nuns were given no legal representation, and were sentenced to death; and on 17 July they were led through the streets of Paris in the traditional tumbrel. The youngest, Sister Constance, was first to die; Mother Henriette of Jesus, the prioress, was the last.

In May 1906 the 16 Carmelites were beatified by Pope Pius X; St Therese of Lisieux was one of the many Carmelites who always honoured their memory and who kept their story alive. So too did the Benedictines of Stanbrook Abbey in England, since a group of them had been imprisoned in Paris with the Carmelites; they were released after the Reign of Terror, and took clothes left behind by the Carmelites back to England with them when they returned.
On a recent visit to France I went in search of the Carmelites: first to Compiegne, a spacious and charming medium-sized town about an hour north of Paris by train. The convent stood on the banks of the River Oise, though it has gone now: but look hard and there are a few vestiges of their presence, such as the ‘Rue de Carmel’ and a leaflet about their story at the town’s tourist information centre.

The cemetery is cared for by a community of Sisters of the Sacred Heart: according to the guidebook, around 1300 victims of the revolution are buried there (at the height of the guillotining, as many as 55 people died there each day). There is a plaque to the 16 Carmelites, listing them by name and commemorating the date of their beatification, 27 May 1906.

The performance of the Dialogues des Carmelites at the Royal Opera House will doubtless focus attention on their story again, and will raise age-old questions about martyrdom and sacrifice. Did the nuns have to die, or did they choose to die? Should they have dispersed quietly and continued to live as faithful individuals, or was it right to make a stand against the diktats of the revolutionaries and to stand up for religious freedom?

There is real evidence that the killing of 16 nuns (and on the day they died, by chance, the women were wearing their religious habits – their secular clothes were being washed, so they had no other clothes to put on) caused many in Paris to rethink the horror of the violence and to ask what it was really all about. According to contemporary accounts of their execution, the crowds – who were normally in raucous, party-like mood for these events – watched in complete silence as the sisters died, which is why the sound of their singing made such an impression. Ten days later, the Reign of Terror itself came to an end with the death of Robespierre on the same spot as the nuns: some historians believe their executions hastened his end.

And, of course, the place of sacrifice and its importance is as relevant to the world in 2014 as it was in 1794. The nuns died in a particularly appalling way, in especially bloody times: but across the planet today individuals, both religious and non-religious, are still making the ultimate sacrifice for causes and faith and for God, as the Carmelites did. Their voices singing the Salve Regina echo down through the centuries not only as a story from history, but as a story for our times, as those fortunate enough to hear Poulenc’s opera will discover.