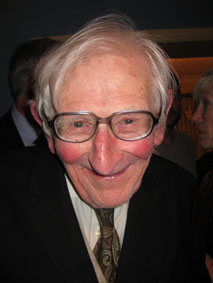 He’s 103, but that doesn’t stop Archie Campbell Murdock overseeing the music at Mass at his parish church. Faith Today went to meet him.

Go to Mass at St Osmund’s in Salisbury, and when it comes to the hymns you could be in for a treat. Not only is the organist one of the most talented musicians in town; but also, at 103, he’s surely one of the oldest parishioners active at a church anywhere in Britain.

Archie Campbell Murdock was born in 1911, the year before the Titanic set sail; and he was three years old when the first world war broke out. But when I go to visit him at his sheltered accommodation, the Abbeyfield Society’s MacGregor House in the centre of the town, he comes downstairs to let me in – and then leads the way, vigorously, back up to his first floor room. It’s filled with pictures of his family and places he’s lived during his long life – and with pictures of the Sacred Heart, Padre Pio, Mother Teresa and Pope John Paul II. Faith, it’s very clear, is at the centre of Archie’s life. He’s never lost sight, he says, of the miracle of God’s presence – it’s guided him through his long life, and it guides him still.

‘God sustains me every moment of my day; when you know that, you sometimes wonder how you could ever think of anything else,’ he says. ‘I mean, I do think of other things, because we all do: but really, it’s absolutely amazing; it’s central to everything.’ Every day, Archie gets the bus into town to attend morning Mass at St Osmund’s; and that, he says, is the backbone to his day. ‘It’s central to my life that I am able to drink the blood of the creator of the universe, every day of my life,’ he says.

Archie is a beloved figure at St Osmund’s. ‘People are always telling me it’s such an achievement to be 103,’ he says. ‘But I say I’ve not done anything at all; all I did was simply carry on.’

Archie says he’s thrilled to still be involved with the music at St Osmond’s, having played the organ there for many years. ‘It’s so lovely to have this long connection with the church, and it’s wonderful that I’m still able to play sometimes,’ he says. ‘I sing regularly in the church choir, too.’

Music has always been a central part of Archie’s life. Born in Casablanca in Morocco to Anglican parents, his father was killed during the first world war and his mother sent him to school at Winchester College. He went on to study history at Trinity College, Oxford, and while he was there he met and married his wife Sheila, a widow who had a little girl called Bridget. He then studied at the Royal College of Music in London, becoming a professional singer; and during world war two he became a member of the auxiliary fire service.

It was one day during the war that Archie went to Mass at Westminster Cathedral with a Catholic friend – and realised, straightaway, that he wanted to become a Catholic. ‘I’d never been to a Catholic church before and I remember loving the whole thing; I particularly remember the entrance of the altar boys carrying the cross.’

He started going to Mass regularly, and the idea of becoming a Catholic grew – but he had one big worry. ‘How was I going to tell Sheila? And what on earth would she make of it?’ Eventually, he summed up the courage. ‘And when I eventually got round to telling her, guess what she said? She said she’d been thinking exactly the same thing, and she would very much like to do it as well.’

A few months later, the couple were received into the Church – a wonderful moment, says Archie, that felt just like coming home.

After the war Archie became head of More House School in Farnham, Surrey, which specialises in educating disadvantaged children. He retired in 1971 and lived for some years in Malta, before moving to Salisbury with Sheila in 1985; she died there in 2003, having herself reached her 100th birthday; the couple had been married for 71 years.

Today, he says, he simply enjoys each day, convinced that God is never far away. ‘I have no idea why I’ve lived so long, but I do know God must have wanted it for some reason, and that’s enough for me,’ he says. ‘The older I get the less I feel I know – and in a sense, the less I want to know. But I think I do know what’s important, and it’s God and serving Him.’

His watchword for life, he says, is ‘301’ – the 301st verse of the Cathechism of the Catholic Church. It reads: ‘With creation, God does not abandon his creatures to themselves. He not only gives them being and existence, but also, and at every moment, upholds and sustains them in being, enables them to act and brings them to their final end.’

That, says Archie, is the central theme of his life. ‘It means God is always with me, always near me – I say to myself, why should I worry? Why would I worry? When I know that God will not abandon me.’

One of the biggest joys in his life, he says, is playing the organ and singing the hymns that have sustained him throughout his long life. ‘Singing those old hymns gives me enormous pleasure – it seems to connect my past to my present, and the sentiments about God and faith are as important now as they ever were,’ he says. His favourites include ‘For All the Saints’, which he remembers singing when he was at school. ‘Many of the hymns I know and love are Anglican hymns.’

He says he feels very privileged to have known the Catholic Church through such interesting times. ‘The Church I converted into was very different from the Church I’m a member of today,’ he says. ‘And I think in most ways the changes have been for the better. Vatican II was a very good idea, although I do think some people tried to use it in ways they wanted to use it, rather than trying to see its central themes.

‘Then there are people who still want only to go to Mass in Latin, and I’ve got friends who take that view. But I think if the Church allows Mass to be said in English, that’s good enough for me. You can go too far in trying to stay in the past, and however old you get it’s important to be aware of what’s happening in the world of the moment, to try to understand it and to be open to the good things in it.’