Philomena My Faith is Still a Comfort to Me 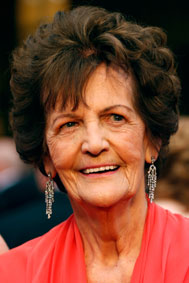 Philomena Lee was a teenager when she became a ‘fallen woman’ in the eyes of 1950’s Ireland, and gave birth in a convent-run mother and baby home. She suffered enormously as a result; but the film made about her story shines a spotlight on her extraordinary capacity to forgive. Faith Today went to meet her.

It’s 57 years since Philomena Lee last saw her son Anthony, but when you ask her what he was like, her eyes light up with the memory. ‘He was a real sweetheart,’ she says. ‘He was clever and cute and affectionate. He gave me wonderful cuddles, and he loved singing. I always used to sing Irish ditties to him.’

What Philomena, 81, hopes more than anything and what she believes is that her love for Anthony remained in his heart, even though they were parted forever when he was three years old. Philomena, who was born and raised in Limerick, was rejected by her family after she found herself pregnant by a young man she met at a funfair when she was 19. She had her baby at a convent in Roscrea, after which she was forced to give him up for adoption. Anthony went to live with a new family in America; Philomena became a nurse, married and had another son and a daughter. But she never forgot Anthony, and her search to find him became the basis for the movie Philomena, starring Judi Dench and Steve Coogan.

Today Philomena is at her daughter Jane’s house north of London, having her hair and make up done for a round of interviews to mark the film’s release on DVD. She’s getting used to star treatment, she says: in March she went to Los Angeles for the Oscars, after Philomena was nominated in four categories including best picture. She still can’t believe it’s all happening, she says. ‘All I’ve wanted to do, my whole life, was find Anthony. But for so long it was just a secret hope inside me. It was years before I mentioned it to anyone, and even then I never in a million years thought it would be something anyone else would be interested in, never mind that it would lead to a book or a film.’

The film tells the story of Philomena’s friendship with an ex-BBC journalist called Martin Sixsmith who helped her piece together the story of her son’s life; his book, on which the film is based, details what happened to Anthony after he left the convent in Roscrea that day in 1955, with Philomena sobbing as the car pulled out of the driveway (the nuns who ran the home didn’t give them chance to say goodbye to one another). He was raised by a Catholic family in St Louis, qualified as a lawyer, and worked as an attorney in the George W Bush presidential administration. But Anthony who was re-named Michael by his new family was also gay, and he contracted Aids and died at the age of 43, before Philomena was able to trace what had happened to him. Tragically, he had been searching for Philomena just as she had been searching for him: and while Philomena says she can undersand the nuns’ views on illegitimacy in the 1950s, she finds it hard to accept that there was any reason to ‘protect’ her or her son by the 1980s, when disclosure about their identities would have meant they could have been reunited.

And yet, despite the fact that she suffered at the hands of various Catholic institutions, Philomena says she still has her faith. ‘I did lose it for a while, in the darkest times,’ she says. ‘But today it’s a comfort to me and I like to pray for Anthony.’

Recently she went to Rome with the film’s star and screenplay writer Steve Coogan who also has Irish Catholic roots and the two of them met Pope Francis. ‘He was very kind,’ says Philomena. ‘Afterwards we watched the film inside the Vatican with some cardinals and bishops. I was worried they would find it anti-Catholic, but when we asked them what they thought they said not at all: what it’s really about is forgiveness.’

Philomena says she has forgiven the nuns whose outdated and often downright cruel attitude towards ‘fallen women’ made her life hell. ‘We were so judged, so ostracised,’ she remembers. ‘Judged by our families, who disowned us, and judged by the nuns, who never missed an opportunity to remind us of our guilt.’ Like all her fellow unmarried mothers in the home, Philomena worked long hours in the convent laundry without pay. The only thing that made it bearable, she says, was the hour a day she was allowed to spend with Anthony.

Although the film gives the impression that all the detective work directed at finding what had happened to Anthony was done by Martin Sixsmith, the reality was that it was Philomena’s daughter Jane, 52, who did the bulk of the initial spadework. Philomena kept Anthony’s existence a secret from her other children for many years, but in 2003 she finally decided to open up about it. ‘I was really fascinated by this idea that, somewhere out there, I had a half-brother,’ remembers Jane. ‘I started researching what had happened to the children born in mother and baby homes in Ireland around that time, and I started writing letters to the nuns who we knew would have the information about what had happened to Anthony.’

Within a few months of embarking on the search for Anthony, Jane got a letter from a nun at the convent in Roscrea where Philomena had given birth to her son, saying she ‘had information’ to share. ‘Mum and I were incredibly excited when we got that letter; we thought we were going to find out how to get in touch with him,’ she says. But the reality was a lot harder. ‘When we got through, the nun said she was sorry, but that Anthony was dead. For my mum, it was like losing him all over again.’

What was hardest to cope with was that Anthony (now Michael) had visited Roscrea to ask the nuns for information about his mother; but they had failed to put him in touch. ‘I understand the need to protect people, but really what is protection about when one person is searching for the other, and they’re searching as well?’ she says. Philomena and Jane are now calling on the Catholic Church in Ireland to open its records properly so that any other mothers or children who want answers to questions about who they are and who their relatives are, will be able to find out.

When Jane asked a friend to call on Martin Sixsmith for advice, the journalist who had been the BBC’s Washington correspondent agreed to research what had happened to Michael in the US. It turned out that Sixsmith actually remembered Michael (Hess, as he became) from his time at the White House; and he pieced together Michael’s story. Most poignant of all was the finding that he had requested that his ashes should be interred in the graveyard of the convent at Roscrea, so that his mother would hopefully eventually find him there.

And, of course, she eventually did. Today, Philomena is philosophical. ‘I’ve put it to rest now,’ she says. ‘It was a sad way for the story to end, a sad place to find him. And it still makes me weep to think that he never knew that I didn’t abandon him, but that I was looking for him and that I never gave up hope of seeing him again.

‘But for now, I just hope that other mothers and other children get the help they need if they decide to go looking. Because it’s a search they’re entitled to make, and it’s wrong that people sometimes stand in the way of that search. I hope things will change.’