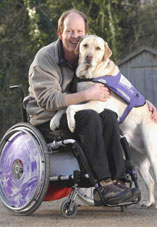 If we want to know how to follow the teachings of Jesus, we couldn’t do much better than watching the behaviour of some of our dogs, says Hazel Sillver

Whenever my labrador meets people, whether he knows them or not, he showers them with affection. As soon as he catches sight of a human, his tail begins to wag and he greets them with a big grin because he is genuinely bursting with joy at seeing them. He is a pure love machine and for that reason he is my hero and my teacher.

Of course some people dislike his unabashed affection, but most adore it, their sullen serious faces softening into delight. Children are most honest at craving his affection, running up to stroke him and giggling if he licks their hands, but a few adults are just as keen. One man I met at Glastonbury Abbey declared that he needed a ‘labrador fix’ and proceeded to kneel down and rub my dog’s back, while my dog brushed against his legs merrily. Then he said: ‘thank you – I needed that,’ and added ‘they’re holier than us aren’t they.’

‘As I have loved you, so you must love one another,’ Jesus told his disciples (John 13:34). While the majority of humans find this commandment difficult to uphold if we are tired, in a rush or dealing with someone irritating, most labradors have a bottomless well of love for everybody.

My dog is called Meldir, which is a Lord of the Rings name (poor dog) – it means ‘friend’ in Tolkien’s Elvish language. He certainly is everybody’s friend. In his time he has crossed paths with all walks of life, including a couple of unpleasant criminals, and he greeted them all with the same affection. It could be argued that ‘oh he’s just a dog – he doesn’t realise who those people are or what they’ve done.’ But wouldn’t Jesus have showered them with affection too? After all, he told us to: ‘Love your enemies’ (Matt 5:44).

Even when Meldir has been bitten by other dogs, he has obeyed Jesus’ instruction: ‘If anyone slaps you on the right cheek, turn to them the other cheek also’ (Matt 5:39). He has never once bitten back.

Like Christ, many dogs seek out and love people who are in despair. One wonderful example of this is a golden labrador called Endal, who lived from 1995 to 2009 and served the Canine Partners for Independence charity. He pinpointed his future minder Allen Parton when he was just a puppy. Allen, an ex-Royal Navy Officer, had suffered a head injury during the Gulf War – as well as being in a wheelchair, he had very limited speech and severe memory loss; plus, feeling so downtrodden, he had tried to take his own life. Endal spotted him during a puppy training class and repeatedly fetched and deposited things on his lap without command, until Allen finally smiled (for the first time in months) and the bond was made.

Not only did Endal give Allen the unconditional love and patience he badly needed, he gave him his independence back as well. Via sign language the pair managed most tasks, including getting dressed. If Allen rubbed his chin, Endal retrieved his razor; if he patted his head, Endal fetched his hat. This amazing dog could load a washing machine, use a cashpoint, guide Allen across roads safely, use a lift and post letters! He even helped Allen do the weekly shop, responding to signs to pick up tins of beans, packs of cereal etc.

At Crufts one year, Endal saved Allen when a car reversed into his wheelchair in the car park. Allen fell out onto the tarmac and lost consciousness. CCTV showed what happened next. Using his teeth, Endal pulled Allen into the recovery position (something he had never been taught to do) and pulled the blanket in the wheelchair over him. He then fetched Allen’s phone and placed it by his head, but Allen didn’t respond so he bounded over to a pub and began barking until someone responded and an ambulance was called.

At A&E the nurses tried to move Endal away from Allen for hygiene reasons, but he refused to budge and remained at his side! He proceeded to cheer the other patients over the coming days, for example stopping a child crying by sticking his head under the curtain around the boy’s bed. ‘I think there’s a major Biblical misconception that Guardian Angels come with two legs,’ says Allen, ‘well in my case mine comes with four! And he is a life saver – he found me a long time ago in a pit of despair and dragged me from that… he’s taught me to live and laugh again, he’s taken away the hurt, the sadness, the pain.’

Over the centuries dogs have played a protective role for many Roman Catholic saints. For example Saint John Bosco, who set up houses and schools to help poor children in Turin in Italy during the 19th century, found himself with a four-legged guardian. At that time, the city was a dangerous place and several times people tried to attack Bosco, knowing he carried donated money for the poor. The first time this happened, in 1848, a huge grey mongrel appeared and knocked a thief wielding a knife to the floor. Bosco named the dog Grigio and from that day on could depend upon him to see off all threats. The dog once refused to let his adopted master go down one of the streets he walked along daily, somehow knowing that two armed men were lurking there waiting to attack.

Another saint famous for his four-legged friend is Saint Roch, who was born in Montpellier, France in 1295, with a mysterious cross mark on his chest. After his parents died, he gave all his wealth to the poor, keeping nothing but the family dog and set off on a pilgrimage. On his travels, he encountered people suffering from the plague. Without command, the dog instinctively starting licking at the sores on their skin and Roch made the sign of the cross on their bodies. Within days these people began to recover. The pair went from city to city repeating this dual act of healing, until Roch himself was struck down with plague. The dog licked at his sores and fetched him bread to feed him, and eventually his master recovered.

What incredible examples these dogs are to us as Christians. They love unconditionally without fatigue or complaint, always putting us first. Jesus has told us: ‘The greatest among you will be your servant’ (Matt 23:11). In this truth then, it’s fair to say that these kindly dogs, who will do anything to protect and serve us, who love us all equally, are far greater than we are.

Perhaps it sounds silly, but I can honestly say my dog has taught me more about spirituality than any human I’ve met. He is ever full of boundless joy and shows affection to everyone equally. To me, he’s the ultimate Christian.