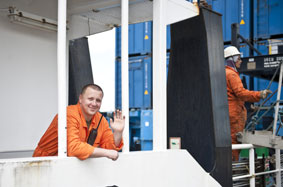 July 13 is Sea Sunday, when the Church asks us to pray for seafarers and support the work of Apostleship of the Sea, whose chaplains and ship visitors provide practical and pastoral help in ports around Britain.

‘There are few industries as defiantly opaque as this one. Even offshore bankers have not developed a system as intricately elusive as the flag of convenience, by which ships can fly the flag of a state that has nothing to do with its owner, cargo, crew or route,’ says Rose George, whose book Deep Sea and Foreign Going goes behind the scenes in the hidden world of shipping.

This month (July 13) is Sea Sunday, when the Church asks us to pray for seafarers and support the work of Apostleship of the Sea (AoS), whose chaplains and ship visitors provide practical and pastoral help in ports around Britain.

To experience the reality of the life of a seafarer, George joined the crew of Kendal, a container ship sailing between Felixstowe and Singapore. The journey took 39 days.

She soon discovered that much of what we buy in the high street – clothes, mobile phones, fruit, cars, fuel – has been transported by sea. The largest container ship, for example, can carry 15,000 boxes and hold 746 million bananas, one for every person in Europe.

Yet, despite the changes modern technology has brought to shipping, communication is still a major problem. Only 12 per cent of a ship’s crew have internet access at sea and two thirds have no access at all. Mobile phones often don’t work and satellite phones are expensive.

As a result, seafarers often lose contact with their family back home for weeks or months. Their child could be born, a parent or relative die, or some crisis could occur, and they wouldn’t know.

This is one of the areas where the Catholic Church and other churches have supported seafarers through missions. Many ports have seafarers’ centres, like the one in Immingham in Lincolnshire.

Father Colum Kelly, AoS port chaplain, lives in a flat above the seafarers’ centre in the docks. He told George that one of the most common requests from seafarers is for batteries, because a battery can mean a lot when you have been without one for several weeks. ‘Never underestimate the value of the small gesture,’ he said.
George said of Father Colum, ‘His is a ministry of small gestures with great impact. A SIM card, a battery, a gift for a man who has spent yet another Christmas at sea.

‘Colum’s combination of dog collar and hard hat puts him in a unique and useful position. He can be minister, but also listener. Often seafarers tell him things they would not dare tell people they consider to be more official. He is a safe pair of ears.

‘He stays because the newly ratified Maritime Labour Convention might fill those gaps between paper and practice and make decency required and indecency impossible. But if not, Colum will be there with his hard hat, meeting strangers who come to a strange land that they feed, clothe and equip.’

Sometimes those seafarers from foreign lands who arrive in ports around Britain need help to resolve issues over pay or conditions on board their ship. And it’s often the local Apostleship of the Sea chaplain who they turn to for help.

Sister Marian Davey, AoS chaplain to Ipswich, Harwich and Felixstowe, was recently asked by three Filipino seafarers to help them make a complaint against the captain.
‘They had been on the receiving end of constant verbal abuse and public humiliation since this particular captain came on board. Their confidence and morale was undermined on a daily basis for at least two months,’ she explained.

‘It was with great reluctance that they decided to come and talk to me about the situation. Their main concern about lodging a formal complaint was fear of consequences, which might well result in being blacklisted by the manning agency in Manilla.’

She met the seafarers and listened as they described the behaviour of the captain towards them. ‘They didn’t want any help in terms of International Transport Workers’ Federation (ITF) or other maritime organisations. They asked for my help for them to write the narrative which needed to accompany the documentation for the complaint.

‘Whilst I was working with them on the narrative I was really impressed by the way in which they were assessing the risk factor involved.

‘For example, possible problems with getting a new contract and anxiety about how they might feed their families whilst trawling round to other manning agencies in order to get the next contract.

‘It was a difficult process for all of them and it was quite humbling for me to witness how difficult it was for them to address their basic employment rights, which we take very much for granted.

‘Following discussions with each of them only one seafarer had the courage to go ahead with the complaint. He felt he had reached the end of his capacity to tolerate such insulting and abusive behaviour. The other two felt that it would be too risky to go ahead.’

‘As the ship has not since returned to Felixstowe I have no idea of the outcome. I gave them the contact details of chaplains and ITF in case they needed ongoing support for the rest of their contract.’

Of course, nurturing the spiritual life of seafarers remains a central part of AoS chaplains. Douglas Duncan, port chaplain to Aberdeen and north-east Scotland, said that before he boards a ship he prays to the Holy Spirit for guidance.

Many of the seafarers he meets are from the Philippines and have a strong Catholic faith. ‘In Peterhead I visited a ship where there were a number of Filipinos and following our meeting with the captain he asked all his men to meet in the galley, as the chaplain was on board.

‘I met with the crew and we read the day’s Gospel together and discussed what the reading meant to them. It was wonderful to feel and know that the Holy Spirit was with us. A couple of the seafarers welcomed prayer ministry and I knew that I was in the right place at the right time.’