The Dalai Lama – Beacon of Harmony 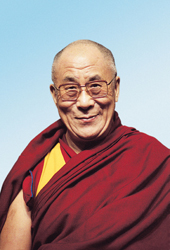 His Holiness the 14th Dalai Lama is a beacon of harmony, paving the way for understanding and peace between his own religion, Buddhism, and other faiths.

One of the reverent names for the Dalai Lama is Kundun, which means ‘presence’ in his own language, Tibetan. When I was lucky enough to see His Holiness give a talk in London in 2005, I understood why. When he entered, the hall was filled with the presence of love. He spoke of peace and compassion between individuals and nations, but underlying it all was the very moving reality that he walked his talk – he was genuinely happy and kind.

Bodhisattvas were followers of the Buddha, similar to the Disciples of Christ, who have achieved a spiritual maturity, just like our Saints. In the Buddhist faith, it is said that they have postponed their own ‘nirvana’ (which is the state of oneness that we could compare to our own Christian concepts of heaven and sainthood).

Because Buddhists (like Christians) regard compassion as more laudable and sacred than any other virtue, Avalokiteshvara is revered more than any other Bodhisattva. Despite this the affable, humble Dalai Lama refers to himself as ‘a simple Buddhist monk’.

Reverence for all faiths
Over the years, His Holiness has held and been involved in many interfaith gatherings. He has spent time with contemplatives and leaders of other faiths and has firm friends in other religions, for example Desmond Tutu. He famously spent time in silent contemplation under the Bodhi Tree in India (under which the Buddha is said to have attained enlightenment) with Christian monks and nuns, as well as Muslims, Hindus and Jains.

‘I am committed to the view that genuine harmony between the world’s religions is achievable,’ he has said. The Dalai Lama’s model for interfaith harmony is what he calls pluralism. This is not trying to reduce everybody to the concepts and theologies of one’s own beliefs, but rather celebrating our multi-faith society.

As a young man, he was inspired by the American Trappist monk Thomas Merton’s interfaith journeys around Asia, during which the pair had long talks. The Dalai Lama names Merton as one of the people who has most impacted his life: ‘The impact of meeting him will remain until my last breath,’ he said on a visit to Merton’s Abbey in Kentucky, after Merton’s death.

He was also deeply inspired, he has said, by a Benedictine monk he met at the monastery of Montserrat near Barcelona in the 1980s. Of his years as a hermit, the brother told the Dalai Lama that he had done nothing but meditate on love. Love being a central theme of Buddhism, the Dalai Lama said he felt a kindred spirit with Christian contemplatives.

Bound by Love
The essence of the Dalai Lama’s belief in interfaith harmony is of course founded upon love: ‘When it comes to actual spiritual practices, which I consider to be the essence
of these religious teachings, as opposed to metaphysical or theological formulations, there is profound convergence across all traditions. All carry the message of love, compassion and universal brotherhood and sisterhood.’

When speaking of Christianity, he is ever in awe of Jesus’ self-sacrifice, since suffering for others and serving others is a core part of his Buddhist beliefs and practice. ‘To a Buddhist like me, brought up to uphold the ideal of compassion as the highest possible spiritual value, the image of Jesus on the Cross – taking on himself the suffering of all beings – is deeply inspiring. Such self-sacrifice, born out of altruism and universal love for all beings, is a perfect example of what Buddhists might term the Bodhisattva ideal.’

The Dalai Lama has drawn parallels between the Gospel and Buddhist teachings. ‘The compassion embodied in Jesus that is beautifully captured in the scriptural commandment ‘Thou shalt love thy neighbour as thyself’… For a Buddhist, this is the essence of the practice of love and compassion.’

He also has a great reverence for the Biblical instruction to love your enemies. Upon first hearing the famous poem by St Francis of Assisi (‘Lord make me an instrument of Thy peace; where there is hatred, let me sow love…’), he thought he was listening a Buddhist text. The Way of the Bodhisattva, written by an 8th century Buddhist monk called Shantideva, is very similar to St Francis’ poem in parts: ‘As long as space remains, as long as sentient beings remain, until then, may I too remain and help dispel the miseries of the world.’
A shared humanity
We are all moved by love and we all need love and therefore we should regard all human beings (religious or secular) as brother or sisters. Then we will be truly bound by love in peace.

Compassion, says the Dalai Lama, is the natural capacity of the human heart to feel concern for and connection with another being and it constitutes, he believes, the foundation of our happiness.

‘When we see another person, let us feel our basic affinity. In this place, there are no strangers – all are brothers and sisters in their journeys through life.’

‘DEEP REVERENCE’
The Dalai Lama’s words on interfaith harmony:
‘For a devout religious person, it becomes important to reserve faith for his or her own religion, while cultivating respect – in fact, deep reverence – for other religions.’
‘Finding a balance between single-pointed commitment to one’s own faith and genuine openness to the value of other faiths has come to be a deep personal quest.’
‘Creating a single religion for the world, whether a new one or one of the old ones, is simply unfeasible.’
‘The ultimate reason to accord respect to other religions is to see that they, too, engender the beautiful qualities of the human heart and foster compassion and loving kindness – exactly the qualities one is striving to attain through one’s own faith. ‘
‘While admitting our metaphysical differences, if we can truly appreciate that compassion is our collective and fundamental spiritual value, then we can speak with one voice.’