Be Missionaries of God’s Love 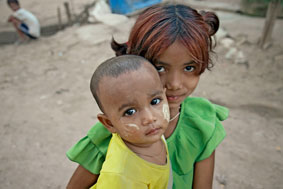 Megan Cornwell, Communications Manager at Missio, explains the vision behind this year’s World Mission Sunday campaign on October 19 and tells us about the clergy in a Catholic diocese in northern Myanmar (Burma) who are reaching out with love to a community in desperate need.

Row upon row of cobbled-together corrugated tin shacks leaking with water from the recent monsoon rains, line St Paul’s Church compound in Myitkyina diocese in northern Myanmar (formerly known as Burma) where Bishop Francis Daw Tang lives and serves his people. It used to be an ordinary church site, but since war broke out in Kachin State three years ago, hundreds of families fleeing their homes have found refuge here. It is one of the few places where they feel safe.

Little has been written about the Burmese Civil War in Kachin State. When the military took over in 1962 many foreigners, including missionaries, were expelled from Burma, making it difficult for journalists to gain entry into the country to report on human rights abuses. Although some reforms have recently been made to increase press freedom and reduce censorship, the nominally civilian government still make it difficult for visitors to move around Myanmar freely. And with other conflicts raging around the world, such as the horrific wars in Syria, Iraq and South Sudan, this conflict has hardly ever made headlines in the UK, and because of this, has often been referred to as Burma’s ‘forgotten war’. Yet people’s suffering in this region of South East Asia is very real. Over 100,000 people have fled from their homes since the Burmese Army broke the 17-year ceasefire in 2011. Since then, wives have lost husbands to the fighting, children have lost parents and homes have been destroyed as villages were bombed. People have also lost their livelihoods in the conflict and the future seems bleak for the many people with nowhere to go.

In St Paul’s, one of the Internally Displaced People (IDP) camps run by the Catholic Church, there are 400 people seeking refuge and support. Over half are children; some babies have even been born here. These children are the innocent collateral of a war that has been raging for over three decades between the Burmese military and the Kachin Independence Army (KIA). Kachin State, which is roughly the same size as Portugal, is rich in terms of natural resources – minerals, timber and, more recently, hydropower from the nearby Myitsone dam. Strategically it is important for the Burmese government who are brokering business deals with the Chinese in the north. The Kachin people believe their voices are not being heard by those in power, and on top of this, their communities aren’t seeing any benefit from foreign investment (90% of the electricity generated by the Myitsone dam will go straight into China). The violence with which their resistance has been met has forced many Kachin men and women to take up arms and fight a defensive war against one of the best resourced armies in South East Asia.

But, as is the case in so many conflicts, it is the children growing up in IDP camps who are suffering most. They are living in cramped, unsanitary conditions with access to little or no education. One mother is living in a single room in a tin shack measuring 7ft by 5ft (the equivalent of a small bathroom in a British home). This is where she sleeps eats and cooks with her four children. And she is not the exception to the rule. Space and resources are limited in St Paul’s and many families are in similarly desperate situations, some having to sell any valuable possessions they own or take out crippling loans just to feed their hungry children. One young woman recounts how she travelled by boat with 40 other families after the army shelled their village. ‘They were trying to hit the KIA but some people in the village died,’ she says sadly. ‘Now we have nothing – not here, not at home’. These mothers live in daily fear that their children may catch water-borne diseases from the overflowing latrines that have flooded in the monsoon.

People living in St Paul’s have lost everything and they are afraid to go home. Some of their villages are still under the control of the Burmese Army, which has a shocking record of torture, rape and forced labour, and many have unexploded land mines where their homes used to be. It is simply too dangerous to return.

Sadly, conditions in the camps are dire because humanitarian aid and access is sporadic. International NGOs can gain passage into government-controlled areas but the IDP camps in rebel-controlled areas are blocked off from international eyes. Only a limited number of UN convoys have been allowed to enter the rebel-controlled areas (the first aid convoy in nearly two years was delivered in September 2013). The continued displacement of people from their homes has put enormous pressure on supplies of food, medicines, blankets and clothing.But the Catholic Church is not an international NGO, it is made up of local priests, sisters and lay people who have dedicated their lives to sharing Jesus’ message of hope and love with their communities. This means they are best placed to reach the places and people who can’t otherwise be reached at times of conflict.

Since foreign missionaries were expelled from Burma in 1962, Missio, the Pope’s official charity for overseas mission, has been supporting the growth of the Church through grants to train new priests and sisters, stipends for bishops to run their dioceses and funding for children’s projects and catechism resources in its 16 dioceses. Despite many restrictions on building churches and religious freedom, the faithful of Myanmar, who make up less than 1% of the majority Buddhist population, are strong and committed.

In St Paul’s, amongst the suffering and daily hardships, the Catholic Church shares the hope-filled message of Jesus at a weekly Mass for the 100 families living there. Fr John, a young priest from the local diocese, leads the service. ‘Everyone in the camp attends’, he explains, ‘it brings them some hope’.

Along with spiritual and pastoral support, the Church is also providing for people’s practical needs – shelter, food and medicines, as well as counselling programmes for people suffering emotional trauma as a result of the terrible things experienced in the conflict. An orphanage run by the Sisters of St Francis Xavier is a life line for children orphaned by the war. The sisters are also running schools and training programmes so that children do not lose all hope of future employment after the war is over. Without this support the situation in St Paul’s would be much more desperate.

Bishop Francis and his priests are also playing an integral role mediating between the KIA and the Burmese government. Having witnessed the immense and widespread suffering throughout Kachin State, the Bishop had no other option but to help. ‘The Church was not involved in political negotiations at first’, he says, ‘but we had to do something – look at how people are suffering.’ Known for his humble demeanour and practical approach to running his diocese, Bishop Francis is respected by rebel leaders and government officials alike. He is the ideal character to move peace negotiations forward. But even Bishop Francis admits that peace will not come easily. He estimates that it could take 2-3 years after the conflict ends before families can return home to their villages and even then, it will take 6 months to start de-mining the land and relocate the 100,000 displaced people.

As the international community turns its attention to more high profile conflicts in other parts of the world, the Church is at risk of becoming increasingly isolated in its work in Myanmar. But on World Mission Sunday Catholics can make sure the people of Myitkyina diocese are supported until peace is achieved. By making a generous contribution in the parish collection on 19 October or by giving directly to Missio, we can ensure that wherever there is injustice, poverty or uncertainty, the Catholic Church is able to reach out with the hope of the Gospel and remind people that they are remembered and loved by God.

If you would like to know more about the work of Missio or contribute to the World Mission Sunday collection for parishes in need overseas, please visit www.missio.org.uk or call 020 7821 9755.