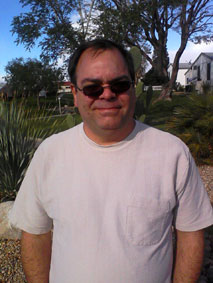 Prison, as Bible Alive has often reported, can be a place of transformation, of inner redemption. A place where lives are changed. No one knows this better than James Bishop, an American ex-felon, former alcoholic, and sufferer from OCD.

‘Prison saved my life,’ he says, simply. Today, Bishop is a free man who says he feels ‘calm, and centred.’

In 1999, at the time of his arrest, Bishop was drinking the best part of 4 bottles of whisky a day, and was prey to extreme paranoia: ‘I thought the end of the world was coming. I was stockpiling rations.’

Daily, Bishop was tortured by mental rituals: ‘I counted things, I did a lot of mental rituals to keep my brain going. It was very painful and the worst part was that no one I knew was aware I had this’.

Even simple things like eating were a minefield: ‘When I ate M&Ms I would press them lightly together to see which was the weaker one and I’d eat the weaker one and keep the stronger one. It got really nutty. Everytime now I eat them and I pour them into my hand I think, I could never have done this before,’ he laughs.

On the outside, he appeared not just normal but highly successful. A computer software executive, Bishop worked for a decade in Artificial Intelligence in Washington. He was married, and had a son now 23 and a US marine.

Yet inside, he was imploding. Eventually, this led Bishop to commit the crime which saw him sentenced to 12 years in a Californian prison. Classified a violent offender, Bishop was sent to the substance abuse facility of the Californian Correctional Institute: ‘On day one I was strapped into a chair and deemed a danger to myself and others. A psychiatrist said I suffered from extreme levels of OCD (Obsessive Compulsive Disorder).’

What made the million-dollar difference was discovering Christian meditation. Raised a Catholic, Bishop who was born to a 15 year old in a Los Angeles Convent and subsequently adopted­, had returned to Church in prison.
Then a nun asked him to a talk on meditation: ‘I had tried it previously many years before when I was in High School and I found it completely useless because getting my brain at that time to focus on anything was nigh impossible, so I didn’t think it was going to be very helpful.’

This time, the results surprised him: ‘I kept doing it and slowly began to regain my sanity.’ Slowly but surely, his life improved. His anxiety levels dropped to the point where he was able to come off medication for OCD. And as the meditation stilled his churning mind, Bishop found a new, never-before-experienced connection to God.

‘Through that connection I was able to begin healing,’ he says. Now, twice every day, for 20 minutes Bishop closes his eyes, and repeats the word Maranatha a Biblical phrase which means ‘Come Lord Jesus’. And as Bishop says this, he focuses on his breathing in as he says MARA, out as he says NATHA. The words are Aramaic the actual language Jesus spoke.

A major help on his journey to wholeness was discovering the Rule of St Benedict. Written in the 6th century for a monastery in Italy, it will help anyone seeking peace, says Bishop: ‘The very opening word of the Rule is ‘Listen’ and that is exactly what we are doing when we meditate, so if you want the instructions for meditation you only need the first word of the Book, but to understand what he means by that you need the rest of it.’

While in prison, Bishop became a Benedictine Oblate, a lay follower of Benedict’s Rule. He says he belongs to a ‘wall-less’ monastery, meaning he is united through his daily meditation to Benedictines all over the world, whether oblates, monks, or nuns. Bishop, like all oblates, will do some form of Lectio Divina, the slow, prayerful method of reading a Bible passage three times.

Bishop is part of the Worldwide Community for Christian Meditation, whose first centre was founded in Ealing Abbey in 1975 by Father John Main OSB. Today, the WCCM sponsors retreats and seminars teaching meditation.

When I meet Bishop, on a boiling day last July, he is in the World Community for Christian Meditation Centre in London, in Ealing. He’s come to give a talk at a seminar: ‘On Justice & Meditation in Prisons’. A stream of people interrupt the beginning of this interview to shake Bishop’s hand, and say how great his talk was.

It’s something he could never have imagined in prison, where he first met the director of the WCCM, Father Laurence Freeman OSB. Father Freeman was one of the guests (along with 50 inmates) at Bishop’s ceremony to become a Benedictine Oblate.
While in the prison, Father Freeman was struck by ‘an uncanny feeling of familiarity’.’ He explains: ‘Eventually it dawned on me it was because it seemed like a monastery. It was enclosed, institutional and highly structured.’

Bishop agrees. In prison, he found meditating ‘very easy’ because in prison everything was done by the clock.’ Favourite times to meditate were before ‘morning chow’ (breakfast) and at ‘count time’.

As for noise, once, he managed to lead the meditation group he ran in prison in a day room where prisoners had gathered to watch a wrestling match: ‘The noise was incredible sitting next to a jet taking off is probably quieter than this was, everyone was screaming for their own favourite wrestler and here I was with several of my friends and I said ‘well ok, I guess we are going to try to move into silence’. I was thinking this is either the dumbest thing I’ve ever done or it is going to be brilliant.’ So we gave it a shot and I was really surprised that it was one of the best sessions I’d had in meditation.’

Now Bishop has designed and runs a website on meditating for prisoners: www.wccmprison.org).

When he was released on parole, Father Freeman suggested Bishop write a commentary on Benedict’s Rule for those imprisoned.

The result is ‘A Way in the Wilderness: A commentary on the Rule of Benedict for the Physically and Spiritually Imprisoned.’

Through the Rule and through meditation I have come to know that I was in a self-made prison for many years,’ Bishop writes, ‘and when I was finally sent to a physical prison, I became freer than I had ever been before in my life’.

And his link with prisons doesn’t end there. Last summer Father Freeman asked Bishop to co-ordinate the international prison outreach for the World Community for Christian Meditation.

Even before this, Bishop was receiving up to 50 letters a month from inmates: ‘I got a letter the other day from a guy in Illinois his name was John and I remember him saying thank you for the work that I do. Few people, unless they’ve been in our shoes, understand how we feel, and that really touched me,’ says Bishop.

More than 9 million people live in prisons worldwide. Their lives could be transformed by meditation, Bishop says, adding that in fact, if the whole world meditated the result would be world peace. ‘Ha ha,’ he laughs. ‘Let’s go for the gold here.’

A Way in the Wilderness: A commentary on the Rule of Benedict for the Physically and Spiritually Imprisoned. Published by and available from Continuum for £12.99. www.wccm.org

« Be Missionaries of God’s Love
My Christmas by Julie Etchingham »