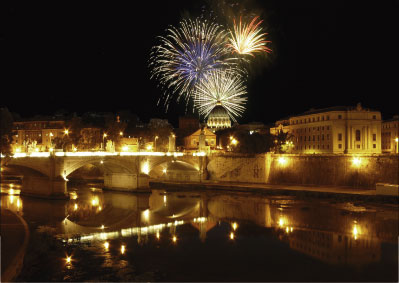 Every New Year brings with it the opportunity to have a new year resolution. They are by no means mandatory and many of them are predictable. Most have to do with giving up an old ingrained habit or taking up exercise or going on a diet. The truth is, research has shown that very few are able to stick to the resolutions they vow to on New Year’s Day.

The reason we make a new year’s resolution is because we want to change our lives in a way which brings joy and happiness. No matter what fitness regime we take up, or diet we go on or new hobby or new job we take up – true and lasting happiness can be found in God, and God alone. This is not because other things don’t make us happy, it is simply because the joy and happiness they bring is fleeting and transitory.

True joy comes from being close to Christ, living the Beatitudes and serving the poor. Pope Francis is a kind of beacon of joy. He is manifestly living a joy-filled life and he suggested 10 ways we could have joy in our own lives.

So we offer to you Pope Francis’ very own 10 New Year resolutions.

1. Live and let live. Everyone should be guided by this principle, he said, which has a similar expression in Rome with the saying, ‘Move forward and let others do the same.’

2. Be giving of yourself to others. People need to be open and generous toward others, he said, because ‘if you withdraw into yourself, you run the risk of becoming egocentric. And stagnant water becomes putrid.’

3. Proceed calmly in life. The pope, who used to teach high school literature, used an image from an Argentine novel by Ricardo Guiraldes, in which the protagonist – gaucho Don Segundo Sombra – looks back on how he lived his life.
He says that in his youth he was a stream full of rocks that he carried with him; as an adult, a rushing river; and in old age, he was still moving, but slowly, like a pool of water. He said he likes this latter image of a pool of water – to have the ability to move with kindness and humility, a calmness in life.

4. A healthy sense of leisure. The pleasures of art, literature and playing together with children have been lost, he says.
Consumerism has brought us anxiety and stress, causing people to lose a healthy culture of leisure. Their time is swallowed up so people can’t share it with anyone.
Even though many parents work long hours, they must set aside time to play with their children; work schedules make it complicated, but you must do it, he says.
Families must also turn off the TV when they sit down to eat because, even though television is useful for keeping up with the news, having it on during mealtime doesn’t let you communicate with each other.

5. Sundays should be holidays. Workers should have Sundays off because Sunday is for family.

6. Find innovative ways to create dignified jobs for young people. We need to be creative with young people. If they have no opportunities they will get into drugs and be more vulnerable to suicide.
It’s not enough to give them food, he said. Dignity is given to you when you can bring food home from one’s own labour.

7. Respect and take care of nature. Environmental degradation is one of the biggest challenges we have. I think a question that we’re not asking ourselves is: Isn’t humanity committing suicide with this indiscriminate and tyrannical use of nature?

8. Stop being negative. Needing to talk badly about others indicates low self-esteem. That means, I feel so low that instead of picking myself up I have to cut others down, the pope said. Letting go of negative things quickly is healthy.

9. Don’t proselytize; respect others’ beliefs. We can inspire others through witness so that one grows together in communicating. But the worst thing of all is religious proselytism, which paralyzes: I am talking with you in order to persuade you, No. Each person dialogues, starting with his and her own identity. The church grows by attraction, not proselytizing.

10. Work for peace. We are living in a time of many wars, he says, and the call for peace must be shouted. Peace sometimes gives the impression of being quiet, but it is never quiet, peace is always proactive and dynamic.

He also fondly recalled the woman who helped his mother with the housework when he was growing up in Buenos Aires.

Concepciòn Marìa Minuto was a Sicilian immigrant, a widow and mother of two boys, who went three times a week to help the pope’s mother do laundry, since in those days it was all done by hand.

He said this hard-working, dignified woman made a big impression on the 10-year-old future pope, as she would talk to him about World War II in Italy and how they farmed in Sicily. She was as clever as a fox, she had every penny accounted for, she wouldn’t be cheated. She had many great qualities, he said. Even though his family lost touch with her when they moved, the then-Jesuit Father Jorge Bergoglio later sought her out and visited her for the last 10 years of her life. A few days before she died, she took this small medal out of her pocket, gave it to him and said: ‘I want you to have it!’ ‘So every night, when I take it off and kiss it, and every morning when I put it back on, this woman comes to my mind. ‘She died happy, with a smile on her face and with the dignity of someone who worked. For that reason I am very sympathetic toward housecleaners and domestic workers, whose rights, all of them, should be recognized and protected’, he said. ‘They must never be exploited or mistreated.’

Pope Francis’ concern was underlined in his @Pontifex Twitter feed just a few days later, July 29, with the message: ‘May we be always more grateful for the help of domestic workers and caregivers; theirs is a precious service.’