When God Calls, How do we Answer?

Alive Publishing > Alive Newstitle_li=Faith Today Articles > When God Calls, How do we Answer? 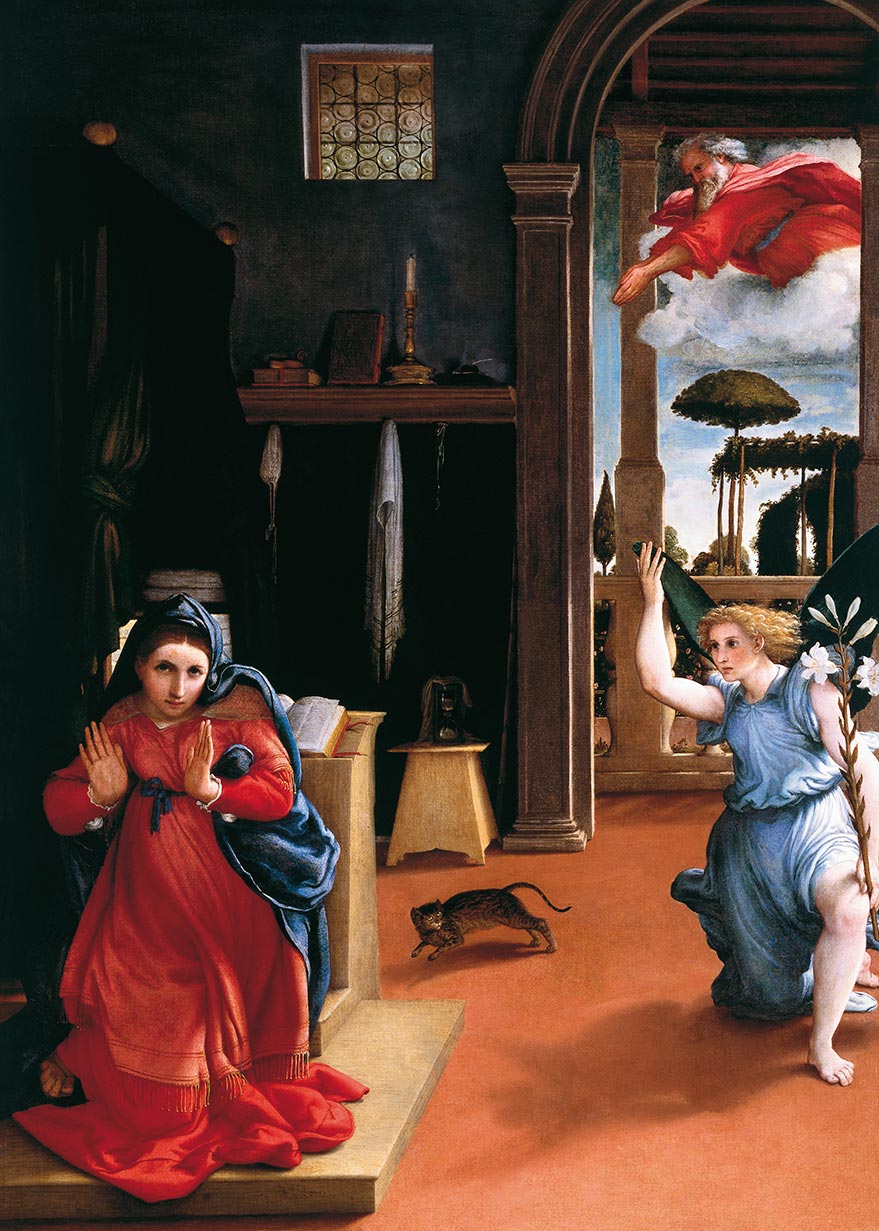 On 25 March the Church celebrates the feast of the Annunciation. Lucy Russell explains how that moment in history speaks to her heart and her experience, and how her thoughts on it are helped by a piece of high Renaissance art.

‘The Angel Gabriel was sent by God to a town in Galilee called Nazareth, to a virgin betrothed to a man named Joseph, of the House of David; and the virgin’s name was Mary. He went in and said to her, ‘Rejoice, so highly favoured! The Lord is with you.’ She was deeply disturbed by these words and asked herself what this greeting could mean, but the angel said to her, ‘Mary, do not be afraid; you have won God’s favour. Listen! You are to conceive and bear a son, and you must name him Jesus. He will be great and will be called Son of the Most High.’
(Luke 1: 26-32)

Of all the famous paintings which attempt to portray this miraculous moment, my favourite is The Annunciation by Lorenzo Lotto. In this painting Our Lady appears to turn her back to God and his messenger. It is a fascinating piece that speaks to me of how Mary might have felt: surprised and utterly overwhelmed. There she is at home, going about her daily business, when an angel suddenly appears to her to ask her to be the mother of God. Italian art critic Giulio Argan writes: ‘she cannot even turn her head; her gesture, almost a defensive one, is that of somebody who is struck at the back by a sudden call.’ It is the most incredible and unexpected news. Lotto suggests that it takes Mary aback, she needs a few moments to assimilate it, before she can respond.
The Italian artist paints a scene set in a domestic environment, beautifully summing up the interruption to Mary’s life. Her home is tidy and clean, indicating a well ordered and organised life. Which has just been shattered. Whatever Mary was doing, she was not expecting a visit from a messenger of God. Whatever Mary was planning for her life, it was not this. In Lotto’s painting Mary seems scared, but she is not the only one. The angel also appears to be frightened by the enormity of what is happening; he has his eyes wide open in disbelief and is pointing to the God, the higher order which no one can escape – except possibly the cat. He is the only one in this scene who may be able to run away! Unhappy with all the fuss that has come to break the quiet routine of its life, he seems to be making a run for it! We know that Mary makes a decision, and then responds. In Lotto’s painting, you can almost watch Mary processing the angel’s message, and that decision forming in her mind.

In his book Real Presences: Is There Anything in What We Say?, The philosopher George Steiner writes about narrative in aesthetic form: pictures that ‘speak’. Lorenzo Lotto’s work spoke to me in a way which was beyond words, it conveyed a feeling of overwhelming emotion. Steiner believes that God is present and speaks to us through the arts and humanities. Aesthetic creation – the arts – exist, he says, because of creation. A similar notion about the link between the arts and God was noted by the character of Reverend Adam Smallbone in an episode of the BBC’s, Rev, ‘In a way all art is an attempt at some level to describe creation. So you could argue, that it’s always a religious act’ (Series 3, Episode 3). The art world is filled with the presence of the Virgin Mary: we have representations of Our Lady in different races, with her child, Jesus, and alone. The Virgin in Art (Kyra Belan) is a good starting point for those wishing to explore the meaning to be found in images of Mary, from personal interpretations to spiritual reflections.

If art is, as Steiner says, where we can find the Real Presence, then choosing to engage with these images is itself an act of faith. Steiner himself says, ‘[people] will elect bingo or the television chat-show over Aeschylus or Giorgione’. It’s true. Many of us often choose light entertainment, ‘bubble gum for the eyes’, over high culture. We all have the propensity to turn our back on God.

But why? Perhaps because to engage with him is too overwhelming, too incredible, too mind-blowing. However, we can learn from Mary here, I look at Lotto’s Annunciation and understand Mary’s defensive gesture: motherhood and its prospect can be daunting for any woman, but to be asked to be the mother of God is breath-taking. I imagine the scenes which come next which Lotto didn’t paint: Mary taking a deep breath, and turning towards the angel. We know when we look at Lotto’s painting she is only moments away from positively responding to God and uttering the words that would be the foundation of our prayer, The Angelus: ‘I am the handmaid of the Lord,’ said Mary, ‘let what you have said be done to me’ (1:38).

The Annunciation is celebrated this year on 25 March, ten days following Mothering Sunday, so it’s a good time to think about the Mother of God, her life, and what we can learn from Mary in our everyday lives. Pope Francis has emphasised three aspects of the caring motherhood of Mary: ‘She helps us grow, to confidently face life, to be free.’

My dedication to Mary has grown since I became a mother. When I held my first baby for the first time, such was the sense of awe and wonder I experienced, that I forced myself to think of something other than God and creation. I told myself to try and put off exploring the thoughts in my mind until I wasn’t so tired. I could sense God’s presence, he felt closer than ever before. It seemed as though suddenly everything made sense. I understood, but that understanding was too great to contemplate. James was a miracle and gave meaning to my life, I concentrated my thoughts on him. It was a very emotional time. As a writer my instinct was to try and put my thoughts into words, but I didn’t have the words. I was so overwhelmed I effectively turned my back on God and what he was trying to communicate to me, pushing these thoughts out of my mind until a later time when I thought I would feel able to cope with and contemplate them. But that time never came. Looking back, I see those thoughts not as something to be explored and organised but as a complete experience which transcended words. As James grew my initial excitement developed into a calmer and deeper faith. I understood God in a new way as James’ spirituality awakened. On trips to the beach in winter I found myself playing with James and racing the waves to the shoreline as I wondered at creation. It was when I recently came across Lorenzo Lotto’s Annunciation that I was reminded about those very early days of motherhood, and the feelings I experienced then.

All sorts of unexpected events surprise us as we go through life. The big question is, can we follow Mary’s example and, like her, respond by taking a deep breath and having the confidence to turn to God in prayer?