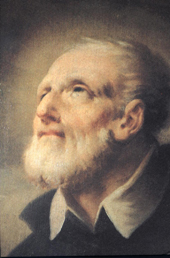 All God’s friends are, in a sense, unusual people, but some are, perhaps, more unusual than others. Philip Neri falls easily into this latter category.

His long life, which spanned nearly the whole of the sixteenth century, is a beautiful testimony to what can be achieved when a Christian allows the Holy Spirit to take control of his life. It was the age of the Reformation, and Europe was full of people busily and angrily setting the world and the church to rights. Philip was not by desire a reformer, but the Holy Spirit was to sweep him up along with the likes of Ignatius, Cajetan and Teresa and use him to bring about the renewal and reform of the Church from within. At times he longed to be a missionary in the Far East with Francis Xavier, but the Lord made it clear that his field of action was to be the city of Rome itself, which seemed to have forgotten God and become almost as pagan as it once was in the days before Emperor Constantine.

Philip, a Florentine by birth, arrived in Rome in 1535 when he was eighteen years old, and, as Luther before him, he saw the sorry state of the eternal city, degenerate and worldly. But instead of running away in despair, he chose to remain there doing what he could to help restore the faith and reawaken the love of Christ in the hearts of the Roman people. However, Philip knew that before he was to work for the conversion of others, he must begin by converting himself. First, he enrolled at the Roman University where he studied philosophy and theology with the Augustinians. After a few years he sold his books and gave the money to help poor students. He had decided to give himself completely to the Lord. How did he do this? In order to find God in solitude and quiet, Philip would take himself off to the Catacombs of St Sebastian a little way out of the city and would often spend whole nights there in prayer. He did this because he felt that there he could be in closer contact with the early Christians who had themselves taken refuge in the Catacombs in times of persecution. It was in the Catacombs that Philip had the extraordinary experience that was to shape the rest of his life’s work. On the eve of Pentecost 1544, Philip was praying to the Holy Spirit. Suddenly he seemed to see a ball of fire which entered his mouth and went deep into his breast, filling him with an intense heat and an overpowering sense of the love of God which was to remain with him all his life.

It was at this time that Philip’s apostolate took off. He had no intention of becoming a priest, he simply wanted to love God which was to remain with him all his life.

It was at this time that Philip’s apostolate took off. He had no intention of becoming a priest, he simply wanted to love God and do his work as a layman in the world. Each day, he would wander about the city, visiting the wine-bars, banks and warehouses (places no priest would have been welcome), and he would talk about God to the people he met there, and he did this in such a way that no one ever felt patronized or preached at. Then Philip would issue the challenge very gently, ‘Well, my friends, when shall we begin to do good?’ He made people think about their religion and the meaning of the life God had given them. Rather like the Pied Piper, Philip had the ability to attract young people ‘as a magnet draws iron’, it was said. He began with a few enthusiastic disciples, who came each day to his rooms to pray, sing and hear the Word of God, but before long, Philip’s meetings (soon called the Oratory) became so popular that larger premises had to be found to accommodate everyone who wanted to attend.

Ordination and the Oratory

Eventually Philip was forced to agree with his confessor that the Lord was indeed calling him to be a priest. He was ordained in 1551 and went to live with a small community of priests who acted as chaplains at the church of San Girolamo della Carita. From then on the work really began to flourish.
Each morning, Fr Philip would make himself available to anyone who wished to come to him for confession. Then he would celebrate Mass. In the afternoon, the crowds would assemble in the Oratory. Here they would hear readings from the scriptures or from the Father or some other spiritual writers. There would be sermons and discussions, and always prayer and singing to bring the meeting to a close. In all this lay people took a leading part, and it was only after some years that Philip thought it necessary to have some of the members of the community ordained in order to serve the Oratory. This was how the Congregation of the Fathers of the Oratory came to be.

Philip’s aim was to show people the love of God, ‘to make people saints in their own homes’. He wasn’t one for programmes and plans. ‘Let a little love into their hearts and God will do the rest’, he would say. That was the way he worked. ‘Be good, if you can.’ Instead of giving his friends methods or systems of prayer, he would tell them, ‘Be humble and obedient and the Holy Spirit will teach you.’ He always encouraged people to undertake what they could manage, rather than begin enthusiastically and ambitiously and give up discouraged. ‘Not many devotions, but much devotion’, he would caution them. ‘Better to say one Our Father with devotion than a thousand without.’ He taught one woman to pray by helping her to think about the Our Father clause by clause. ‘Just think what it means to have God as your Father.’

As a spiritual director, Philip was always gentle and never bullied his penitents into adopting a line. For example, to the young man whose ambitions were wholly set on success in this world, he merely posed the question: ‘And then…?’ He left the boy to draw the lesson for himself and in fact he later abandoned thoughts of a career and offered himself to Philip’s Congregation. To a young woman who was wearing unsuitably high-heeled shoes he said cheerfully, ‘Take care you don’t fall over!’

Besides prayer and spiritual direction, another essential aspect of Philip’s work was his encouragement of lay involvement in works of charity. Each day he and some of his group would visit the hospitals. This involved much more than sitting beside a sick person’s bed and being sympathetic. In those days, Roman hospitals offered little more than floor space to the sick, so sick visiting would mean really caring for the patients, washing them, taking them clean linen, food and even medicine. Initially, some of Philip’s grander disciples found this work uncongenial and difficult, but they soon overcame their distaste thanks to Philip’s encouragement and guidance.

The keynote of Philip’s life was joy. This was more than simply good humour, it was a profound and infectious joy which welled up from the indwelling of the Spirit in his heart. Moreover, he had the marvellous ability to communicate this joy to others, and would often hold those who felt desolate or unhappy to his breast. The effect was amazing! Such people went away rejoicing. His sense of humour is well known. One day he struck one of his penitents. ‘It’s not you,’ he explained, ‘it’s the devil I’m hitting!’ Often at High Mass, Philip would sit in the church while his hair was cut. Once he even appeared having had half his beard shaved off. Sometimes he would pretend to be drunk, or if important people came hoping to see ‘the Saint’, he would insist on having jokes read to him by one of the Fathers. Why did he do all these odd things? To hide his genuine holiness. The last thing Philip Neri wanted was that anyone should think of him as a saint. But a light set on a hill-top cannot be hidden, and the people of Rome, rich and poor, clerical and lay, recognized the Holy Spirit working in and through this joyful, colourful character. On his death in May 1595 they were able to perceive the great change that had come over their city and their own lives and they put it down largely to the influence of Fr Philip who had shown them the truth about themselves and taught them to love God. He had teased them into not taking themselves too seriously but above all he had loved them enough to make his home with them. Small wonder then that the Romans claimed him as their apostle, to stand alongside Saints Peter and Paul; a huge honour no doubt, but one he richly deserved.

This article was written by Fr Dominic Jacob, who is based at St Aloysius, Oxford.