The Saint of The Waterfall

Alive Publishing > Bible Alive Articles > The Saint of The Waterfall 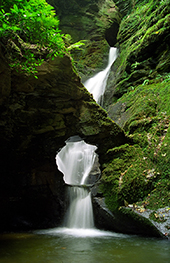 Two of the most idyllic pilgrimage sites in England are sacred to the little known Saint Nectan, a hermit who lived beside a waterfall.

When choosing your next holy destination for retreat or pilgrimage, you can’t go far wrong with the northern coast of Devon and Cornwall. Two spots along that beautiful shoreline are sacred to the little known Saint Nectan – the Hartland peninsula and the waterfall of Trethevy.

Nectan (also known as Nighton or Nectaran) was born in Wales in 468 AD. He was the eldest son of King Brychan of Brycheiniog (modern day Brecknock), who is said to have fathered 24 children!
Despite being of privileged birth and heir to his Father’s nobility and power, Nectan was drawn to a life of contemplation at a young age. Upon hearing tales of the Desert Fathers, in particular Anthony the Great of Egypt, he knew his vocation was to become a solitary.

When he was old enough, Nectan set sail from Wales in search of the place he could live out a holy life of prayer. He travelled in the company of several Welsh comrades, who nicknamed him ‘Buddy’ because he was so affable.

The tide led them to the beautiful north Devon coast at Hartland. Here rugged cliffs jut out into the sea dramatically and waterfalls plunge over them into the ocean. Nectan and his companions settled here in a wooded valley that runs between the coast and the villages of Stoke and Hartland. There in the shade of oaks, bluebells and other wildflowers bloom beside a stream and a great sense of peace hangs in the air.

Some legends say that Nectan and his companions lived in the valley, while the villagers of Stoke believe he dwelt beside a well further inland. This lies 100 yards from the church of St Nectan in the village – the little old well house is a gated stone structure and you can peer in to see the water bubbling up. During the Middle Ages, hazel trees grew around the spring, whose nuts (pilgrims believed) bestowed wisdom.

Perhaps seeking greater solitude, away from the community, Nectan eventually journeyed south to Cornwall. Obviously fond of the water, he once again settled close to the sea, this time in the woods of Trethevy, near Boscastle.

Today this is an incredibly beautiful pilgrimage site. Following a path beside the River Trevillet through a wooded valley, you eventually reach a waterfall, which plummets 60ft. Over time, the power of the water has punched a hole in the original rock basin, which the waterfall now cascades through into a deep pool below.

Known to pilgrims as St Nectan’s Glen, the site attracts many visitors and now has a little cafe within the woodland. There is an old building above the waterfall, which is thought to have been the hermitage cell of Nectan and the ruins of a Christian chapel form the lower part of the little 19th century cottage that stands close by.
The streamside path leading to and from the waterfall is an ancient pilgrimage route and people have reported seeing the ghosts of monks walking along it. There are also mysterious old carvings in the rocks that line the route, some resembling the swirls of a labyrinth.

The protection and blessings of St Nectan According to legend, God gave Nectan the intuition to know when a storm was approaching. To warn sailors of the danger, he rang a silver bell that hung in a tall tower above his hermitage. If the ghostly sound of a bell is heard today, locals believe bad luck is on its way.

As well as being a protector, St Nectan was known for his wisdom. Before setting out on their quest to find the Holy Grail, the Knights of the Round Table came to Trethevy waterfall to seek the guidance of Nectan, as well as the blessing of his protection. In an act of submission to God, they each submerged themselves in the waterfall plunge pool, an act of faith that some pilgrims copy today.

But Nectan didn’t just receive visitors, he journeyed throughout Cornwall, Devon and Brittany in northern France, where he bestowed wisdom and gave riches to the poor.

It was on one of his journeys that St Nectan helped a farmer to find a stray beloved pig. In thanks, the farmer presented the hermit with a gift of two cows. Later, in 510, these cows were stolen when he was back in the Devonshire peninsula of Hartland. On 17 June, Nectan managed to track the two robbers down, but on trying to convert them, the thieves cut off his head.

Miraculously, instead of laying down dead, Nectan leant down and picked up his own head. He walked half a mile back to the well, where his hermitage was. It is said that where his blood fell, foxgloves sprouted and indeed many foxgloves do grow in the woods below Stoke.

Upon seeing the headless Nectan walking along with his own head in his hand, one of the criminals went insane. But the other, humbled by the miraculous sight, followed Nectan and, when he eventually did lay down dead, gave him a proper burial.

Many miracles are said to have taken place and blessings bestowed at St Nectan’s Well in Stoke, Hartland and at the waterfall of Trethevy, which is known as St Nectan’s Kieve.

It is also said that Nectan appeared in 937 on the eve of the Battle of Brunanburh. Many of the soldiers awaiting battle in the camp were afflicted with plague; one of them was a young man from Hartland. He called out to Nectan for help and the dead Saint appeared and touched the diseased parts of his body. He was cured. The King, Athelstan, questioned the young man, who told him to put his faith in the saint and he would be victorious. Athelstan won the battle and his troops’ plague vanished; in thanks, he donated riches to St Nectan’s Church.

Although St Nectan is not widely known today, he was much venerated during the Middle Ages and had a sizeable shrine in Hartland, until it was destroyed in the sixteenth century reformation. Today his popularity is growing again and the tradition of taking foxgloves to his shrine on 17 June has returned. (If you decide to take him a bunch, it’s best to wear gloves, as foxgloves are toxic!) The coastal sites in the southwest, associated with St Nectan, are well worth a visit; both beautiful and shrouded in an air of holy peace.

« St Philip Neri, Apostle of Joy
The Sweetness of Service »