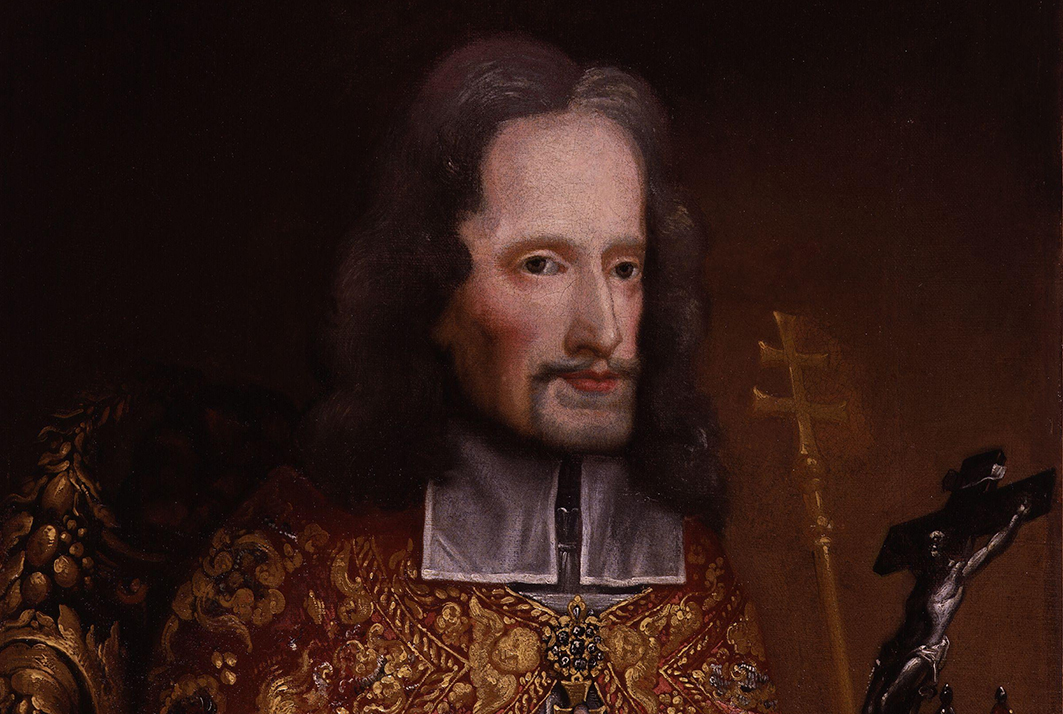 Oliver Plunkett was born into a wealthy and influential Catholic family on 1 November 1625 at Loughcrew, near Oldcastle in County Meath. Oliver was one of a family of five, with an elder brother, Edward, and three younger sisters, Catherine, Anne and Mary. The early years of Oliver’s life were relatively untroubled. He was protected, by virtue of his family connections, from the religious discrimination and deprivation that afflicted the vast majority of Irish people at that time. He received his early education from Dr Patrick Plunkett, a first cousin of Oliver’s mother. He was the first important formative influence on the life of Oliver, and it was on his advice that Oliver decided to study for the priesthood. In 1647, Oliver entered the Irish College in Rome.

Meanwhile in Ireland, the situation had deteriorated considerably. The momentary triumph of the Catholic cause in the 1640s was followed by the Cromwellian invasion and conquest. Death and cruel imprisonment were the lot of countless Catholics in towns and cities throughout Ireland, as Cromwell’s forces moved relentlessly across the land. Catholic landowners were expelled from their estates and replaced by English Protestants.

Among those who lost all their property was Oliver’s elder brother, who had inherited his father’s estate. Oliver Plunkett could not but be aware of the stark contrast between the splendour of the Church in Rome, where the magnificent St Peter’s Basilica had recently been completed, and the poverty of the persecuted Church in Ireland.

Like many others, after his ordination in 1654 he requested a dispensation for the vow taken by all the students of the Irish College in Rome to return to Ireland following their ordination to the priesthood. The necessary permission having been granted, Oliver was able to continue his studies at the University of Rome where, in due course, he obtained his doctorate in canon and civil law. In November 1657, he was appointed professor of theology at Propaganda College, a position he held until he was appointed Archbishop of Armagh and Primate of all Ireland by Pope Clement IX in 1669.

Oliver arrived in his new diocese in March 1670. Before his departure from Rome, a priest who had known Oliver well said to him: ‘Monsignor, you are now going to shed your blood for the Catholic faith.’ In the Catholic Church in Ireland at that time almost every diocese was without a bishop. Discipline among the clergy had broken down, and there were many disputes between the various religious orders. Catholic education and the celebration of the sacraments was forbidden by what subsequently became known as the penal laws. Catholic schools were practically non-existent in Ireland. In the archdiocese of Armagh, there were none.

By virtue of his education, family and class, Oliver Plunkett would undoubtedly have regarded himself as a natural leader of his people. The new Archbishop and Primate, however, did not receive a universal welcome in Ireland. It is a compliment to his leadership skills, diplomacy and tact that Oliver won over so many of the clergy during his relatively short active episcopate, which lasted nine years and nine months. Some of the clergy, both diocesan and religious, however, refused to be persuaded. A lesser man would, perhaps, have cowered in the face of so daunting a task as that which lay ahead of him. But Oliver was well prepared for his mission. With tenacity of spirit, by the grace of God and by his own strength, he began a three-pronged plan of action: the reform of the clergy; the establishment of Catholic education; and the administration of the sacraments, especially confirmation.

By 1673, his own records show that Oliver had personally confirmed 48,655 people! The provision of Catholic education was a high priority for the Archbishop. Within a year, he had established a school in Drogheda. The school was financed initially by Oliver himself and then by Rome. It included among its students Catholic youths, members of the leading Protestant families and ordained priests. Sadly, within four years the school was razed to the ground in a new wave of persecution.

The storm clouds were gathering for Archbishop Plunkett. In August 1672, a new viceroy, the Earl of Essex, was appointed to Ireland. By October, he had ordered the closure of all Catholic schools and religious houses, and banished all bishops and vicars general. Oliver decided not to comply, and was forced to go into hiding. In a letter dated 15 December 1673, Oliver wrote:

We would rather die from hunger and cold than abandon our flocks. It would be a shame if spiritual soldiers reared and trained in Rome should become hirelings. The thing that has caused me the greatest sorrow is to see the destruction of the schools I founded, after so much hard work had gone into them. We have so many talented young Catholics: What are we to do now?

In December 1679 Oliver was arrested and imprisoned in Dublin Castle. His imprisonment was, in his own words, a cause of ‘spiritual rejoicing’ for the Archbishop.

A Model for Peacemakers

Oliver Plunkett remained in prison in Ireland until October 1680, when he was transferred to Newgate Prison in London. His time in Newgate was one of immense suffering. From Ocotber 1680 until May 1681 he was kept in solitary confinement in an unheated cell. It proved to be a time of purification, from which he emerged with new strength and courage. In prison, it became clear to Oliver that the intention of his enemies was to find him guilty of treason and execute him.

During his final days on earth, Oliver showed his true strength of character. The charge against him was high treason. His trial commenced on 8 June 1681. It was a traesty of justice. He was accused of being a key player in the Popish Plot to stir up rebellion in Ireland. He was not allowed time to bring witnesses from Ireland, nor was he given any foreknowledge of the charges against him. The chief prosecution witnesses were three priests: Hugh Duffy and John McMoyer (Franciscans) and Edmund Murphy, a priest of his own diocese. Oliver was found guilty on perjured evidence and sentenced to death. When the foreman of the jury announced the verdict of guilty, Oliver replied: ‘Thanks be to God’. The sentence was carried out at Tyburn on 1 July 1681.

The last two weeks of Oliver’s life were a period of peace. He enjoyed the company of his faithful servant James McKenna, was allowed to celebrate Mass and received the sacrament of confession from a priest whom he trusted, Fr Taurus Corker. Fr Corker wrote movingly of Oliver’s last days:

He certainly knew God Almighty had chosen him for the crown and dignity of martyrdom, he continually studied how to divest himself of himself, and become more and more an entire, pleasing and perfect holocaust.

Oliver went peacefully to the place of his execution, where he delivered a most moving and inspiring speech. He professed his innocence of all the charges against him, and forgave his enemies, especially the priests who had testified against him.

And thus, Oliver became the last man to be martyred for the Catholic faith in England. Oliver Plunkett, bishop and martyr, was canonized by the Catholic Church in 1975. He stands as a powerful witness for peace and forgiveness in the turbulent times in which we live today. Wherever there are divisions between nations and Churches, St Oliver Plunkett invites all, by the witness of his life, especially in the loving forgiveness of his enemies, to put aside ancient enmities; to choose that which unites rather than that which divides and thereby to build a just and lasting peace between the nations of the world.