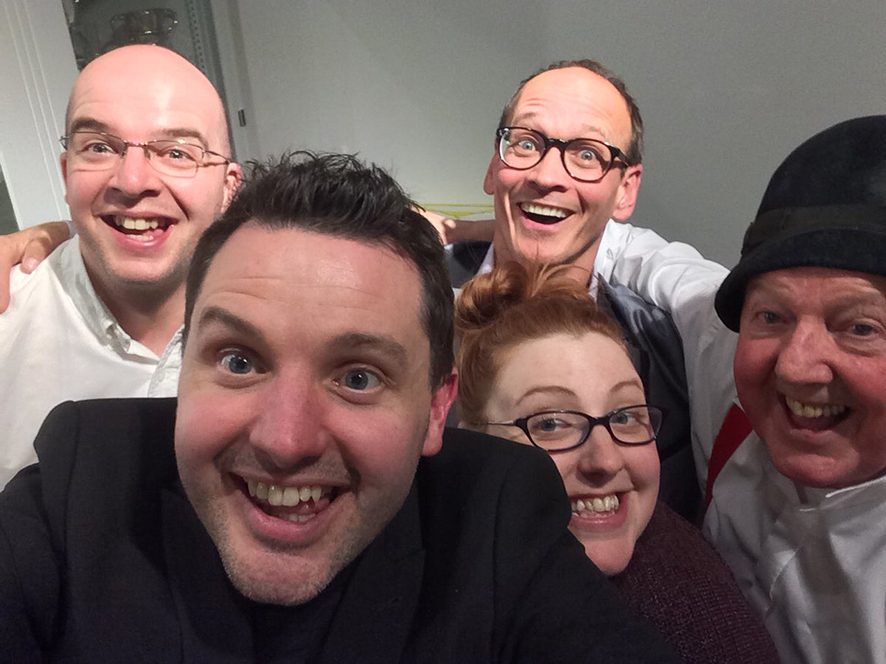 Physical healing is all well and good but, according to a new book edited by Fr Frankie Mulgrew, the real miracles happen inside our hearts and souls, every day. He talks to Joanna Moorhead about the messages of his book.

One of Fr Frankie Mulgrew’s favourite stories is about a fellow priest who, when he was first thinking about being ordained, worried he would never be good enough. But then, one day, he met Fr Frankie. ‘And he told me later: I thought well, if they’re taking him, they’ll take anyone!’

It’s a wonderfully self-deprecating tale, and Fr Frankie loves it because it means he can be honest from the very start of our conversation. ‘Who am I that God would call me to be a priest?’ he asks, as we chat over a coffee in central London. ‘But thankfully, as they say, God doesn’t call the qualified; instead, he qualifies the called.’

Fr Frankie, the son of the comedian Jimmy Cricket and a stand-up comedian himself, was ordained in 2013; and in the years since, he tells me, he’s become increasingly aware of miracles. ‘Say miracle and what people tend to think about are physical miracles – the person cured of a terrible illness at Lourdes, that sort of thing. But there’s another sort of miracle, and in a way it’s the most amazing sort of all: conversion, a conversion of the heart. And actually, that’s the biggest miracle of all: because our bodies are finite, but our souls are immortal. So a miracle of the soul, is a miracle that lasts forever.’

Being open to these miracles, says Fr Frankie, means we can find them all around us. One day in his work as a hospital chaplain, he had to come up with a Mass intention quickly – and decided he’d make it a prayer for a miracle. A few hours later, his pager went off: a seriously-ill man was asking to see a priest. ‘I walked into the room and this man was looking very ill, and very sad. And he said to me, I’m dying and I’ve never been baptised – will you baptise me? So of course I did; and I knew that conversion was a real miracle.’

So taken is Fr Frankie with the miracles of conversion that he’s put together a book of them: Miracles R Us, profits from which go to support the charity Mary’s Meals, brings together contributions from figures including L’Arche founder Jean Vanier, former gangsterJohn Pridmore, healing nun Sr Briege McKenna, Dominican Fr Timothy Radcliffe, Cardinal Vincent Nichols, former model Leah Barrow and many more. Each tells the story of their own personal conversion experience: Leah, for example, tells of her days in New York City at the peak of her career, when her face was plastered on the side of taxis and the billboards in Times Square. Her life was changed in the space of one photoshoot: she describes how she felt a growing sense of unease – with the fashions, with the objectification, with the vacuity of it all. In the end, she simply walked out, with the photographer calling behind her that if she did that, she‘d be a nobody. ‘All I could say was, ‘Do you promise?’.’ She returned to the Catholic faith of her childhood – ‘It is never a question of IF God will forgive you, it is only a question of WHEN – and we control the when’ – and is now an international speaker on the true place to find beauty in our lives.

In his contribution, John Pridmore describes how he began to hear God’s voice, and decided to go on retreat. Until this point, his idea of a retreat had been ‘to be on a beach with a nice girl, a spliff and a whiskey’. But the religious retreat gave him the impetus to go to confession; and that experience was life-changing. Our hearts, he says, ‘are like a glass window: on one side is God’s unconditional love pouring down every minute of every day, on the other side are all our sins, so we cannot see how much God loves us’. He now works full-time for the Church, based in a religious community in Ireland.

Sister Briege McKenna, who has been a Sister of St Clare since she was 15, has a worldwide preaching and healing ministry; in her contribution, she describes some of the miracles she has witnessed. One is the testimony of a man who was dying of cancer, and who decided on a whim to go along to one of her services. He prayed, went to confession; and the following morning he got a phone call offering him the chance to try an experimental drug for his cancer. He is now completely cured. And yet, says Sister Briege, physical healing isn’t the best kind; even better is when ‘there’s an opening to God who pours in his grace and that grace can either flood your body and physically heal you or it can flood your soul and prepare you for the Kingdom’.

Going to Mass is an everyday miracle in the life of every Catholic; but in his contribution, Cardinal Nichols describes a Mass in Jerusalem, at the Holy Sepulchre, when he was transported back to the day of the Resurrection. It was, he says, a moment of transformation: ‘never before had I seen so clearly what is there before us…’. The memory of that day, he explains, is always with him.

The contributors to his book, says Fr Frankie, are inspirational characters, and many have a special place in his heart. He wanted to share their stories; but also, he wanted to produce a book that would open up what he hopes are natural conversations about faith and ‘ordinary’ experiences of a relationship with God.

In his own life, he says it was always his dream to be a comedian; as well as the influence of his father there were other comedians, including Ken Dodd, a big friend of the family, who were important in his life. But after a period of depression, Fr Frankie met a priest who proved to be an inspiration – ‘I was aware of this great warmth,’ he explains, ‘that I later recognised was the Holy Spirit’. He went on to embrace his calling to the priesthood; but does he miss showbiz life? In some ways, he says, the answer is yes. ‘But God has blessed me with many friends who are involved with it, so I’m still in touch with that world,’ he says.

As a comedian, says Fr Frankie, he was able to transport people away from their worries and difficulties for the space of a show – for 40 minutes, perhaps an hour, they forgot their troubles and laughed at his jokes. ‘But what I realised was that as a priest you can take away the worries and anxieties for ever. God can take away the fear, and bring a peace and joy into your heart that’s there forever.’

At home, though, the jokes go on. ‘My dad says he’s glad there’s a priest in the family because it means he’ll get a cheap funeral.’ And then, as we wrap up our coffee, there’s a final laugh. Wearing a clerical collar means people turn to you at any moment, he says – especially during journeys. ‘I was in a taxi once and the driver asked me to hear his confession. So I said absolutely yes – but please, could you turn off the meter first?’

Miracles R Us: Supernatural Miracles in the Catholic Church, edited by Fr Frankie Mulgrew is available to order from our shop

« Singing her Dreams: The Pope’s Diva
The Pope of Hope Visits Ireland »