The Pope of Hope Visits Ireland 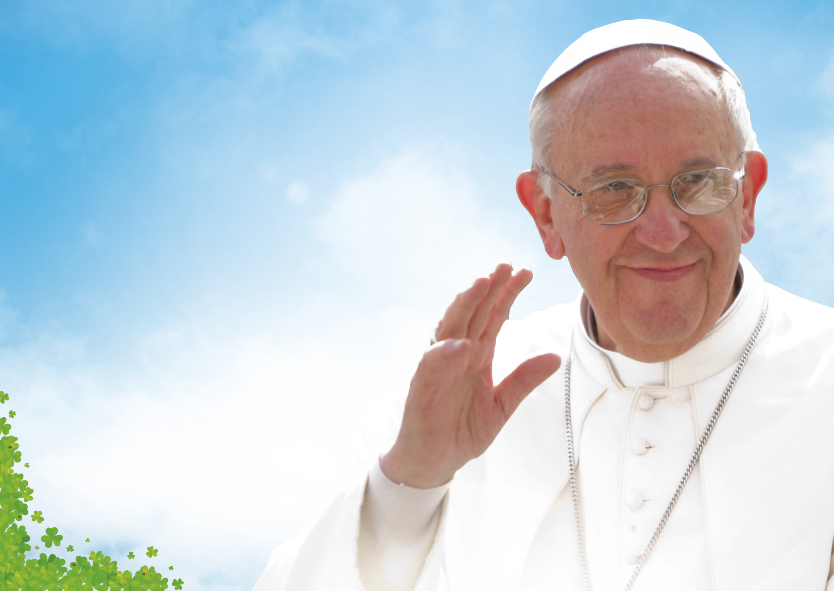 The Pope’s journey to Ireland this month comes at a tumultuous moment in the country’s history, and at a difficult time for the Church there. Joanna Moorhead spoke to three Catholics about the current climate in the country, and about what Francis’s visit will mean.

I was born and raised in Glasgow; I met my husband in the early sixties, and we were married in 1965. We weren’t well-off: in fact for our honeymoon we borrowed his sister’s house in Billingham, although things got better when, passing the bookie’s window, Bill noticed there was a horse called Printer running. He put some money on and Printer won: we got £12, and went to Paris instead!

Bill and I were happy in Scotland, but when we came on holiday to Ireland when our children were young, we realised how much we absolutely loved it. We bought some land in Westport, had a house built; and in 1983 we moved here permanently. We had four children by then: two were teenagers, and our younger children were four years old and ten days old.

All was well with our Irish move: but five years after we arrived here, Bill collapsed and died while playing golf. I was 47, a mother of four, a widow, and not in my own country: and the people of our community were incredible. I got amazing, unbelievable support. Funerals are extraordinary events in Ireland: everyone rallies round, you feel so cared-for, there’s a real sense of community.

So, 30 years later I’m still in this country and I still love it. I’ve always been a Catholic: it’s part of my identity, it’s who I am, it’s what I believe. Of course we’ve been through very difficult times here: of course I’m shocked and appalled by the bad things that have happened. But my mother used to say: your body can’t survive a week without bread, and your soul can’t survive a week without the Blessed Sacrament. And that’s what I believe: you can call it blind faith if you want, but I believe the Catholic Church in Ireland will get better, and we have to stay here to help it get better. I’ve got lots of friends who don’t go to Mass anymore and they’re no less Catholics than me: they still believe in the central elements of our faith, but they feel they can’t be part of the institution any longer.

My brother is a retired bishop, and I remember asking him once years ago, when I was a primary school teacher: what should I be trying to teach my children? And he said: you need to bring children up to realise that when they die they will be judged on how they treated others. That’s the important thing in all our lives. It’s how you live your life that matters.

Pope Francis is a very humble man, and even though so many here are disillusioned by the Church, many people here are much in favour of him. I’m sure he’s as sad as the rest of us about what’s been happening here, especially the two thirds majority in the recent abortion referendum. But he’s humble, and he’ll listen. He can show Ireland that God is about love; many people here grew up with a faith that made them terrified of God, the God who was always watching what they did, not the God of mercy and kindness. I’ve always known God loves me: everything in my faith begins with that knowledge.

The Pope’s visit centres on the World Meeting of Families, so we’ve got Catholics coming from all over the world to be part of that: I think people will be surprised by how international an event it’s going to be. So many people are coming from Europe, but they’re coming from much further afield as well: from Africa, America, South America, Canada, Australia, Asia. Lots of people have links with Ireland, and I think as it’s the summer many are planning trips that they combine with a holiday and the chance to reconnect with Irish family.

In terms of the feelings around the visit, I’d say this is all about hope: it’s about trying to bring hope and positivity to our Church and our country again. There’s a lot of respect in Ireland for Pope Francis: the Irish people are very warm and welcoming, and he himself is a human being, he’s not a distant figure, and he’s so with the people – with them, and for them. He has a different agenda: he wants to be seen with the poor people, he’s not above them but he’s beside them, in tune with them.

I remember Pope John Paul’s visit to Dublin in 1979. I remember walking there in such good spirits, and we all had to be there hours and hours in advance. There were a million people in Phoenix Park that day: this time, the most they’ll allow is 600,000.

I was newly married at the time, so I was there with my husband David. We went on to have three children, but sadly David died very suddenly nine years ago. Our youngest son was only 12 years old at the time: four weeks beforehand we’d been in the same church for his confirmation, and now we were there for David’s funeral. He’d been a fit, healthy man; he never smoked, and he played tennis and golf. So one great sadness to me this time is that David won’t be part of it.

I’ve volunteered to help with sorting out accommodation for people coming to Ireland for the visit and needing to stay with families here. It’s a huge job but it’s something I know a bit about: I did similar work for the Special Olympics which were held here in 2003, and then for the International Eucharistic Congress in 2012. The World Meeting of Families is at least ten times bigger, but I’m glad I’ve got experience of this sort of thing: and also, I’m confident that it’s all going to go well, that visitors to Ireland are going to love it here, and that we’re all going to enjoy having Francis in our country.

I think we’re past the lowest point in the difficulties now in Ireland. I know people have been very angry with the Church, and they have admitted their mistakes, and I think there has to be forgiveness on both sides. There is hope here for the future: we’re all learning from past mistakes, and I think Francis’s visit will really help with that.

I’d love to meet the Pope: but if there’s someone who would benefit from it more than me, I wouldn’t fight for my place. The Pope is Christ’s Vicar on earth, and he means the world to me – but he means that whether I’ve met him or not. I was lucky enough to be in Rome recently, and I got very close to him in St Peter’s Square.

Back in 1979 I was in Phoenix Park for John Paul, and it was a truly astonishing day: more than a million people, and I remember how the nun standing next to me fell to her knees when the helicopter came into view overhead.

Today’s Ireland is very different from the Ireland John Paul visited, and I worry about whether we’re going to get 600,000 people along to Phoenix Park on August 26. Having said that, I feel that on the day the people of Ireland will turn out for Francis, just as they would for Obama or Clinton or the Queen.

I have great sympathy for people who feel despondent about the current state of the Church in Ireland; I know the scandals have been unbelievable. But we must be honest: there’s no perfect society, and terrible things happen in all walks of life. Of course the Catholic Church should have been different, and it’s very sad that it wasn’t. I do feel, though, that some people use the problems the Church has had as an excuse to not go to Mass any more. I sometimes think that for many of them, shopping and football are the new religion.

But the Church has had its problems before, plenty of them. And there will always be a core of people here who will keep the faith, and the Pope’s visit will give them strength. So we must have faith, and continue to welcome people and to show them the best of Ireland.