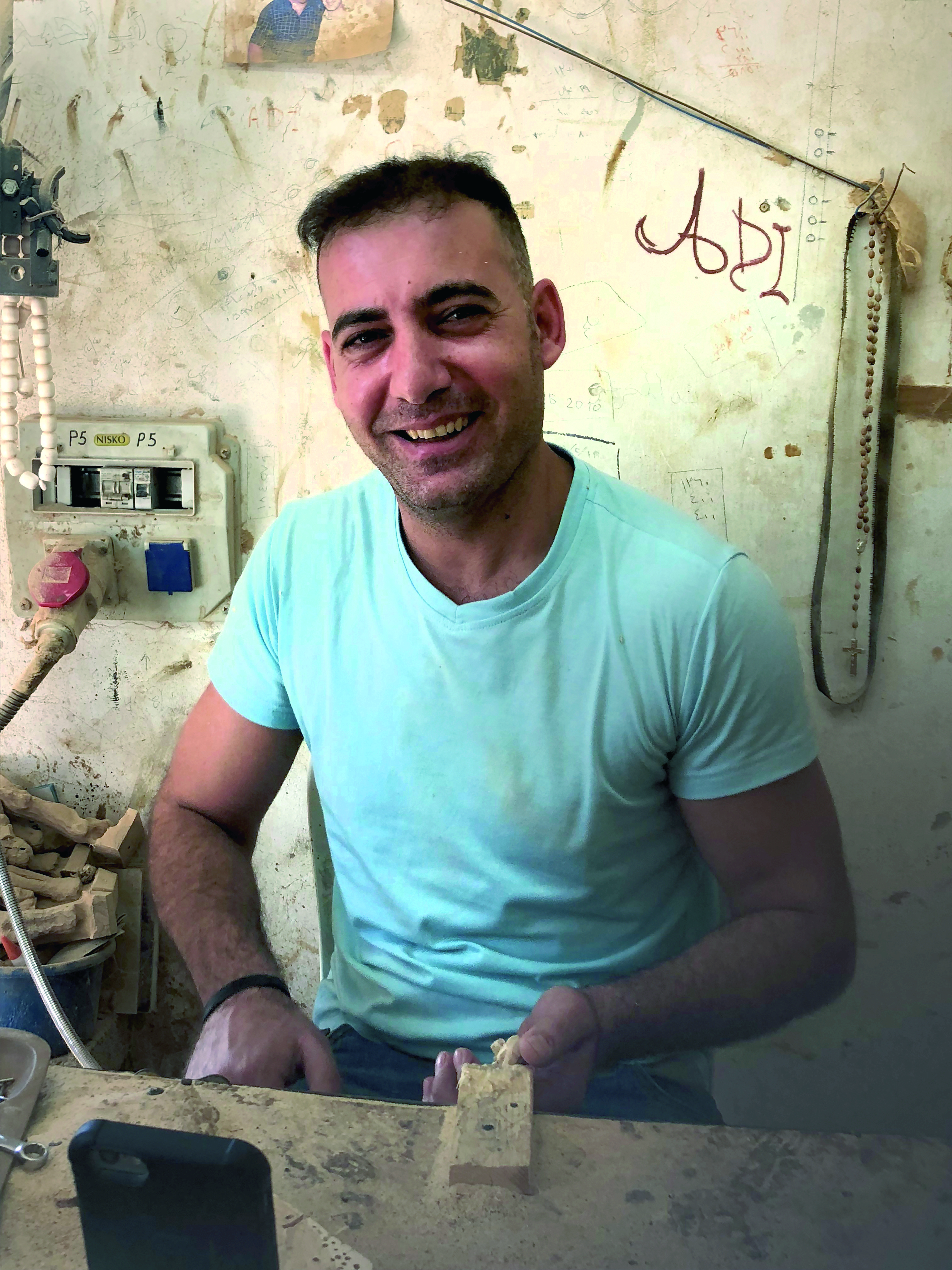 It’s the city where Christ was born 2018 years ago: but today the mood is far from peaceful, and the angels are Banksy creations on the ugly wall that separates the Israelis from the Palestinians. As Christmas approaches, Joanna Moorhead reports from Manger Square, Bethlehem.

Like Jesus, Hussam was born in Bethlehem. The importance of his home town gave him his first job: as a teenager, he worked part-time in a workshop making cribs from local olive wood.

Many Palestinian Christians in Bethlehem are employed in the workshops: but Hussam knew it wasn’t what he wanted to do forever. So he enrolled at university and did a course in film making. Today he’s 22, and on the brink of what should be his life. But, because of the continuing conflict between Israelis and Palestinians in his region, he’s stuck. And like a child caught up in his parents’ unhappy divorce, which has nothing to do with him, he wants no part of the animosity and anger. ‘I’m just not interested in politics,’ he tells me. ‘I want to get on with my life, like other young people the world over.’

Visit Bethlehem and you realise there are many ironies in the words we sing in what’s perhaps the most famous Christmas carol. Bethlehem is no longer little. It lies anything but still. And its sleeping is more likely to contain nightmares than dreamless sleep.

It is, though, a city teeming with important religious sites. Rachel’s tomb, where the wife of Jacob (of the ladder) and mother of Joseph (of the technicolour dreamcoat) is believed to be buried, is the third holiest site in Judaism. Also in the city are water cisterns hewn out of rock, said to be David’s Well. When he was battling the Philistines, David apparently cried out for water from the well of Bethlehem; but when he was brought a cup of it he refused to drink, saying it had been drawn from the well of his enemies. In today’s Bethlehem, his stubbornness seems oddly prescient.

From the New Testament, there’s the field where, 2018 years ago, a group of unsuspecting shepherds were ambushed by a throng of angels who invited them to be the first postnatal guests for a young couple who had just had their first baby; a boy whose story would change the history of the world. Down the road is the Milk Grotto Church, where according to legend Mary breastfed the infant Jesus, spilling some of her milk on to the floor and leaving it permanently whitened.

Church of the Nativity

And then there’s the most important site of all: the exact spot, now marked by an inlaid star on the floor of the crypt of the Church of the Nativity in Manger Square, where Jesus came into the world. In those days, of course, it was a rural stable: today it’s in the very centre of the city, and the area around it is festooned with coaches disembarking people from across the world who have come to stand here for a few moments, and to offer a silent prayer.

Bethlehem swirls with history, but here’s another irony: although its best-known moment from the past is all about peacefulness and joy, with angels’ voices floating down from heaven, the truth is that much of that history, like much of the city’s present, has been fraught with violence and difficulty. The first clue is in the church: it’s sandstone, and huge: but the only door is about four feet high, and visitors must bend down to get through it. It’s called ‘the door of humility’; but in truth its height has less to do with making pilgrims feel humble, and more to do with keeping it defended during the long wars of the crusades.

The city has long been at the heart of conflict, and today it’s in as difficult a moment as ever. It’s part of the West Bank, within the Palestinian territory of Israel: to come here, you must pass through an Israeli checkpoint, and my Israeli taxi driver is less than comfortable once we’re over the border. Other than taxi drivers, Israeli citizens are banned from visiting the Palestinian territories, and there are signs warning that they ‘risk death’ if they do so.

The situation in Bethlehem is intractable: to underline just how deadlocked the conflict is, the British artist Banksy has opened a ‘hotel’ here; in truth, it is more of an art gallery, although it does have rooms and some visitors do stay the night. But the other aim of Banksy’s place is indeed ambitious: several of its rooms make up a museum, which attempts to simplify what must be one of the most complicated conflicts in history, the protracted Israeli-Palestinian troubles. The museum traces the formal establishment of Israel in 1948, after which Jews from around the world immigrated into the area; and then the Six Day War of 1967, under which Israel captured East Jerusalem, the West Bank, Gaza, the Sinai and the Golan Heights, through the Yom Kippur War of 1973, the first Intifada in 1987, and the moment 25 years ago when the then Israeli prime minister Yitzhak Rabin shook hands with Yasser Arafat, chairman of the Palestine Liberation Organisation, on the White House lawn, and it looked – briefly – as though the two sides would at last be able to share the Holy Land in peace. That, alas, was not to be: Rabin was assassinated two years later, and tension and violence has wracked the area ever since. As it says in the Banksy museum at the end of this story: ‘If you’re not completely baffled, you don’t fully understand’.

The museum has plenty of evidence of the deadly debris of violence: tear gas cannisters; rubber bullets; fragments from bombed buildings; a child’s abandoned shoes, backpack, and pair of sunglasses. On the wall is a phone that rings incessantly: when you pick it up, you hear the voice of an Israeli intelligence officer who is calling to say your house is about to be bombed, and you have five minutes to get out. There’s a large picture on the wall of the Pope during his visit here in 2014: pointedly, he entered the Palestinian territory not via Jerusalem or Tel Aviv, but from Jordan, a tacit recognition of the state of Palestine. He stood at the wall that divides the Israeli land from the Palestinian territory, bowed his head and prayed, pressing his forehead to the graffitied concrete.

It is graffitied still, including with several original Banksy works; and the situation the Pope highlighted continues now much as it did four years ago. ‘We’re living in a jail here,’ says Adi Banu Ourah, 38, as he chisels away at a piece of olive wood to make the figure of Christ for the crib he’s working on. ‘We are stuck without opportunities and without being able to get out: it takes ages to get a visa to leave, so most of us are just trapped here. We can’t take our children to see the beach – there’s no seaside on the West Bank. You go for a walk in the town, and all you can see are the walls.’

Down the road Rani Qumsieh is in his workshop making crosses, some of which are inlaid with mother of pearl and others with tiny boxes of olive leaves, flour, incense and soil from Bethlehem. ‘I’ve done this work for 12 years,’ he tells me. ‘And my father did the same before me.’ He says he’d like to be able to go to Jerusalem to sell the goods he makes; that way, he says, he might be able to make a fair income. ‘There are many tourists in Jerusalem, and if I could get there I’d be able to do a lot better with my products,’ he says. ‘Of course, that’s impossible.’

But it’s Hussam, standing by the door as I head back to the church in Manger Square, whose plight most seems to sum up the tragedy of Bethlehem today. This town is all about a baby, the baby who was Christ: and it’s impossible to leave this teenager and the many others like him without praying that the message of hope that underpins everything here will somehow change the situation and bring about the miracle that’s needed so that Hussam and others like him can spread their wings, follow their dreams, and make the most of their God-given lives.

Supporting the Palestinians in Bethlehem

There are very few industries in Bethlehem, and Palestinian families like those of Adi and Rani depend on the sale of their olive wood products to support their partners and children.

Items carved from local wood include crucifixes, boxes and statues; but it’s perhaps the crib sets, coming from the place where Christ was born, that have the biggest emotional value for many people.

Alive Publishing supports the olive wood producers of Bethlehem by stocking their products: for a full selection, see www.alivepublishing.co.uk