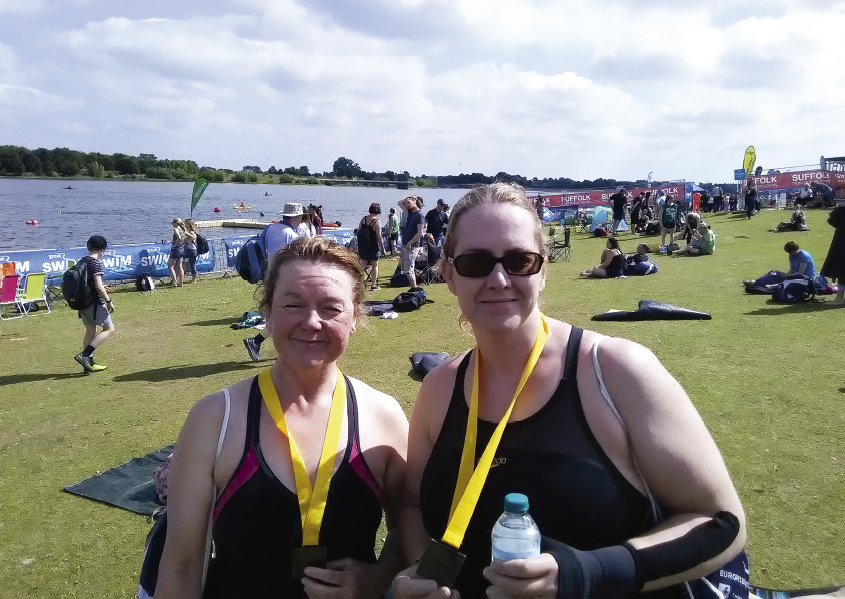 A few years ago, Nicky Clarke and Ingrid Kibble could barely manage a few lengths of their local pool. Now, they’re about to embark on a 10k swim in one of Britain’s most remote waterways, the River Spey in the Highlands of Scotland, to raise funds for Alive Publishing’s outreach work for prisoners.

So what transformed them into swimmers? Their tale, Nicky explains, centres on two things: friendship and determination. Both mothers of sons, the pair – who live near one another in Suffolk – met about ten years ago when Nicky’s son Sam and Ingrid’s son Felix, who are both now 19, were in a swimming club together. ‘We realised we had a lot in common, that we were similar personalities with the same sort of approach to life,’ says Ingrid, 54.

While their sons were ploughing up and down the pool, the two women found they enjoyed taking a dip, too. One day Ingrid decided she’d like to up her game as a swimmer, so she asked Sam – who was already showing signs of big talent, and went on to compete at national level championships – to give her some tips. As any swimmer will know, technique is everything – and Sam’s advice (‘I paid him in chocolate for his coaching,’ she remembers) was to prove life-changing. Ingrid was hooked: and before long, she and Nicky had hit on the idea of training to swim a mile.

‘You’re away from your phone, from your computer, no-one can reach you, and you’re in wonderful surroundings. It’s amazing – that first swim felt like a spiritual experience, an epiphany‘

A mile is a significant distance to swim: and there’s a world of a difference, Ingrid and Nicky quickly realised, between hurtling up and down an indoor pool, clocking up length after length, and doing the same swim in open water outdoors. ‘Sam encouraged us to try it, so we decided we’d enter the mile-long Great East Swim at Alton Water reservoir in Suffolk,’ remembers Nicky. Training for this swim, and then completing it in 2014, had them committed. ‘Swimming outside is tremendous – it’s a totally different experience from swimming in a pool,’ she says. ‘You’re in beautiful surroundings, and you can enjoy them and take them in from a different vantage-point. It’s as though everything to do with modern living just recedes for that time: you’re away from your phone, from your computer, no-one can reach you, and you’re in wonderful surroundings. It’s amazing – that first swim felt like a spiritual experience, an epiphany. We looked at one another and we both knew we’d seen the light: there would be no turning back, and we’d be doing lots more swims together.’

There was, though, a problem: Nicky suffered an injury to her arm that made swimming difficult, and pulling on a wetsuit impossible. She had to rely more on Ingrid – and the two women, already close friends, became closer still. ‘In many ways, Nicky’s injury spurred us on,’ says Ingrid. ‘It was something we had to overcome, and we’re both good at that. We’ve both had other difficulties to deal with in our lives – I also had to cope with illness, and major surgery – and it’s made us both aware that you can’t take anything for granted, and that there are times when you have to simply keep on going.’ At one point, after her operation, Ingrid was told it would be at least three months before she could attempt long-distance swimming again – but she and Nicky were already hoping to enter the River Dart 10k by then, and in the end they went ahead five weeks after Ingrid came out of hospital.

Entering for longer-distance swims, and training for them, has become a bigger and bigger focus in their lives: although both Nicky, who is a print buyer, and Ingrid, who runs a company that makes games components, work full time, they find time to train every weekday. ‘We do two hours in the gym on a Monday, one and a half on a Tuesday, we swim on Wednesday and we do gym again on Thursday and Friday,’ says Nicky. ‘Now we’re training for a big swim we’re determined to have a really strong core, and we’re training hard for that.’

Despite the joys of open water swimming, it’s not been without its challenges – especially for Ingrid, she admits. ‘We weren’t prepared for how dark the water is when you’re in a reservoir or on a river. It’s very different from swimming in the pool, or even in the sea. Often the water is pitch black, and I find it very scary going into the water – at first I’d have panic attacks. It can take me a while to get used to it.’

However inclement the weather, outdoor training swims always go ahead. ‘We make ourselves go – we’ve even been out in wind and gales,’ says Ingrid.

The next big challenge for Nicky and Ingrid, which they’re hoping Bible Alive readers and many others will sponsor them to do, is the River Spey 10k Whisky Swim which takes place in the northeast of Scotland in August. An important river for both salmon fishing and whisky production – hence the name of the swim – it’s the third longest and fastest-flowing river in Scotland. The swim starts in Kingussie in the Scottish Highlands and continues down towards Loch Insh, through the RSPB Insh Marshes nature reserve, and finishes at the watersports centre at Loch Insh.

‘It’s a beautiful part of the UK and we’re very much looking forward to it,’ says Nicky. ‘And we’re very proud to be raising money for prisoners. Like I imagine a lot of people, we hadn’t given much thought to prisoners or how they’re supported – and we’ve been shocked to discover how little is given to them in terms of books and reading material.’

And thinking of the people they’re going to help spurs them on, even when the going gets tough. ‘It’s great to have a goal, and it’s great to be able to think there are people there in prison who our swimming is going to benefit,’ says Ingrid.

They also hope they might inspire others. ‘So many people out there say they couldn’t do what we do, but they could,’ says Ingrid. ‘You just have to be determined, and you have to keep on going.’ Friendship, say both women, is a huge ingredient in the mix. ‘Being there for one another is very important,’ says Nicky. ‘There are so many times when you wouldn’t go out to train or do a practice swim, but we have to go to be there for the other one. So we do – and it’s changed both our lives.’

If you would like to donate towards Nicky and Ingrids Sponsored Swim for Prisoners please click the link here.

« Inside Story
St Gerard of Majella »