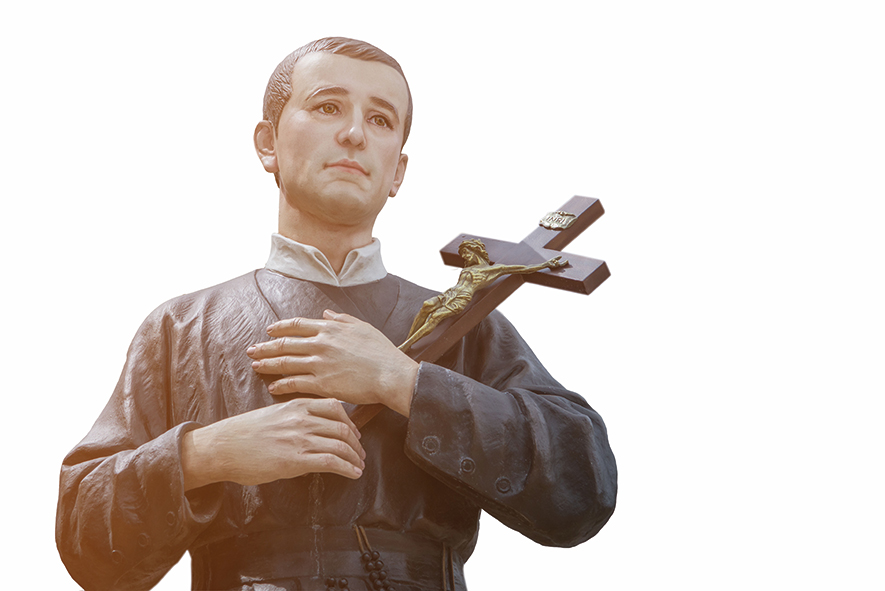 The soul, which is the immortal part of man which every person has within them, is the place where God is and is ready to be found. The course Gerard set on unchartered waters of human fraility were his Resolutions, a pact between himself and God. His first resolution was total conformity to the will of God, and his total obedience to his superiors. We often make resolutions and break them, Gerard made them and kept them. He found the will of God, as a tailor, a gardener, a sacristan and a door-keeper wore the coat of obedience exactly and absolutely and, through his penances and prayers, a soul committed to God, gradually emerged. There followed the great virtues of faith, hope and charity: faith, displayed by the marvellous miracles he won from God; hope, in the miraculous counsel he gave to men and women; and charity in his commitment to poor and suffering souls.

St Gerard was born on the 26th April 1726, in the city of Muro, Italy. From early childhood Gerard was dedicated to prayer, according to his two sisters Anna and Brigitta. When he was seven years old he would leave the family home and walk to La Raia, a place outside the city. He would return home with bread in his hands. When asked by his mother who gave him the bread, he replied ‘a little child’. According to Brigitta, when he was with the Redemptorists in the City of Illiceto, he said ‘Now I know who that small boy was that used to give me bread, it was Jesus’. His sister added, ‘If you come to Muro, and go to the same place, surely you will see him again’. Gerard replied ‘Now I see him everywhere’.

In August l748 two Redemptorist brothers were in Muro and Gerard approached them to ask about their rules. He was told ‘The Congregazione is not for you, because we eat very little, we sleep very little, our penances are hard, we observe silently, and we continually fast’. This would be sufficient to deter aspiring laymen from wishing to join such an austere Order, but Gerard exclaimed, ‘This is exactly what I want’. However Fr Cafaro, rector of the House of Illiceto, was with the Mission. He noticed the frail appearance of Gerard and decided he was unsuitable for the hard life of a lay brother. Gerard was informed. Gerard pleaded with the father to accept him as a lay brother and asked to be given a trial. Father Cafaro, touched by Gerard’s firmness of purpose, sent him to Illiceto with a note for the acting Superior of the House, which simply read ‘I send you a useless Brother.’ Armed with Fr Cafaro’s introducton he walked to the Redemptorist House in Illiceto. It became evident that the new brother was an extraordinary man. When Fr Cafaro returned to the house, he was told that the postulant was far from being useless. On the contrary, he was the greatest blessing to the whole community.

After Br Gerard’s profession, Fr Cafaro ceased to be Rector of Illiceto. He was succeeded by Fr Fiocchi, and it was during his term of office that the holy brother commenced a long series of projects. Some of the following events are astonishing in character. On returning to the Redemptorist House, he found a young man waiting for him at the entrance. The man suffered with a gangrenous leg. He had been brought to Illiceto by friends who had heard of Br Gerard’s holiness. When he saw the young man he could smell the gangrenous leg bound up with bandages. He knelt down by the crippled man and began to unbandage his leg. ‘What are you doing?’, the young man said. ‘Have confidence in God.’ Gerard said. He proceeded to suck all the poison out of the leg and rebandage it. The following morning, the young man unbandaged his leg and found it completely healed. The healing miracle was proclaimed throughout the town and the countryside.

In the meantime Archbishop Don Guiseppe Nickolai, prelate of the Archdiocese of Conza and a great benefactor, arrived at the House on 18th June 1755. Br Gerard noticed that one of the Archbishop‘s couriers was in deep spiritual trouble. Br Gerard took the courier into a room, and proceeded to reveal the man’s history. He was dressed as a priest but had been married, had left his wife and had a long relationship with another woman. He had deceived the Archbishop and had kept the secret from everyone. The courier flung himself at Gerard’s feet. Br Gerard told him to report to Fr Fiocci, and the Archbishop was informed of the situation.

Br Gerard left Curato and was walking back to the Illiceto. His cloak was patched, his habit old and worn. His appearance was that of a gypsy. He met a young man, who eyed the extraordinary dress of Br Gerard, and thought he might be a gypsy who had knowledge of hidden gold and silver. He accosted Br Gerard, saying ‘Perhaps, sir, you are a wizard’. ‘Perhaps I am, perhaps I am not’ was the reply. ‘If you are searching for treasure’, the young man continued, ‘I can help you.’ ‘But’ said Gerard, ‘are you sensible and courageous, having led a full life?’ ‘Certainly,’ replied the young man, and described a dissolute life of debauchery. ‘Well!’ exclaimed Br Gerard ‘You are the very man I am looking for. I will gladly share my treasure with you. But you must do whatever I tell you, and the treasure is yours’. They continued walking until they reached a forest. Br Gerard took off his cloak and spread it on the ground and asked the young man to stand on it. He was trembling with excitement. At any moment he would see the treasure. Br Gerard suddenly withdrew his crucifix from his jacket and held it up before the astonished eyes of the young man, and said ‘This is the treasure of all treasures’. The young man then burst into tears. Gerard took his hand and they walked to the house in Illeceto, where the young man made a full confession, and was thus reconciled to the Church.

The last ten days of Br Gerard’s life were on a bed of pain and suffering, but in perfect conformity to the divine will. When at last his weakness made vocal prayer difficult, he begged the lay brother say the Act of Resignation and the Act of Contrition. Br Gerard could follow them in his mind and heart. On the 12th October, three days before his death, he cried with joy, ‘I see our Blessed Father Latesse entering Heaven.’ The day after the vision, a distinguished ecclesiastic came to see him, together with his friend Don Joseph Salvatore, the physician from Oliveto. They brought with them a young peasant, who wanted to meet Br Gerard. When they arrived at the convent, all three went upstairs to the sick room. The young man did not go in, but stood shyly outside. However, the holy brother knew at once a stranger was outside and called him ‘Come into the room’. The young man was astonished to hear his name called, and entered the room. He saw in one corner a harp, an instrument he had never seen before. Br Gerard noticed his surprise with much amusement, and asked him to play something. Everyone laughed at this proposal, but Gerard insisted and told the boy to place his fingers on the harp, and to everyone’s amazement he began to play wonderful music. When asked how he was able to play the instrument, he said that his fingers seemed to obey some irresistable directions. Later Br Gerard received Holy Viaticum. He then asked for the corporal upon which the Blessed Sacrament had rested to be placed on his heart. It remained there.

Br Gerard knew that the next day the community would be rejoicing at the death of their holy brother. He asked the Brother to help him put on his habit. He said to the infirmarian, ‘I shall die tonight’. The exact moment of his death had been revealed to him. In the evening he asked for the time. On being told it was six o’clock, he knew he had just six hours to live. About half an hour before midnight, he asked for water to cool his throat. The infirmarian left the room and brought water back, but found Gerard facing towards the wall. He gave a deep sigh and the brother realised that death was approaching. The Father was summoned and arrived in time to give absolution to the holy Brother. He was in his thirtieth year and in the seventh year of his religious life. It was the feast of St Theresa in the year 1756 that Gerard died. His feast day is kept on the 16th October. The ceremony of his solemn Beatification took place on Septuagesima Sunday on January 29th 1893. After two miracles had been approved by the Pope, Br Gerard was canonised at St Peter’s in December 1903.

There are many extraordinary events and miracles in the life of St Gerard, and you can read about them in his biography. Gerard does not instruct you or me how to pray. But what he does ask of us is to spend time alone with God.