Welcoming the Newborn Christ in a Leper Colony 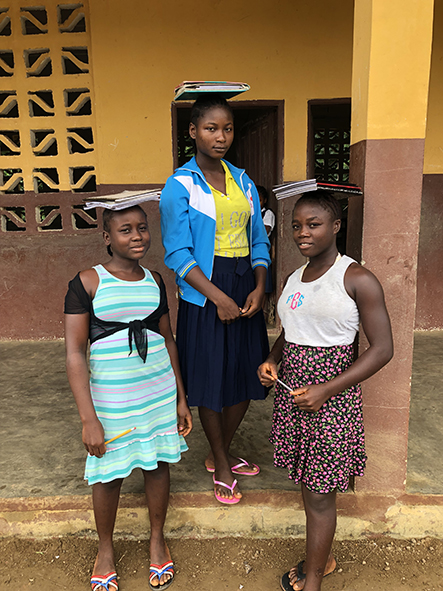 There’s much to be grateful for, as well as lots still to do, in a community of leprosy sufferers in the Liberian rainforest. Joanna Moorhead reports.

Smoke is curling from the fires outside the sand-coloured shacks of Massatine, and the women and children are carrying water on their heads from the pump, ready for the day ahead. It’s a scene repeated across Liberia, where the lush greenery of the rainforest brushes up against the pockets of eked-out human settlements. Massatine looks just like any other village in this west African nation: only it isn’t. Instead, it’s a community whose generic origins stretch back to Bible times and before: a leper colony.

Look closely, and you’ll notice the signs: some of the women stirring pots of porridge over the fires have missing fingers, and there are old men sitting on the porches who have swollen stumps where their feet and arms should be. Not everyone in Massatine has leprosy, but everyone knows someone who does, usually a relative. Take Emmanuel Logan, a smiley 32-year-old I chance upon in the clearing that serves as the village centre. His grandfather, he tells me, came to live here in the 1970s, and he lost most of his toes to the disease. Like many of the original inhabitants, who arrived here from the late 1960s on, Emmanuel’s grandpa was uprooted from another area of Liberia. ‘People with leprosy were moved here from across the country, because there was a stigma associated with the disease, and they wanted to keep the people who had it together in one place,’
explains Emmanuel.

It’s easy to see why they chose this spot: for sufferers of a disease tainted with fear and shame, Massatine is a perfect location. It’s miles from anywhere: to reach it, we’ve had a two-hour bumpy journey from Tubmanburg, the capital of Bomi County that lies about four hours north west of the capital, Liberia. It’s the rainy season right now, which means the potholes along the track are brimming with water: for several long, nail-biting moments when the wheels got stuck in the mud, we wondered whether we’d reach Massatine at all.

Now we’re here we can see that there are two prominent buildings: one is the church, the other the school. Both were built by the Catholic Church: the government resettled people with leprosy here, but there wasn’t much in the way of assistance after they arrived, and a mission picked up the pieces. Today both church and school are under the patronage of St Damien, who worked with leprosy sufferers before eventually succumbing to the disease himself. The church, reasonably smart on the outside with its mustard yellow paint, is threadbare within. There’s a plain cross behind the altar, a few wooden benches, and several sections of the ceiling are peeling away gently from the roof overhead.

No-one knows exactly when the priest will be here to celebrate Christmas Mass, Emmanuel tells me, but perhaps on Christmas Eve, or maybe a few days before, he will arrive, and the villagers will sweep the church’s dusty floor, tidy it up as best they can, and prepare for their Nativity celebrations. And despite the poverty, despite the deprivations of this tiny village (its inhabitants have no running water, no electricity, no shops and no transport system), there is much to celebrate. Because leprosy is on the wane: just 152 new cases in the whole of Liberia in 2017, compared with 355 the previous year and 662 in 2011. Emmanuel’s forebears may have lived under its shadow, but his four children – aged between one and 11 – will not. ‘In time I hope they will grow up and move away from here, to live out their lives in a place where leprosy is not even known,’ he tells me. And for the first time in history, that ambition will almost certainly be achieved.

Leprosy, mentioned several times in the Old Testament, and in the Gospel story of the leper cured of his disease by Christ, was declared officially eliminated by the World Health Organisation in 2000; but Liberia has been one of the geographical pockets where it has continued to exist, albeit on a decreasing scale. The civil war, which hit Liberia in several waves between 1980 and 2003, put much of its infrastructure, and especially its health service, back several decades; but today the people are rebuilding, and there is hope in the air. Emmanuel is not alone in seeing better times ahead for his children and their children. And beyond remaining healthy, education is the key to change.

As well as the church, the priests who founded St Damien’s built a school, and today there are 174 pupils, aged between four and 17, on its roll. The classrooms are basic, but they are full, and the air is full of the sound of children chanting numbers and the alphabet, as their teachers struggle to do the very best they can with the very least of resources – there are only desks, blackboards, and a few stubs
of chalk.

In large part, the children’s attendance is down to an open-sided shelter that stands on the edge of the reddish earth playground outside the classrooms. There, two women are already at work preparing rice and beans for the school dinner; and it’s that promise of food that has encouraged many of the youngsters here today. ‘Most of these children come from families where there isn’t enough food to go round,’ explains principal Chris Darblo. ‘But if the parents know their children will receive a meal, they make sure they come in. And once they’re here, we can teach them.’

The school dinners are provided by the UK-based charity Mary’s Meals, which was the brainchild of Scottish Catholic Magnus MacFarlane-Barrow. He began his aid work by driving trucks of provisions to war-torn Bosnia in the 1990s; later, when his efforts extended to Africa, he was struck by the words of a child called Edward who told him that what he and his friends needed was simple: food in their bellies, and the chance to go to school. Magnus realised one simple intervention could make the world of a difference, in impoverished communities across the planet: provide food at school, and a crucial first step towards real change has been achieved.

I’m visiting Liberia as a guest of Mary’s Meals, which today feeds more than 1,500,000 children across 18 countries, including 120,600 each day in Liberia. St Damien’s is just one of hundreds of schools served with regular supplies of rice, beans and porridge so volunteers like the women in the ‘kitchen’ here can prepare a nutritious meal for the kids. As the smell of lunch fills the air, I chat with Miatta Kallon, 12, who’s waiting for her food. Her parents have both been treated for leprosy – with the correct drugs, it can now be controlled – and two of her grandparents were also sufferers. But like Emmanuel’s children, she has every reason to look forward to a disease-free future, and she knows that education is the path to opportunities in the years ahead. When she’s not at school, she tells me, she helps her mother by collecting firewood and water. But when her chores are done she studies in the fading evening light; one day, she hopes to go to college to train to become a nurse. ‘Having a meal at school means I’ve got enough energy to get through the day,’ she says. ‘It makes all the difference to our lives.’

When the meal is ready the bell rings for the smallest children to get their food first; they run out of their classroom and form an impressively orderly queue for their lunch, which is ladled onto yellow plastic trays by the cooks. There is no dining room at St Damien’s; the children amble back across the yard, and sit on the dusty floor of the porch outside their classroom. There are plenty of big smiles and banter among the kids as they enjoy their beans and rice – and indeed, it looks very appetising. The children are clearly enjoying it very much, so I’m surprised to see one little girl, no more than four years old, who hasn’t touched hers. Then I notice something else: the other kids around her are sharing their meal with her. I carry on watching, and within ten minutes she’s heading off into the village, carrying her pot of food on her head. For this child, even the food at school is something that must be shared with other family members, perhaps elderly grandparents or even parents who are unable to work because
of leprosy.

That child is, though, in a small minority: almost all the other kids finish every scrap of food on their trays, and then head off for their afternoon classes. Mary’s Meals is transforming the future for the new generation of Massatine; when dinners are provided at schools like St Damien’s, enrolment goes up within a few months, and continues to rise. Combined with the advances in the treatment of leprosy, and the removal of its shadow from their future, these children really do have everything to live for, especially now the long years of civil war are over, and the country’s infrastructure is being restored. Though there is much still to pray for at the Christmas service in the church this December, there is much to be grateful for as well – and as the last generation of a leper colony, the inhabitants of Massatine know that better than anyone.