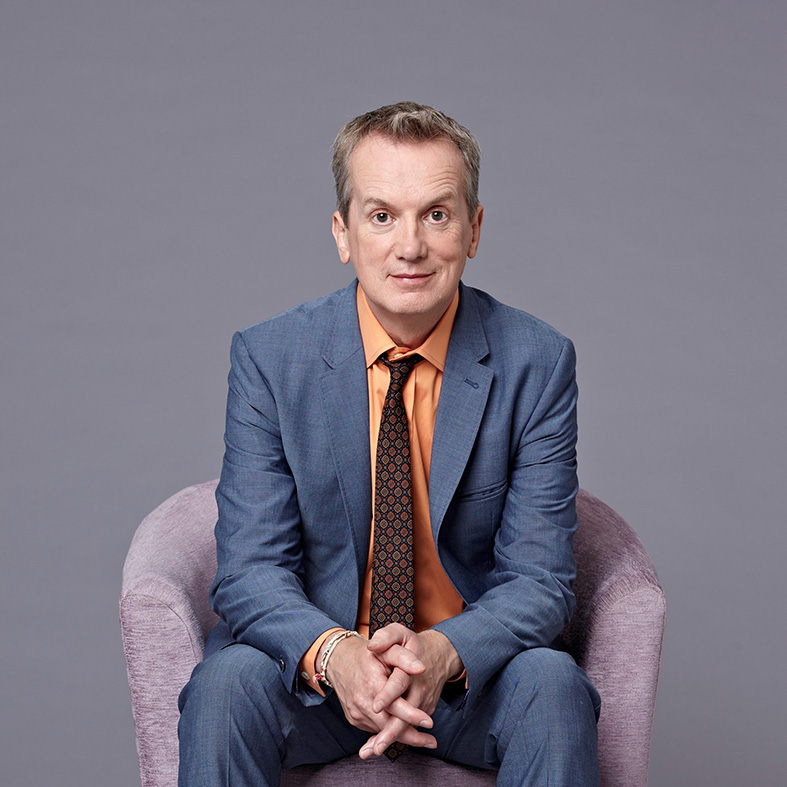 There are no jokes in the New Testament, says Frank Skinner. And as one of Britain’s foremost comedians, he certainly knows a gag when he sees one. But he doesn’t see any in the Bible: not because funny things didn’t happen, he thinks, but because the scribes who wrote the stories down chose not to record them. Skinner has a different take: he believes humour humanises us. That’s why he’s written his latest book, A Comedian’s Prayer Book – not, he jokes, a tome for religious comedians, since ‘the religious believers I’ve met among my fellow japesters would, if assembled just about fill a Vauxhall Corsa’.

Instead, his book is a searingly intimate conversation between him and God, in which Skinner lays himself bare and doesn’t hide his vulnerabilities. He’s been quoted as saying that it’s only in prayer that he feels he drops his guard in life completely – and you get a real honesty about who he is in the pages of his book. Sometimes he feels less a comedian, more an everyman: it could be called An Everyman’s Prayer Book. ‘You seem very far away, tonight,’ he writes at one point. ‘My prayers are trapped in my head, caught up in the whirl of earthliness. I suppose praying is like parking: you get as close as you can.’

Or there’s him pondering on the story where Jesus tells the wealthy young man that it’s easier for a rich man to get through the eye of a needle, than to enter heaven. ‘Now I’ve got a few bob in my pocket, I have to try harder,’ he writes. ‘Now there’s a pile of coins on one end of my life-scales, I have to realign the balance by loading some practical compassion on the other.’

A cradle Catholic and regular massgoer, there are many moments in the book when Skinner speaks Catholic-heart-to-Catholic-heart; as with this passage musing on the meaning of the Trinity. ‘I’m very confused. I’m guessing God is a sort of umbrella term, incorporating all three of you,’ he writes. ‘Anyway, my problem is I never know if I’m speaking to the Father, the Son or the Holy Spirit. Or indeed some combination of these, up there in Heaven, on a sort of conference call.’

In essence, this book is about Skinner – who’s 64, and who with his partner Cath has an eight-year-old son, Buzz (named after astronaut Buzz Aldrin), to whom the book is dedicated – putting his head above the parapet, and owning who he really is. Because, as he says, there aren’t many card-carrying Christians among top-flight comedians, and even more than that, there aren’t many openly Christian people in the entertainment world, period. He told one interviewer it had been easier for him to ‘come out’ as an alcoholic, which he did many years ago and has since been booze-free, than as a Christian. So Skinner is a rarity, not only in believing what he believes, but in being seen to believe what he believes.

Raised in West Bromwich in Staffordshire, he was one of four children, grew up in a council house, and went to a Catholic junior school. His father had been a footballer, and met his mother in a local pub after his club, Spennymoor United, played West Bromwich Albion in 1937; today, Skinner is one of West Brom’s highest-profile supporters. He’s happy to admit he’s an old-fashioned Catholic, and his book is underpinned by traditional beliefs. He’s a man raised in the sixties who sees God as a male figure: at one stage in the book he muses on people who have a woolly idea that they believe in ‘something’, and finds them wanting. They’re the people who say they don’t exactly believe in God, but that they do feel there’s a sort of Universal Will generating positive energy. He won’t be joining their ranks, he says, although he understands them. ‘I know there’s belief in there, somewhere. It just happens to be almost completely obscured by an ‘I don’t want people to think I’m strange’ stencil.’ But all the same, he acknowledges the need for simple, ‘child-faith’: sometimes, he says, he just wants to lie back in its warm bathwater. I think most of us can identify with that.

His honesty about Catholic conundrums includes exactly what happens after we die. Do we go to paradise immediately (if we’re judged good enough); and if so, what’s Judgement Day all about? He’s upfront about the fact that he’s not at all sure what he’s supposed to believe on this: and his prose is dripping with hints about how rich a vein for comedy he believes faith can be. ‘I assume the dead will, at your beckoning, come clambering up through the soil,’ he writes. ‘I guess they’ll be in a spiritual form too wispy to imagine. Maybe they’ll get back some temporary, non-decayed physicality, just for the big day. It’s so hard to regiment dust…’

Skinner’s love of the Bible comes through the book loud and clear: ‘a rattlingly good read’, he calls it, and in a BBC radio interview recently he spoke about how much he enjoyed it. ‘There are some boring bits but there’s some gripping stuff and if you are interested in poetry it’s a great read with lots of weirdness and madness,’ he said.

After university Skinner worked as an English lecturer before deciding to give stand-up comedy a try, and met with almost immediate success. His first gig was in 1987 and he appeared on TV a year later; by 1990, he was starring in a Channel 4 comedy show, and a year later he crowned that by winning the Perrier Award at the Edinburgh Fringe, beating Jack Dee and Eddie Izzard. More recently his show on Absolute Radio won three gold awards at the ARIAs, and he was inducted into the Radio Academy Hall of Fame in 2015. In 2020 two seasons of Frank Skinner’s Poetry Podcast launched with Absolute Radio, and enjoyed several weeks at the top of the arts podcast charts.

He’s had considerable success as a writer too, publishing Dispatches from the Sofa, a collection of columns he wrote for The Times, and he’s written two autobiographies, the first of which was the top-selling autobiography of 2002 and spent 46 weeks in the Sunday Times bestseller list. Next came How to Enjoy Poetry, which had him in his element of words and letters; he’s since starred in a Sky Arts series called Boswell’s and Johnson’s Scottish Road Trip, which traces Dr Johnson’s 1773 journey through Scotland and includes an episode filmed on Iona, where St Columba founded the beautiful abbey – Skinner says Iona ‘shines a torch into your dark corners’, and leaves saying he hopes he’ll always keep something of Iona in him.

He also muses revealingly on his own beliefs, and the role religion plays in his own life. ‘I don’t see religion as a handrail,’ he says. ‘I see it as a rope ladder that’s quite slippery and dangerous.’

« A Bible Adventure
The Joy of Ecological Conversion »