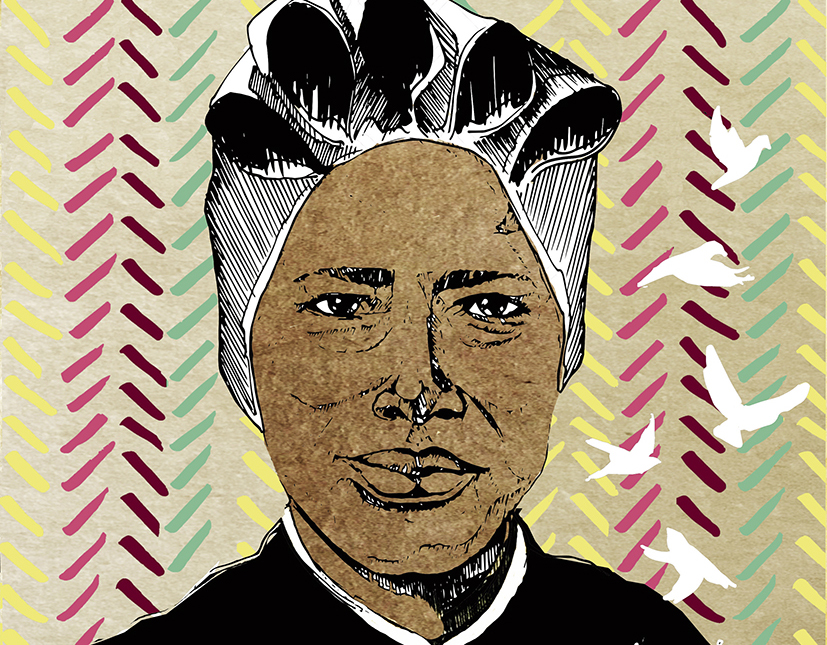 In his encyclical Spe salvi Benedict Emeritus XVI speaks of St Josephine Bakhita as a living witness of hope. He commends her as an example of hope in action from whom we can learn so much today.

St Josephine Bakhita was born in 1869 in Darfur, southern Sudan, East Africa. The first nine years of her life were lived within the warm embrace of her loving family. One fateful day, however, she stepped outside the safe boundary of her village and was kidnapped by marauding slave traders.

eeply traumatized and in shock she could not even remember who she was and where she was from. She was re-named ‘Bakhita’ by her kidnappers. This name, which means ‘the fortunate one’, would eventually prove to be profoundly providential, but not for many years to come, as she was immediately sold into forced
child labour.

Bakhita became a slave, a chattel owned, maltreated and abused by several masters. One of them, a general in the Turkish army, had her branded, which was a tortuous procedure involving 114 razor cuts on her breasts, arms and abdomen. Salt and flour were then rubbed into the cuts to ensure that the scars became a permanent seal of ownership. This process was so excruciating that Josephine lay immobilized in bed for weeks on end. During this period she was flogged daily with the result that she bled for many years.

Once she had recovered sufficiently to work, she was a hard-working and productive slave, and because of this was brought and sold like an animal to the highest bidder. Finally, in 1892, she was purchased by an Italian consul called Callisto Legnani. Remarkably for her, he and his family were kind to her and for the first time in her life she was treated with some respect and dignity. This experience had a profound impact on her and, when Mr Legnani had to move back to Italy because of work, she begged to go with him.

On arriving in Genoa Mr Legnani released Josephine into the domestic service of his friend Augusto Michieli. He and his family became very fond of Bakhita as she displayed great qualities of love, gentleness, service and kindness. They trusted and valued her so much that she became nanny to their daughter, Mimmina. Mr Michiele was an entrepreneur and businessman and he purchased a hotel in Suakin on the Red Sea which precipitated a move there. Since they did not wish to uproot their daughter or her nanny, they entrusted them into the care of the Canossian Sisters of the Institute of Catechumens in Venice (a branch of the Sisters of Charity).

Bakhita and Mimmina were enrolled into a religious instruction class, and this is where Bakhita, a pagan slave, came into direct contact with the Catholic faith. As she undertook the catechesis, she found that hearing about the truths of the Catholic faith had a profound impact on her. She began to come to know God whom she had experienced in her heart since she was a child. She said of this time, ‘Seeing the sun, the moon and the stars, I said to myself: who could be the Master of these beautiful things? And I felt a great desire to see him, to know him and to pay him homage.’

Against this backdrop of emerging faith and a profound desire to be baptized Bakhita received the news that the Michielis and their daughter were to return to the Sudan. Her choices were stark – if she returned, she knew that they would take care of her and she stood a chance of finding her family again. If she left Italy, however, her catechesis would stop, as would her relationship with the Canossian Sisters, and more than anything else she wanted to be baptized. Bakhita refused to go to the Sudan, asking instead that her legal status be scrutinized by a tribunal. The judge ruled that Sudan had, in fact, enacted a law forbidding slavery just prior to her birth, and therefore she was a free citizen and not a slave at all. Italian law protected her freedom of choice and with firm resolve she declined to go to the Sudan and chose to stay with the Canossian Sisters.

Bakhita completed her catechumenate and was baptized, received Holy Communion and was confirmed on 9 January 1890. At her baptism she received the name Josephine. After her baptism she could be frequently seen kissing the baptismal font, saying, ‘Here, I became a daughter of God.’ We can learn so much from St Josephine concerning baptism, which for her was the source of great and ongoing joy: ‘I received the sacrament of baptism with such joy that only angels could describe.’

A few years later Josephine experienced a call to enter the religious life and joined the Institute of St Magdalene of Canossa, taking her final vows on 8 December 1896. She always referred to Jesus as ‘the Master’. From that time on she dedicated herself to serving God, embracing the humble tasks of cooking, sewing, embroidery, caring for the chapel and being the doorkeeper to the convent. She had a lively and vibrant interior life and a great sense of God’s love for her, testifying: ‘I have given everything to my Master: He will take care of me…The best thing for us is not what we consider best, but what the Lord wants of us!’

Sr Josephine Bakhita had nothing but compassion and love for those who had abused her or treated her badly. She said, ‘If I were to meet the slave-traders who kidnapped me and even those who tortured me, I would kneel and kiss their hands, for if that did not happen, I would not be a Christian and Religious today…The Lord has loved me so much: we must love everyone…we must be compassionate!’ She also had a profound sense of the call of her vocation to share her faith, give witness and evangelize: ‘O Lord, if I could fly to my people and tell them of your Goodness at the top of my voice: oh, how many souls would be won!’ She was full of joy and happiness as she lived out her vocation. She would often bless the children who attended the Canossian schools, saying, ‘Be good, love the Lord, pray for those who do not know him. What a great grace it is to know God!’

Towards the end of her life Sr Josephine Bakhita experienced long and painful illnesses. On her sick-bed she never complained, but simply offered up her suffering with a smile and the words, ‘As the Master desires’. Once in terrible suffering and delirious she said to a sister who was nursing her: ‘Please, loosen the chains…they are heavy!’ As she lay dying on 8 February 1947, her last words were: ‘Our Lady! Our Lady!’ News of her death spread like wild fire and people came from far and wide to her convent to see her one last time and ask for her intercession and blessing.

She was beatified by St Pope John Paul II on 17 May 1992 and only eight years later, during the Great Jubilee Year, on 1 October he made her a saint.

« Advent – An Encounter with Jesus the Eternal Word