The Gentleman Bandit Devoted to Jesus 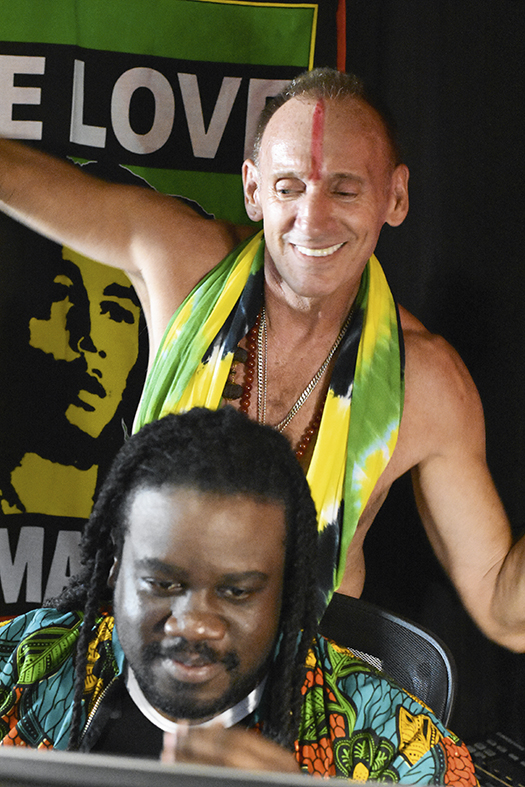 After years on the run, Gregory David Roberts was returned to prison, wrote a bestseller, and has now released an album. He tells Joanna Moorhead his extraordinary story.

He’s spent years in prison; he was a fugitive on the run for a decade; he’s a best-selling author; and now he’s a musician, with a new album out. But what most excites and animates Gregory David Roberts during our one and a half hour Zoom call is the individual he believes was simply ‘the best’ person in history.

‘You can’t beat him,’ says Roberts. ‘No-one has ever beaten Jesus. For me, he’s the only historical hero. Whoever you are, you’ve got to love Jesus. This guy was so smart, so wise, so kind. Forget the miracles – the biggest miracles were the words he said. The three most revolutionary words ever uttered by any human being were uttered by Jesus, and they’ve never been bettered. ‘Love your enemies.’ The day we do that will be the day we don’t have enemies any more.’

Roberts, who’s 68 and looks like a New Age hippy, was raised Catholic in Australia; and it’s hard not to think, with his passionate championing of Christ, that he’d have been a brilliant priest. Which is what he thought when he was a youngster. ‘I ran away to the cathedral in Melbourne,’ he tells me. ‘I spoke to a senior priest and told him I wanted to be a priest. He asked me why, and listened while I explained. And then he said, it has to be to serve the divine, and the community – but you want to become a priest because you want to escape your family, and that’s not the right reason. He was the first person to help me understand that sometimes an impulse comes from another direction and is a signal or sign that should lead you in a different direction.’

The priest’s wisdom was a breakthrough for Roberts, who returned to his family and his Christian Brothers school, although home life was tough. ‘My parents were good people but they were desperately unhappy with one another. The feeling of unhappiness at home was choking.’

Roberts believed his future lay in starting his own family: he and his girlfriend were married when he was just 18, and his daughter was born a year later. He was hard-working and determined to make a success of his life: but when the marriage broke up after a few years, he lost custody of his daughter; and that changed everything.

‘The night I lost custody of her was the night I took heroin for the first time,’ he tells me. ‘I was young and immature and I didn’t know what to do. Now I know what I should have done: worked hard, saved money, because eventually that child will come to find you.’

Instead, Roberts embarked on a career in crime, to pay for his drug habit. ‘They called me the gentleman bandit,’ he says. But even gentlemen bandits get caught, and he was: and the sentence was stiff, 23 years with a 16-year minimum. As a high-profile left-wing activist, working for better rights for aboriginal people and for women, he says he was made an example of. ‘My great-great-grandfather had been transported from Ireland, and opted to stay in Australia after serving his sentence – he went on to design St Francis’ Church in Melbourne. He bought some land, established the family. I was the first person in six generations of our family to commit a crime.’

But prison wasn’t survivable. Roberts was treated so badly, he says, that if he’d stayed he’d have ended up dying. ‘I’d been in the punishment block and I knew if I had to go back there I’d die.’ So escape, though risky in the extreme, felt like the only option. ‘I went over the front gate at 1pm: it was the only place they weren’t watching, because they didn’t think anyone would be crazy enough to do that. If I’d been seen, I’d have been shot dead.’

He wasn’t seen, and he got away – travelling first to New Zealand, then to India, and also to Europe. Roberts’ extraordinary adventures on the run are the basis for his 2003 novel Shantaram, a 933-word tome that traces in meticulous detail his life in, amongst other places, the Bombay slum where he lived and where he established a free health clinic. It’s shot through with wisdom and compassion for those he encounters, and Roberts believes its enormous success came down to the fact that the central character is open to whatever the world throws at him, and doesn’t judge anyone. The book sold more than six million copies, has been translated into 41 languages, and retails in more than 116 countries.

To get around while he was a fugitive, Roberts turned to passport forgery. ‘But eventually, I got lazy,’ he says. Although he knew the dangers of using a forged passport twice, he did – and paid the price. ‘I was arrested in Germany; I fought the extradition, was extradited after 19 months and spent two years in solitary confinement in Australia as a punishment for escaping.’

The temptation was to do what he says many prisoners do: to decide to bide his time. ‘The jail mentality is ‘let’s hope the clock turns fast, that I don’t get killed, and then I can get out and live my life. But no: this is my life: right here, right now. I thought, I could die tomorrow. I can’t wait for my life to begin.’

In solitary confinement, he explains, the only contact with other prisoners is to call out to them from your cell. There was often shouting and anger; and Roberts would call out and tell people to chill, to relax. One day he offered to teach meditation techniques to a fellow prisoner who was having a hard time; soon, others were asking to join in. ‘And then the governor called to me and said, this Indian mumbo jumbo you’re doing: keep doing it. Since it started there’s been no self-mutilation, no suicide attempts, and no assaults on my officers.’ Roberts said that sure, he’d carry on; whereupon the governor said: ‘Is there anything I can do for you?’

It could have been the end of everything; instead, it was a new beginning. ‘If you want to know what solitude is like, let me tell you,’ he says. ‘You spend the first year whinging and moaning, you blame everything rather than yourself. But then came a turning point. I thought, wait a minute. I’ve got another year in here: I’ve got to find another way.’ That other way meant accepting responsibility for his own life, and deciding that from this moment on he’d shape his own destiny.

When Roberts replied that he wanted to write, and needed a pen and paper, the governor had to decide whether to take a risk – pens weren’t allowed, as there was a risk they’d be turned into weapons. He said he’d trust Roberts – and the result was Shantaram, a book he wrote three times – the first two times the manuscript was destroyed by his jailers. When it was eventually published, after his release, one of the prison guards responsible came to his book signing. ‘He was sobbing, saying how sorry he was; and I hugged him and said “don’t worry – it’s a better book now.”’

Now based in Jamaica, the multi-talented Roberts has now turned his attention to music, and his new album Love and Faith is infused with not only his impressive and multi-layered approach to life, but also his Catholic heritage. When he sings ‘the chips are down and the stakes are high,’ you know he knows what he’s talking about; and when the backing singers intone the words ‘deliver me from evil and not into temptation,’ you know exactly where it came from.

The songs on Love and Faith are the fruits of the consolation that music brought him in the midst of suffering. ‘They come from the constant experience of my life that with love and faith, anything is possible,’ he says.

‘Music saved me. It has been an unfailing inspiration to keep going and never give up.’

Deliver Me, Gregory David Roberts, is out now and available on Spotify