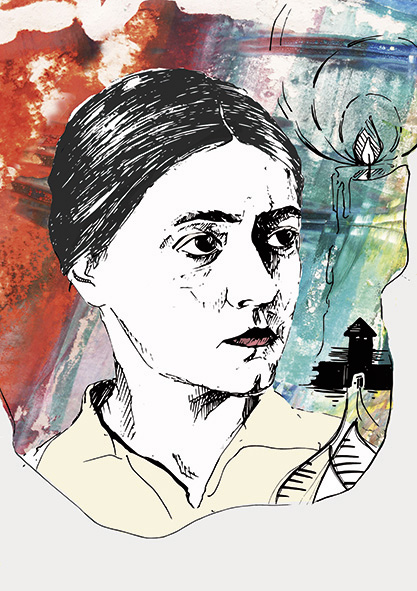 Edith was born on 12 October 1891 in Breslau, Germany, now Wroclaw, Poland. Edith was very dear to her mother, as her birth on Yom Kippur of that year was a sign to her mother of God’s blessing upon the child. The youngest of seven children in a Jewish family, Edith lost her father at the age of two when he collapsed on a business trip. Edith’s mother, Auguste, decided to carry on the family lumber business from her home. The Steins were practising Jews but not entirely orthodox; the older children attended the synagogue with their mother on high holy days but their business remained open on Saturdays. In the home, prayers were offered in German, not Hebrew. Edith was an exceptional student and thrived on the humanities, especially history and literature. After high school she spent two years at the university of Breslau where she discovered the writings of Edmund Husserl in the second volume of Logical Investigation. (Husserl would found the school of philosophy called phenomenology). She had an insatiable desire to search for the truth, and found illumination in Husserl’s writings on the nature of the human person and being. She transferred to the university of Göttingen in 1913 to study under him. At Göttingen she began to explore the spiritual dimension to human existence and was greatly influenced by professors Adolph Reinach and Max Scheler. During her adolescence, Edith stopped believing in God and became an atheist. God used her years at Gottingen to reignite the spark of faith. In 1915, Edith interrupted her studies in order to study to serve as a Red Cross volunteer during World War I. After her return, she briefly taught in Breslau. Edith received her doctorate, ‘summa cum laude’ in August 1916 aged twenty-five. Husserl had been offered the phenomenology chair at Freiburg University and invited Edith to join him as his first assistant. Edith taught his first-year philosophy students. There she wrote Psychic Causality and The Individual and the Individual and the Community, shortly followed by The State.

In late 1917, Edith learned that her dear friend Adolph Reinach had died during military action. When she went to comfort his widow, Edith found her to be a woman of incredible interior strength. Anna Reinach shared that her faith in Jesus was the reason for her peace. Edith possessed a deep empathy, and this sensitivity to another’s experience enabled her to receive a knowledge of the mystery of the cross. The visit left a mark on Edith, and she identified this moment as the reason for her conversion to the Catholic faith. Edith did not convert immediately. While on holiday in the summer of 1921 she picked up and read the Autobiography of St Teresa of Avila and read it overnight in one sitting. Immediately she knew that she was to become a Catholic. She recognized the truth Teresa wrote about, and perceived the meaning of the saint’s vocation. The cross of Christ compelled Edith from that day forward. Her life became a reflection of humility and surrender. She wanted to lead a contemplative life despite living a rich, busy and full professional academic life. After her conversion to Catholicism, she resigned her post at the university and taught for ten years at a girls’ Catholic school in Speyer. During these years, she wrote and lectured on education and women and became the voice of Catholic feminism, giving lectures throughout Europe from 1928-1932. These lectures are the basis of her work, ‘Essays on Women.’ Edith’s intellectual contributions during these years drew upon her knowledge of phenomenology and Christian philosophy. She translated St Thomas Aquinas’ De veritate into German. This work included a phenomenological commentary as well as a translation. Edith was invited to establish an education program for women at the German Institute for Scientific Pedagogy in 1932. Her lecturer post there was shortened as a result of the Nazi policies of persecuting the Jews in 1933. Jews lost the right to vote and to publish their work. Edith was sure that what began as persecution of the Jews would lead to a persecution of Catholics also.

By the spring of 1933 she understood that the destiny of the Jewish people was her own. Her departure from the academic world gave her the opportunity to enter Carmel. At the end of 1933, after much fervent prayer, she made her decision to become a Carmelite nun. Her mother experienced great sorrow at the news because she understood it as her relinquishing her Jewishness. Edith assured her mother that although a Catholic nun she remained a Jewess and derived great comfort from her mother’s memoirs and her memories of growing up in a Jewish household producing the work, Life in a Jewish family 1891-1916. Aged 42, Edith entered the Carmelite convent in Cologne in 1933. She entered Carmel with a visceral sense that the only way to save the Jews, the Nazis, and her nation, was through a life of prayer and sacrifice. When she prayed for mercy, she asked God to receive her life not only for her own Jewish people but also for their oppressors. She believed that we are all our brothers’ and sisters’ keepers by virtue of being human beings. Edith received the name St Teresa Benedicta of the Cross at her investiture in April 1934. She continued her study in Carmel, finishing her masterpiece Finite and Eternal Being. The Carmelite Order invited her to write the Science of the Life of the Cross, a phenomenological study of St John of the Cross. For Edith, the cross wasn’t merely a theological position but rather a lived experience, and she embraced it as the fulfilment of the Jewish atonement, seeing the cross as the unifying point of Judaism and Christianity. She studied the scriptures in Hebrew and prayed them as a faithful Jew. Her Catholic faith was lived through the prism of her Jewishness, and on her fiftieth birthday, her sister nuns wrote and prepared a play based on characters from the Old Testament. As the Nazi machine swept through Germany rounding up Jews, the sisters arranged for Edith to be transferred to a convent in Echt, Holland, on 31 December 1938. Her sister Rosa, who was baptized after her mother’s death, joined her in the convent in Echt, where she served as a porter. On 26 July 1942, the Dutch bishops published a pastoral letter condemning the deportation of Jews. The Nazis didn’t take kindly to this kind of criticism and retaliated, ordering the arrest of all Catholics of Jewish descent. Edith and Rosa were among them, initially taken to camps in Holland where their witness attracted the attention of a sympathetic guard who said he would help her and Rosa escape. She declined saying: ‘If somebody intervened at this point and took away our chance to share in the fate of our brothers and sisters, that would be utter annihilation..’ The Nazis finally moved Edith and Rose to the death camp Auschwitz where they were murdered together in the gas chambers. Edith comforted Rosa with the words, ‘Let us go for our people.’ When she was beatified Pope John Paul II described her as ‘a daughter of Israel who, as a Catholic during Nazi persecution, remained faithful to the crucified Lord and, as a Jew, to her people in loving faithfulness.’; she was declared a saint on 11 October 1998. ■

The Gentleman Bandit Devoted to Jesus