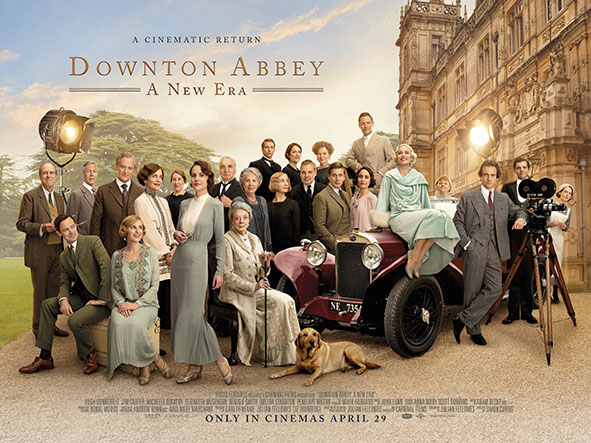 Lord Grantham, Lady Mary, Carson and the inimitable Lady Violet are back, this time in the cinema, in the new Downton movie. Joanna Moorhead catches up with the man who started it all, Catholic writer Julian Fellowes.

Back in 2010, at a fundraiser in Sussex, I met the actress Maggie Smith, who told me she was rehearsing for a new TV series called Downton Abbey. ‘It’s going to be big,’ she said. But how big, Maggie could never have imagined. And nor could the series’ creator, Julian Fellowes.

‘I thought we had a good show but the accepted truth at that time was that period drama was dead,’ he tells me, on a Zoom link from his home in Dorset. ‘I didn’t believe that, I thought there was a market for it if we could get the show right.’ The early indications were good, and early viewing figures were strong. ‘But you’d have had to be mad to anticipate the level of success it went on to have. By a year later, when the show was broadcast in the US and elsewhere in the world, it was already an enormous phenomenon – the most successful TV show ever produced in Britain, I think.’

Within a short time of being aired, Downton had what Fellowes calls ‘entered the conversation…we became an adjective, it was: ‘Where do you think you are, Downton Abbey?’. I remember Jim Carter was once bicycling in the Himalayas and someone called out, ‘Mr Carson!’.’

Fellowes says he’s always hugely enjoyed the great outpouring of affection for Downton; and so too do the cast, certainly if their loyalty to the show is anything to go by. ‘They certainly kept coming back,’ he says. The new movie, Downton Abbey: A New Era, reunites the original cast. ‘There’s a reunion feeling at the start of the new movie,’ says Fellowes. ‘We’re all back again at Highclere in the Great Hall, everyone in costume.’

Now 72, and a life peer, Julian was born into an upper-class family then living in Cairo. They were Anglicans; but his grandmother, who had lost her husband in the trenches in World War I, married again, to a Catholic whose brother went on to be abbot of Ampleforth. When his grandmother converted, Julian explains, his father – then aged 11 – did the same. And when Julian came along, sending him to school at Ampleforth, along with his three brothers, was a no-brainer.

He didn’t adore his years there, he confesses – but it seems it was less to do with the Benedictine-run public school, and more to do with his own character. He liked being a child, he says, and he liked being an adult – but the bit in the middle didn’t suit him. He didn’t enjoy sport (Ampleforth is a sporty school, set in the rolling hills of North Yorkshire); and early on in his time there, when he was 11, he actually ran away. ‘I got to Grantham, a town I later used for Robert’s title [Lord Grantham is the central character in Downton Abbey], where I was picked up by the police, taken off the train, held in the station mistress’s office, and put back on the post train going north. It was quite an adventure.’

At Ampleforth, his first housemaster was Basil Hume, later cardinal; Julian holds him in great esteem
(‘a marvellous man’) and theirs was a friendship that lasted way beyond school, and he went on meeting him for tea until the end of his life. ‘I felt the gift of Ampleforth was to put spirituality into your normal, everyday life, and not make it a Sunday event.’

He’s often asked, he says, why Downton has been such an extraordinary success; and I suspect, coming from a family whose men were also Ampleforth-educated, that the school has more than a smidgeon to do with it. There’s an understated quality in the Ampleforth tradition, a feeling that most people are good at heart, and despite the snobbery for which the school has sometimes been known (and there certainly was a snobby side to Ampleforth), there was also an egalitarianism, a core belief that character mattered more than status.

‘I think one of the things we did right [in the series] was that the characters are decent people,’ he says. ‘They’re not all nice all the time, they make mistakes. But they’re trying their best – and that’s as true of the Crawleys [the aristocratic family] as it is of the servants and the locals.’ What it recognises, says Julian, is that most people, most of the time, are trying to do ‘the right thing’. They’re trying to do right by their family, their country, themselves. There’s a deep-seated respect, he says, at the root of the series; to illustrate what he means, he quotes the novelist Edith Wharton: ‘A mother is instructing her daughter, and she says, never give a servant an order – always ask it as a favour.’ The thing is, says Julian, not many people have been writing about all this recently – and what Downton shows is, it’s a sentiment a huge number of viewers connect with, and value.

Downton Abbey: A New Era reunites the original cast, and sees the Crawleys temporarily up-sticks and move to the south of France, after allowing a ‘moving picture’ team to take over their English estate to make a film. Their new home is a villa that has been mysteriously left to Lady Violet (Maggie Smith) by a man she spent ‘a few days’ with, many years earlier.

Alongside the Crawley sisters Lady Mary Talbot (Michelle Dockery) and Edith Pelham, now Marchioness of Hexham (Laura Carmichael), actors Dominic West, Hugh Dancy and Laura Haddock all make their Downton debuts. And the film is a lot glitzier, and jazzier, than earlier offerings, both the TV series and the earlier, 2019, Downton movie.

Fellowes has spoken in the past about how success came to him late in life. Having moved to Los Angeles in his thirties to pursue an acting career, he returned to the UK a few years later without having had his big break. He was already in his fifties when his first film, Gosford Park (2001) won him an Oscar for best screenplay. Three years later, his bestselling novel Snobs was published. He wrote the screenplays for other movies including The Young Victoria (2009).

Marriage and fatherhood came late, too: Fellowes was 41 when he married Emma, now Countess Kitchener. She’s a great-great niece of World War I Secretary of State for War Earl Kitchener; after she became his only living descendant, the Queen in 2012 issued a Royal Warrant granting her the same status to succeed him as a male heir would have had. The couple have one son, Peregrine, 32.

Fellowes is speaking to me from his home in Dorset: in person he’s friendly, down-to-earth, and relatable. As well as promoting the new Downton film, he’s working on another of his historical dramas, The Gilded Age, which has been recommissioned by HBO for a second series, and he’s up against it getting the script together. Whenever Emma hears him saying he should slow down, he says, she always warns him that he’s ‘tempting fate’. For himself, he’s sanguine about the future. ‘I think in the end it will be time for me to slow down and for the next lot to come up. I don’t find that a depressing thought: you have your moment, if you’re lucky – because lots of people don’t have their moment. But sooner or later your moment comes to an end.’

What a moment it’s been, these last few years, for Fellowes – and certainly for now, that end seems nowhere in sight.

« The 4 Peaks 48 Hour Challenge – Meet The Team!
The Plunkett Legacy »