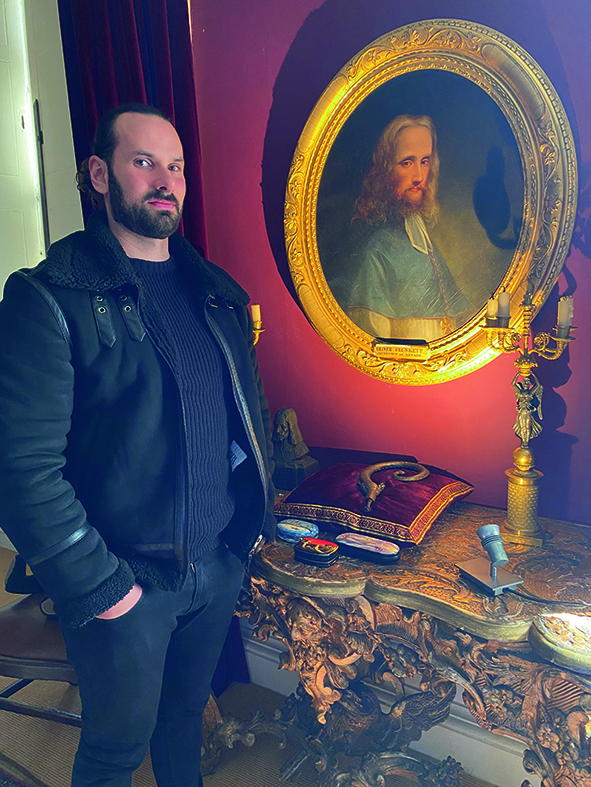 It’s mid-morning in Ireland, and I’m standing beside a portrait of St Oliver Plunkett and a man who looks – well, just like him. Spookily like him. Randal Plunkett, his great-great-great (‘don’t ask me! Great times something’) nephew, agrees it’s a strong resemblance. The shoulder-length locks (Randal’s hair is in a ponytail); the beard. But most of all, the eyes. ‘My girlfriend calls them almond eyes, and it’s true – we both have them.’

Randal, like his illustrious forebear, is unsmiling. The world is in a mess, and he’s big on calling that out, and keen to start the conversation on how to fix it. But first of all, we talk about Oliver, the Archbishop of Armagh and Primate of All Ireland who was executed at Tyburn in London in 1681 for his part in the so-called Popish Plot, despite a widespread belief at the top of the British establishment that he was, in fact, innocent. Plunkett’s real crime was his refusal to betray his Catholic faith. ‘He’s our family’s greatest pride,’ says Randal. ‘He faced being hanged, drawn and quartered rather than give up on what he believed in. He’s the template of what our family aspires to be – he’s truly inspirational, a modern hero.’

Randal, the 21st Lord Dunsany, is a film-maker whose first full-length feature movie, The Green Sea, was released in 2021. He’s tried to interest Mel Gibson, he reveals, in making a film about Oliver. ‘Mel came here to visit, and he was really captivated by the portrait, and by the story.’

We’re talking in the dining room of the Plunkett family castle in the village of Dunsany, an hour’s drive north of Dublin. Most of the castle is a bit run-down these days; but this room evokes to its glory days, and ranged around us are a plethora of Lords Dunsany, each of whom, says Randal, earned his place by safeguarding the family’s land and reputation, and by fighting, as Oliver did, for what they believed in. ‘I’ve not earned my place up there yet,’ he says. But he knows how he wants to do that. Randal is trying to save the world, starting at Dunsany: he’s rewilding his 1,600 acre estate, and so far around half of it is being turned back to nature, with no planting of crops, no tending of plants, no livestock and especially no killing. ‘I became vegan eight years ago, around the same time we started the rewilding,’ he says. ‘Here all lives are equal; there is no killing of any kind here. If there’s a rodent in the kitchen it has to be caught humanely, and then taken to live somewhere else.’

His is a very different stance from that taken by his ancestors: but the crucial thing, Randal believes, is to react to what’s happening around you, not to be a slave to history. ‘My ancestor Horace Plunkett virtually invented modern farming in Ireland, but these are very different times,’ he says. In the past his family safeguarded the local people, providing food and jobs; today, the task is about saving the planet, and he believes if Horace was around today, he’d be making the same calls as Randal: rewilding, he says, is the most responsible response a 21st-century landowner like him can make to the climate crisis.

‘The UN is telling us our planet needs to rewild an area the size of China, so things are pretty scary,’ he says. And while his corner of Ireland might be but a tiny part of the earth’s surface, what he’s doing at Dunsany showcases what’s possible in terms of the earth’s ability to heal itself, when left to its own devices. In the eight years since he turned to rewilding, an additional 20 types of grass have started to grow on the estate – previously, there were only three varieties. Trees have regenerated and multiplied, and there are many more birds including barn owls, red kites, sparrowhawks and woodpeckers, a species that hadn’t been seen in County Meath for a century.

Randal is an unlikely member of the nobility: now 38, he was born in New York City and lived there as a boy, the child of architect parents. His first love was cinema; after the family moved back to Ireland in the early 1990s he embraced a love of heavy metal music, and after school he took a degree in film studies.

But his grandfather’s declining health – and in turn, the demise of his father – forced Randal to take on the responsibility of his birthright. He moved back to the castle, which he today occupies with his girlfriend and their young daughter. Many of the locals, he says, think he’s mad – ‘they think I’m a crazy guy who lives in a castle’ – and some think he’s worse than mad, he’s damaging the farming legacy of his forebears. But Randal is focused on St Oliver’s determination and resolve. ‘I think he was very similar to myself: not willing to compromise,’ he says.

He retains a strong connection with his family’s ancient Catholic faith, and says his baby daughter will be baptised in the family’s 15th century font. Religion is important to him: ‘if you look at any great religion you see the same universals – life is a gift, and your duty in life is to respect your family, and to try not to do any harm, and to appreciate this gift you’ve been given.’

After St Oliver’s execution his mother smuggled the martyr’s crozier, his ring and his pocket watch back to Ireland; and Randal gets them out to show me. The ring, in particular, is beautiful, a collection of stones of different colours. In a house of many treasures, it’s clear these are among the greatest treasures of all.

Returning to the family seat meant film-making had to go on the back burner a while, but Randal never left it behind. The Guardian called The Green Sea an intriguing literary chiller, and said it created the wintery atmosphere of the best ghost stories. Like his 2012 short film Out There, The Green Sea was made at Dunsany, and Randal is now planning another. Life has dealt him a hand with much privilege and many difficulties, but as a film director who owns what is a naturally beautiful film set, he’s determined to put it to use. In fact the next movie brings more of his life together in one place: it will be an eco-horror movie, he says. ‘I’m trying to pull on all the influences around me,’ he says.

Randal isn’t looking for sympathy, but he says many people simply don’t understand the weight that comes with the sort of life he’s been born into. ‘The thing is that with somewhere like Dunsany, you’re never the owner,’ he says. ‘The place owns you. I’m just a caretaker. The place is a giant tapestry, and my role is to add my small bit of the overall picture. You don’t get to enjoy the tapestry, but history judges you for your place in it.’

« A Date With Downton
The TikTok Priest »