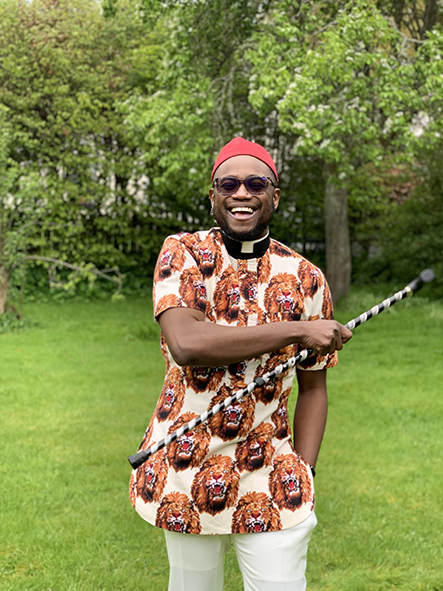 Fr James Anyaegbu grew up in Nigeria, and he now ministers to a parish near Inverness – but his evangelisation stretches far beyond Scotland, as Joanna Moorhead discovers.

The priest, robed for mass, is dancing energetically around his sacristy, to the sound of a track called ‘I know who I am’, and lip-synching the lyrics: ‘All I require for life God has given me…I’m working miracles…’

And Fr James Anyaegbu is indeed working miracles. Because his dance routine isn’t just a warm-up for Mass – the short films he’s recording, like this one, are engaging a huge and growing cohort of young people, who follow him and his energetic videos on the social media platform TikTok. At a time when fewer and fewer youngsters feel connected to the church, but when it’s hard to find anyone under 30 who isn’t mightily connected to their mobile phone, Fr James has taken the gospel to where the young folks are.

Always interested in tech and the potential of digital media for the church, he enjoyed TikTok, in which short videos are shared to a wider audience – but he realised it didn’t offer much in the way of Christianity. And so, in 2020 when the pandemic hit and the churches closed, he decided to change all that. ‘I thought, I can bring God into TikTok,’ he tells me. ‘TikTok is joyful and fun, and people didn’t realise Christianity can be those things, too.’

As well as sharing the good news of the gospel, Fr James uses TikTok to explain elements of the Catholic faith, including what novenas are, why the priest wears particular colours on particular days, what Lenten observances are and why they matter, and why Catholics genuflect when they enter a church. In some of his films there’s just him and some music, or he’s talking to the camera; in others, he’s bopping around in his vestments. In one, he’s seen dancing and singing in a snowstorm – and it’s absolutely not a bought-in backdrop. Because Fr James is the parish priest of St Mary’s in the small town of Beauly near Inverness – more than 4,000 miles from where he was raised, and ordained to the priesthood, in Nigeria. ‘Getting used to the Scottish weather has probably been the hardest part of life here,’ he says. ‘Even summer days here can be cold and wet. It’s very different from Nigeria, where the weather is much more stable and very warm.’

In a neat bit of role-reversal from past centuries, the 30-something Fr James is a missionary priest whose vocation has brought him from Africa to Europe, instead of the other way round. Born and raised in the town of Onitsha, a city on the banks of the River Niger, he felt from a young age that he had a calling to the priesthood. His parents, he says, weren’t keen. ‘We were a very devout Catholic family – I was one of six children – but they wanted me to consider a career as a doctor, an engineer or a lawyer,’ he says. But an aunt who was a nun supported him, and at the age of 11 he got a place at junior seminary. ‘They’re still big in Nigeria,’ he explains. ‘There were as many as 800 boys in the seminary at the time I was there.’ Seminaries like these have now closed in the UK, but Fr James says he looks back on his time at his with positivity and gratitude.

Aged 17 he moved on to adult seminary, and was ordained at the Basilica of the Most Holy Trinity in Onitsha, aged 27. ‘I was put to work in an urban parish, and the priest there gave me plenty of opportunities, especially for music and singing, and also for organising the tech issues in the church,’ he says.

In 2014 Fr James went on holiday to Scotland, to visit a cousin who was working for an oil company in Aberdeen; and after Mass on Sunday at the cathedral he met the bishop, and heard from him about the shortage of priests in the Aberdeen diocese. ‘It’s a huge area, covering the Highlands and big swathes of Scotland, but there are very few priests. I could see this was a missionary area.’

He volunteered his services, and after getting permission from his bishop in Nigeria, he moved to the UK with Fr Max Nwosu, an old friend with whom he had been at seminary. ‘The idea is that we do this work in pairs, because we need to support one another,’ he says. ‘I don’t think I could have done it without someone else who understood where I’d come from, and who ate the same kind of food as me and who understood how difficult it was to cope with the weather!’

As well as Beauly, Fr James and Fr Max serve seven other communities including Ullapool and Fort Augustus – parishes that had been without priests for a long time, but whose parishioners now have Mass said at least every other Sunday. There’s a lot of travelling involved for the priests – their patch is more than 100 miles across. – and it was certainly a bit of a culture shock. ‘It’s not a very diverse part of the country, and we came with our African tradition and culture of liveliness and music,’ remembers Fr James. ‘The congregation seemed very small compared with what we were used to in Nigeria, but the people welcomed us and showed us around – and told us where to buy thermals!’

The people soon embraced their new priests’ approach to a livelier and more music-filled Mass: but Fr James realised that getting young people to come to church was a lot harder in Aberdeen than it had been in Nigeria. But he had a different card to play: his TikTok account. ‘There were very few youngsters at the Masses we said, and I wanted my missionary work to include young people,’ he says. Today he has 540,000 followers on TikTok, and his videos regularly get around 4 million views. ‘People say they like the joyfulness, they like my smile, they like connecting to the church. And I get a lot of positivity for the blessing I always do at the end of the films,’ he says.

Some people have asked whether Fr James is a genuine Catholic priest, which makes him smile his much-loved big smile. ‘It’s made the priesthood relatable, and it’s given people a place where they can ask questions about faith, and learn what it’s about,’ he says.

Fr James’s TikTok account has spawned a movement that’s doing plenty of good work: some of those involved in his global parish have taken it upon themselves to do charity work as an off-shoot, and families in Ghana, Kenya and Cameroon, as well as Nigeria, are now receiving help as a result. ‘If people like what they see in my TikTok posts, and offer me money, I say: give that money to charity,’ he says.

It’s tempting to think that the digital church is the church of the future – but Fr James says it’s not. ‘I believe technology allows us to gather together virtually to express ourselves – but the aim is to get people to attend church, because there’s so much more that being part of a real-life community has to offer.’ But along the way, it’s pretty clear that TikTok has turned out to have a great deal to offer as well.

« The Plunkett Legacy
We Did It! »