Alive Publishing > Bible Alive Articles > We Did It! 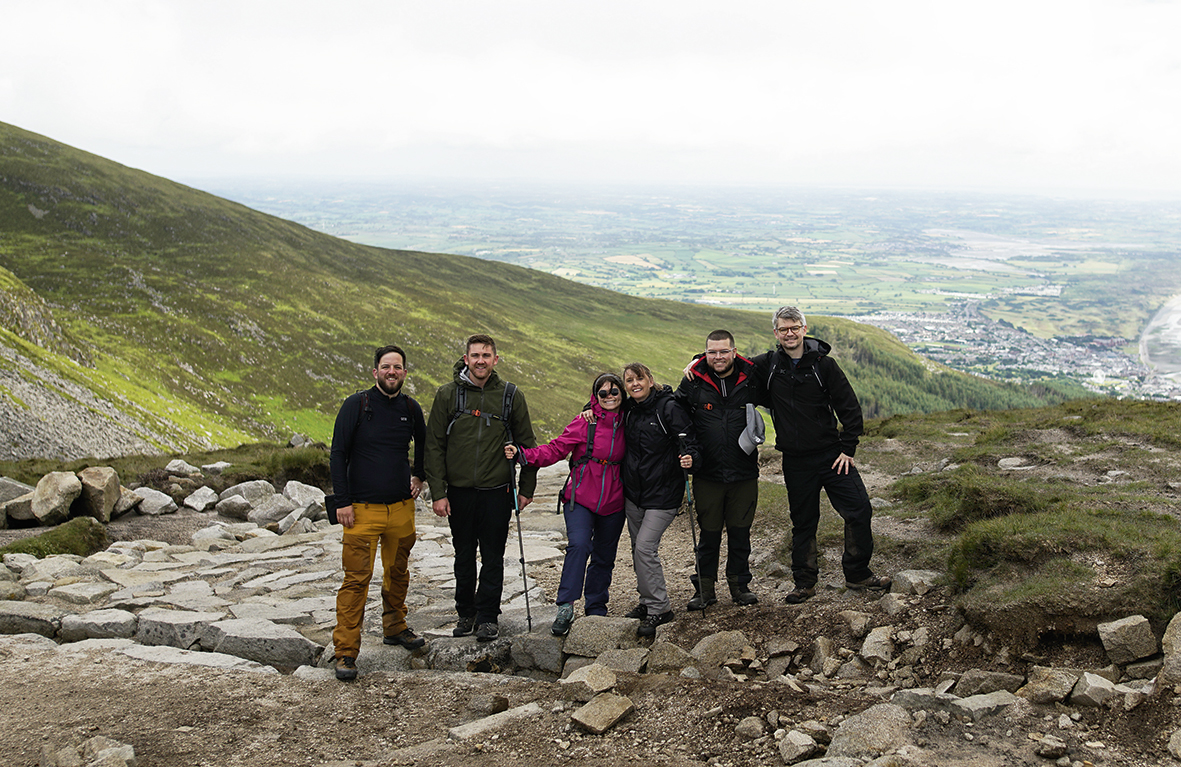 THANK YOU SO MUCH FOR ALL OF YOUR SUPPORT, DONATIONS AND ENCOURAGEMENT, WE COULD’NT HAVE DONE IT WITHOUT YOU!

On Sunday July 3 our intrepid climbers set off to climb the four highest peaks in Ireland (Carrauntoohil, Mweelrea, Slieve Donnard and Lugnaquilla) – in 48 Hours!

They were filled with excitement and foreboding. Excitement at their new adventure; foreboding because one mountain peak is hard enough; four in 48 hours truly daunting.

Even our more experienced climbers, Roland for example, who has climbed many peaks in Hungary, Sweden and Slovakia, and Luke, Matthew and Claire, who had the three highest UK peaks under their belt, had a pit in their stomach. Emma and Bill, although having trained well and both very fit hadn’t climbed a mountain before!! To paraphrase Oscar Wilde; to climb one mountain in a day may be regarded as a misfortune; to climb four in 48 hours like carelessness!!

The Ryan Air flight into Dublin did what it said on the tin: without ceremony or frills it arrived on time, all safe and sound. They were met at Zone 16 (a parking area by Darren and Kathryn seasoned and experienced guides – who it turns out were so much more: friends, supporters, suppliers of energy food and water; oh and drivers. Everyone knew immediately they were in safe and experienced hands!!

The first surprise of the day was learning they were going to climb Carauntoohil that evening! Their excitement and foreboding went up a notch!!

The five hour long drive down to County Kerry, save for a pit stop at Barack Obama Plaza (a service station in honour of a great grandfather of Barack Obama’s great grandfather – who knew?), and pepperoni pizza, a staple for every climber, they arrived in Kerry at 18.00 and were at Cronin’s Yard, the base of Carauntoohill by 19.00.

‘To climb one mountain in a day may be regarded as a misfortune; to climb four in 48 hours like carelessness!!‘

Carauntoohill is the highest peak in Ireland (1021 metres) and a 12.72km climb to the summit. Our climbers were truly daunted – they had literally just got off the plane.

Most people rest a little after travelling let alone embark on a 7 hour climb up Ireland’s highest mountain! Furthermore, the middle section of the climb, is ominously called ‘Devil’s Ladder’ and is a steep, unrelenting scramble up huge boulders and rocks, up an increasingly narrow gully with waterfalls cascading down.

Devils Ladder was less a climb and more a crawl; literally on hands and knees!! The advice from the guides was ‘don’t look down!’

Once through this obstacle and realizing the summit was still some way off, they bravely soldiered on.

The climb to the summit was zig-zag through loose rock and shale (rather like Ben Nevis). The sun was setting and visibility was poor as they traversed bleak and unforgiving terrain which resembled more a moon landing than a beautiful Irish mountain.

The sense of joy and relief on reaching the summit was palpable and exhilarating; at the highest point stands a wooden cross, a simple, sturdy structure, comforting and inspiring against the bleak and windy backdrop of the summit.

Claire: ‘We started the first mountain and I was thinking I’ve got this – that was until we reached the ‘Devil’s Ladder’ and then I really struggled and began to think, ‘Can I actually do this?’  Somehow, don’t ask me how, I just kept going. Reaching the summit was fantastic but on the way back down my feet and toes were so sore. I thought each mountain would get easier; I was wrong, each mountain got harder and more painful but my amazing climbers and guides pulled me through. To be absolutely honest by the fourth mountain I was thinking, ‘Why am I doing this?!! But I dug deep and found within myself inner grit and determination. This much I know: my feet and toes will heal but the memories of climbing the 4 highest Irish Peaks in 48 hours will stay with me for a lifetime!’

Emma: ‘I signed up for the 4 Irish Peak Challenge knowing it would be tough but after getting to the top of the first mountain I quickly realized that this was tougher than I ever could have imagined. I’ve experienced so many emotions – fear, at the summit when it was pitch black and I felt exhausted. Anxiety that I wouldn’t be able to complete the climb and a surge of relief that we were a team and we would finish this together!’

Bill: ‘I thought to myself before the climb: a 4 peak challenge, how hard can that be? I was soon to learn; fatigue, hunger, thirst, an aching body, real fear and real joy on reaching each summit. I have to say that just when it felt impossible or just too much someone in our team would crack a joke or say something encouraging and I would recover and press on. The glorious views of the Irish countryside were incredible and gave me a new appreciation of their beauty. I felt very privileged to be doing this amazing challenge and for such a great cause.’

Roland: ‘Until we took our first step I didn’t believe it was happening – then with the first step we were on our way. We experienced every kind of weather you can imagine and the views were fantastic. I have to say that the full Irish breakfasts on the mornings of the climb and knowing so many people were praying and supporting us gave me the strength to carry on.’

Luke: ‘Before the climb I experienced excitement and apprehension in equal measure – but have to say arriving at the foot of Carrauntoohill and seeing the “Devil’s Ladder” for the first time it was less excitement and more apprehension. Throughout the climb was a physical and psychological test just to keep going but somehow I ploughed on through. The team were great and couldn’t have been better. To be honest it hasn’t quite sunk in that we did it and I am tremendously happy that we have done it and for such a great cause.’

Matthew: ‘We set off to climb Mweelrea in Co Mayo after a full Irish breakfast. It was a tough climb but I was sustained by Kendal mint cake. The clouds descended for the summit ascent which meant rain coats on and head down. I struggled with a very sore left hip which felt like it was giving way but I just kept on going. I saw some amazing sights though; coming over one ridge I saw a whole heard of deer running across a field against a backdrop of forests and mountains. Incredible and inspiring. In the van between mountains I always took my boots and socks off and the blood had drained from my feet and were very sore. It was a hard slog, exhausting, but an experience I would definately do again.’

Sadly, Mike injured his meniscus on his right knee during a training climb of Skiddaw in the Lake District and has been referred to an orthopaedic surgeon. He is hoping once he has repaired and healed that he will finish what he started and complete the 4 Irish Peaks Challenge. Watch this space!! He’ll be Back!!

Please be assured every single penny we receive is gratefully received and will support our goal to provide Bibles for prisoners all over the world.

Our climbers embarked on this challenge because they are inspired by the Letters from the Heart from prisoners all over the world!

We hope we have inspired you and we would be so grateful for any and every donation or sponsorship.

Every donation, every penny, every cent, any morsel or crumb is deeply appreciated because Every Prisoner Deserves a Bible!